Ismail Haniyeh's maiden speech as the head of Hamas' political bureau was uncharacteristically dry and vague for the movement, avoiding potentially divisive policy details and providing leeway for any future shift in positions. 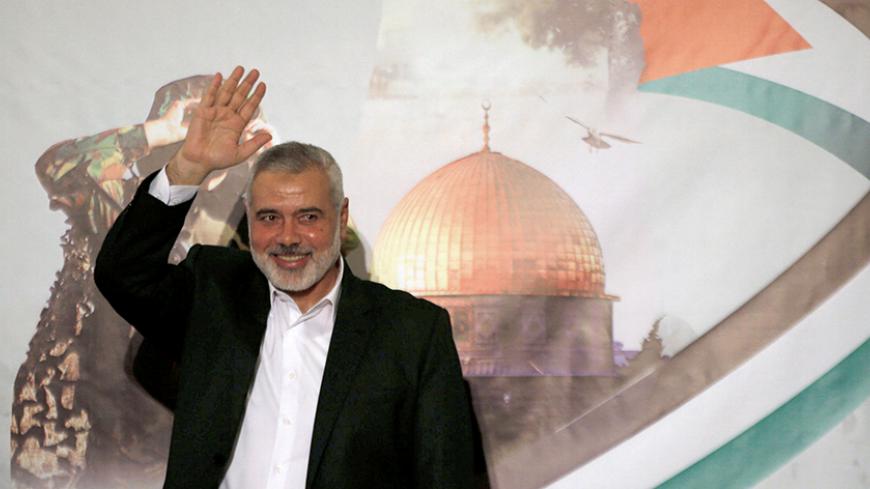 Hamas’ political bureau chief Ismail Haniyeh delivered a speech July 5 at the Movenpick Hotel in the Gaza Strip. It was his first since being elected to head the movement's political bureau May 6.

The two-hour gathering, which included nearly 1,000 political, media and religious figures, was closely followed by writers, analysts and journalists.

Haniyeh’s speech addressed key issues, including Palestinian confrontations with the Israeli forces, especially in the West Bank where Palestinians are facing racial discrimination. He also touched on the Palestinian refugees’ situation in Lebanon, Syria and Jordan, as well as the suffering of Palestinians inside Gaza itself.

Haniyeh announced a political initiative based on common Palestinian goals, a national unity government that meets its commitments toward the Palestinian people, holding legislative and presidential elections, empowering the Palestinian Legislative Council and halting security coordination with Israel.

Mahmoud al-Ajrami, a political analyst and former undersecretary of the Palestinian Ministry of Foreign Affairs, told Al-Monitor, “In his speech, Haniyeh conveyed messages that Hamas is in a good position and that its relations with Egypt are improving, unlike previous years. There could be a thorough review of Hamas’ previous policy toward the events in Egypt.”

Of note, the movement opposed the Egyptian military coup against Egyptian President Mohammed Morsi in July 2013. Later on, there were Egyptian accusations that Hamas was attempting to destabilize Egypt, but there was no proof of such claims.

Ajrami added, “Internationally, Haniyeh sent an important message to Arab and European countries that Hamas is open to any country. But he did not address the possibility of armed conflict with Israel.”

Haniyeh’s speech threw the ball into the court of Palestinian President Mahmoud Abbas. Throughout his 5,000-word written speech, Haniyeh did not mention Abbas, and the omission was widely taken as an insinuation that the movement will pursue relations with Abbas’ rival, dismissed Fatah leader Mohammed Dahlan. Notably, several comrades of Dahlan attended the speech.

Mushir al-Masri, spokesman for Hamas’ parliamentary bloc in the Palestinian Legislative Council, told Al-Monitor, “Haniyeh’s speech expressed Hamas’ strategic vision for the next phase on the national level, in light of positive developments with the different factions in terms of the Palestinian resistance. He also adopted a policy of openness to world countries, while keeping the strategy of resistance and liberation. Haniyeh said that Hamas is on top of the political situation and has sufficient wisdom to manage the political battle just like the military one.”

In his speech, Haniyeh distinguished between the Gulf crisis and Hamas’ interests with the Gulf countries. He praised Qatar’s role in helping Gaza and saluted Egypt. While he effusively thanked Iran, Haniyeh also acknowledged Saudi Arabia's support. However, these messages of appreciation are unlikely to make Hamas any inroads with the different countries, which do not appreciate Hamas’ double standards.

Relations between Hamas and Egypt have recently improved, and the change was reflected in Haniyeh’s speech. Also, Qatari Ambassador Mohammed al-Emadi's July 7 visit to Gaza was affirmation of the ongoing positive ties between Hamas and Qatar.

Haniyeh’s expression of appreciation and thanks to Iran is unprecedented among the Hamas leadership since 2012. Hamas’ former political bureau chief Khaled Meshaal never thanked Iran during his term in office. The change could mean that Hamas under Haniyeh will have a different take on relations with Iran.

Iran continues to support Hamas financially and militarily, and Iranian officials made sure to congratulate Hamas' leaders following the movement’s elections in February.

Political analyst Mustafa Ibrahim told Al-Monitor, “Haniyeh’s speech did not meet expectations. I expected him to be bolder in discussing the current issues, especially with the Hamas leadership shifting to Gaza after being based in Qatar. His speech also lacked clarity on the understandings between Hamas, Dahlan and Egypt and Hamas’ disengagement from the Palestinian Authority. His speech was akin to those by the rest of the Palestinian factions’ leaders. He did not stress respect for human rights and public freedoms and ought to have been clearer and more transparent on the crises in the Gaza Strip.”

Haniyeh’s speech was purely political, devoid of the religious passion and vehemence of Hamas’ usual speeches. The departure could be seen as in line with the movement’s new charter, which focuses more on the national aspect rather than the religious.

Haniyeh’s speech was also rich in terms and jargon from the popular resistance movement. He spoke not only of armed military resistance, as in previous Hamas speeches and statements, but also of resisting the occupation forces through other means such as the boycott, divestment and sanctions movement. This could be the first sign of an evolution in the movement’s political discourse.

Mustafa al-Sawaf, former editor-in-chief of the Hamas-linked Palestinian daily Felesteen, wrote in a July 13 article for the Palestinian al-Resalah newspaper that Haniyeh’s speech, his first written one, was lengthy, redundant and dull, without Haniyeh’s usual emotional power to inspire and persuade listeners.

Haniyeh did not announce any decisive steps with regard to the dissolution of the administrative committee set up by Hamas in March to manage the affairs in Gaza, the reason behind the PA’s sanctions on Gaza. The PA took the establishment of this committee to mean that Hamas was turning its back on reconciliation with Abbas.

A member of Fatah’s Central Committee told Al-Monitor on condition of anonymity, “Fatah was disappointed that Haniyeh’s speech did not bring anything new to the table but rather accentuated Hamas’ existential crisis. We expected Hamas to announce the dissolution of the administrative committee, which it formed as an alternative to the reconciliation government. Haniyeh’s speech showed that Hamas is not ready for reconciliation. The speech was disappointing and an attempt to circumvent reconciliation.”

Al-Monitor learned from Hamas political sources that Haniyeh’s speech had been reviewed by several Hamas leaders at home and abroad. He presented the general political stances of Hamas to Palestinian, regional and international audiences but deliberately avoided discussing the details of controversial issues at home and abroad, such as the rapprochement with Egypt and the movement’s stance on the Gulf crisis. Perhaps Hamas wishes to leave a margin for maneuvering and leeway to shift its positions.