Instead of trying to appease tensions with Egypt and the Palestinian Authority, head of Hamas' political bureau Ismail Haniyeh makes provocative statements about rapprochement with Iran. 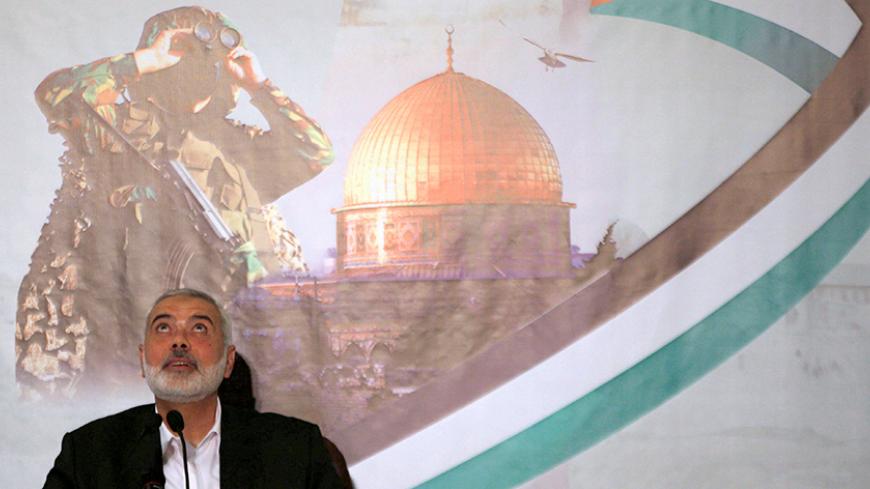 Ismail Haniyeh, the head of Hamas' political bureau, delivered his maiden speech July 5 in the Gaza Strip — the first speech he has made since he was elected to the position about two months ago. Israel’s security apparatus followed the speech carefully in an effort to understand where the Hamas movement will be heading under the leadership of Haniyeh and Hamas leader in the Gaza Strip Yahya Sinwar. In the background hovers President Mahmoud Abbas’ recent disengagement from Gaza.

For one hour and 20 minutes, Haniyeh delivered a prepared speech in which he presented the main principles of his policies and his goals as the leader of the movement. Of course, his speech also served as a vehicle for transmitting messages and signals to his audience outside Gaza in an attempt to extricate Hamas from its current existential crisis.

An Israeli security source who listened closely to Haniyeh’s speech told Al-Monitor that the Hamas leader — formerly viewed as pragmatic — now embraces the most radical policies of the movement. Even more than that: Haniyeh has fallen captive to Hamas’ military wing only so that he can survive as the movement’s leader.

Haniyeh assumed his new role at a time when Hamas is losing the support of its primary backer, Qatar.

Qatar announced July 5 that it is halting its funding of electricity to the Gaza Strip until a solution is found to the crisis between Gaza and Ramallah. Haniyeh himself hoped to live in the Emirates during his term of office, but due to the crisis between Qatar and the Arab world, he is forced to remain in Gaza. At this point he is “imprisoned” there without being able to leave, except if and when Egypt is gracious enough to allow him to exit and enter via the Rafah border crossing.

“Haniyeh thanked Qatar effusively, despite the fact that Qatar has turned its back on Hamas; he did this to leave a window open for better days in the future. But simultaneously he sent clear messages to Iran in an attempt to appease the only guardian that the movement has in the world,” said the security source on condition of anonymity. To mollify the Iranians, Haniyeh even declared that the Jerusalem Western Wall is actually a wall of the Al-Aqsa Mosque, and that the Jews have no rights in Jerusalem. These words were not uttered out of the religious passion or vehemence of a diplomatic maiden speech. Instead, they were aimed at external listeners to signal that Hamas has no intentions of reaching any kind of compromise with the “Zionists” in his term of office.

Haniyeh even stated explicitly that any diplomatic arrangement that US President Donald Trump’s administration is trying to achieve with Abbas would constitute an infringement on the legitimate rights of the Palestinian nation. He insisted that Hamas would stand firm in its efforts to halt any such arrangement.

An important reminder of relevant past events: In January 1996, Haniyeh attempted to run in the elections held for the Palestinian Authority’s (PA) Legislative Council. The only reason he removed himself from the list was the strong opposition expressed by Hamas’ political bureau, which viewed his rebellious behavior as akin to mutiny.

Before his anticipated election to the role of political bureau head, Haniyeh initiated an amendment to the Hamas charter together with former bureau head Khaled Meshaal. A week before the end of his term of office (May 1), Meshaal even announced that Hamas would be willing to recognize a Palestinian state within the 1967 borders. As reported by Al-Monitor in May, he uttered these words to convey a more pragmatic outlook to his successor. Only two months into his new role, Haniyeh used his first speech to block the path that Meshaal had paved for him.

Haniyeh’s speech provides much material for thought on the path that the movement will adopt from now on. We learn much from the speech content not only about future policy on such fateful issues as Hamas’ relations with the PA and jihad vis-a-vis Israel, but also about the power struggles within the movement itself. Israel’s security people initially thought that Sinwar would push to iron out the difficulties with Iran so Hamas could become its protege. But now, in contrast, security experts feel that Sinwar closed a deal with Egypt behind Haniyeh’s back — a deal involving former Fatah senior Mohammed Dahlan.

According to the Israeli source, Haniyeh does not trust Egypt and Egyptian President Abdel Fattah al-Sisi, who does not allow him free access to the Rafah border crossing. Instead, he prefers Iran. According to the source, Haniyeh thinks that Iran will support Hamas’ goals unconditionally and that, in the long term, it will be worth their while. In Haniyeh’s view, should Hamas remain under Egypt, it will remain a dying movement. Any “oxygen” — namely opening crossing points, providing electricity or finances — Hamas receives from Egypt will be carefully doled out to enable Hamas to survive, but never thrive.

What kind of future does Haniyeh promise the Gaza residents? The man who was born and grew up in Shati refugee camp, cut from the same Hamas cloth as the others, a leader whose acquaintances sing his praises as a "man of the people" who emerged from the grassroots, now makes a speech that deprives them of all hope. Only a continuation of the armed conflict, without promises of food and health care.

“He is like any sophisticated politician,” said the Israeli security source. “He is more concerned about himself and retaining his leadership. What Haniyeh wants — first and foremost — is the support of Hamas’ military wing, which dictates policy to its leaders. Then he wants to find a guardian to replace those who have abandoned the movement.”

In other words, he noted, Hamas in the era of Haniyeh and Sinwar have abandoned their people and are thinking only of themselves. “Instead of understanding the impossible conditions [in Gaza] under which the movement is supposed to rule, Hamas has radicalized its approach and viewpoint,” he said. “This is a lack of awareness for which there is no rational explanation. And we have already learned in the past that [Hamas'] decisions are not always rational. Instead of trying to reach understandings with Abbas, who can still save Hamas from complete collapse, Haniyeh issues a writ of divorce to the PA. Abbas says that he isn’t willing to retreat and capitulate; he won’t dismantle the civil committee established by Hamas in the Gaza Strip, which serves as the government of Gaza for all intents and purposes. Instead, Haniyeh warmly thanked Iran for the assistance it granted to Hamas, and mainly the Hamas Izz ad-Din al-Qassam Brigades for their boundless support of the armed struggle. This lit a very large red light in Cairo as well.”