Egypt arrests citizens for showing solidarity with Palestine, while claiming support for Palestinians 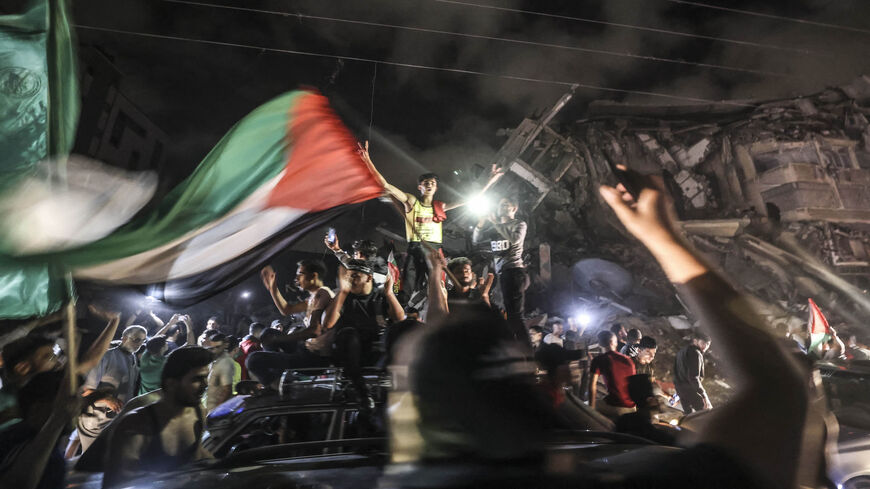 People wave the Palestinian flag as they celebrate in front of a destroyed building in Gaza City early on May 21, 2021, following a cease-fire brokered by Egypt between Israel and the ruling Islamist movement Hamas in the Gaza Strip. - Mahmud Hams/AFP via Getty Images

CAIRO — Human rights lawyers in Egypt told Al-Monitor that Egyptian security forces arrested a number of citizens in different parts of the capital Cairo, for raising the Palestinian flags in solidarity with the besieged Gaza Strip and Jerusalem. They said that some were forcibly disappeared, while others continue to be detained waiting for the Supreme State Security Prosecution to review their cases.

Hazem Hosam Eddine, a lawyer for an Egyptian human rights center he did not want to mention, recounted that he was approached by the family of Ahmed Alaa, who was arrested May 14 after attending the Friday prayer in one of the Dokki district’s mosques. Hosam Eddine said Alaa was just walking in the street while raising the Palestinian flag, without even chanting any slogans or being part of a group, when he was apprehended.

Hosam Eddine told Al-Monitor via phone, “After communicating with Alaa at the police station, [I found out] that other citizens are also detained for the same reason, namely for showing solidarity with Palestine and the Gaza Strip.”

Commenting on the legal developments, he said that he is waiting for the prosecution’s review to learn about the charges pressed against Alaa and others. He noted that the prosecution was supposed to review the case on the day of the arrest. Yet they are still illegally detained at the police station, he added.

Alaa is among other Egyptians arrested for showing solidarity with Palestine. Nour al-Hoda Zaki , a prominent journalist, was briefly arrested at Tahrir Square May 13, for wearing the Palestinian keffiyeh and raising the Palestinian flag. She was released hours later.

Speaking to Al-Monitor, Zaki said she was mistreated and threatened of being taken to prison. She added that security forces detained her for hours inside a residential building in Tahrir Square, before the officer in charge of her arrest received a phone call for her immediate release.

Another lawyer who declined to be named told Al-Monitor that there are nearly 17 detainees, all of whom are minors, at a police station in downtown Cairo. He said that they were all arrested for showing solidarity with Palestine and for protesting while raising the Palestinian flag.

The lawyer noted that one of the detainees was arrested on charges of “burning the Israeli flag,” according to the police report. The lawyer views this move as “an attempt by the security forces to pin any charge against the youth who showed solidarity with Palestine and condemned the attacks on the Gaza Strip.”

The lawyer noted that the detainees’ cases are still under consideration at the police department, before any action is taken against them: Either they are released, referred to the prosecution for further investigation or kept in custody illegally. He added that the law stipulates referring the detainees to the Public Prosecution within 24 hours of their arrest, while some of them have been there for more than three days now.

The arrests against those who showed solidarity with Palestine and the Palestinians come at a time when the Egyptian Foreign Ministry expressed clear condemnation of the Israeli shelling on the Gaza Strip and attempts to evict the residents of the Sheikh Jarrah neighborhood in East Jerusalem.

Speaking during a UN Security Council virtual meeting May 16, Egypt’s Foreign Minister Sameh Shouky condemned the Israeli actions in the Palestinian territories. He said that there will not be any peace in the absence of a just and comprehensive solution to the Palestinian cause, and denounced the forced displacement and confiscation of houses in Jerusalem.

In the same vein, Boycott, Divestment, Sanctions (BDS)-Egypt called for the release of BDS Egypt Coordinator Gen. Ramy Shaath — the son of Fatah official and former Palestinian Minister of Foreign Affairs Nabil Shaath — and BDS member Mohammad al-Masri, who have been detained for nearly two years on charges of terrorism.

Mahmoud Bayoumi, a Turkish-based political analyst, told Al-Monitor via internet that the arrest and imprisonment of Egyptians for showing solidarity with Palestine shows the contradiction that the Egyptian administration itself expresses when dealing with the Palestinian cause. While the official authorities say that they support the Palestinians, they are arresting their supporters, he noted.

He added that it is clear the Egyptian authorities seek to impose their vision about solidarity with important causes, and they do not want any popular movement even if they have the same orientations. They fear any demonstrations or protests in support of Palestine, because they do not want things to get out of control and turn into demonstrations against the Egyptian authorities themselves, Bayoumi concluded.