Ebrahim Raisi's trip to Moscow is unlikely to further elevate relations between the two countries. 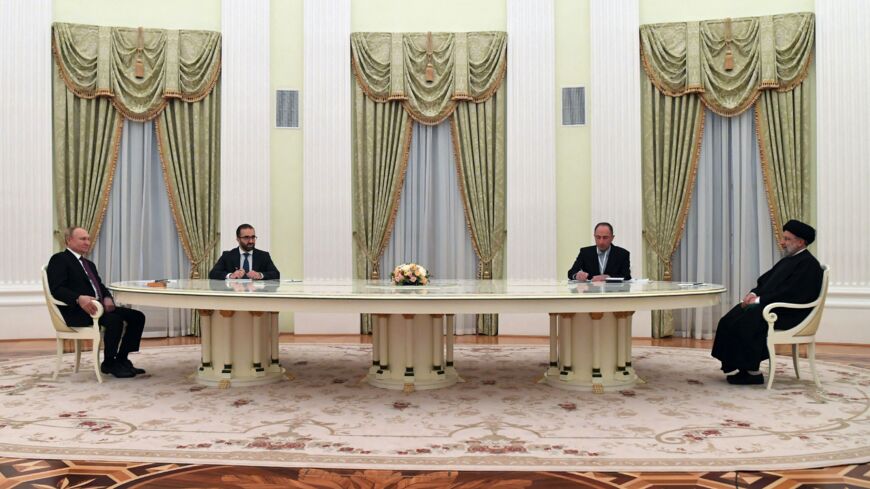 "We want our relations with Russia to be strong and comprehensive. These relations will not be short term or positional, but permanent and strategic," the Iranian president said. In addition, he thanked his Russian counterpart "for facilitating Tehran's entry into the Shanghai Cooperation Organization."

The Iranian leader also noted "a very good experience of cooperation between Iran and Russia in Syria in the fight against terrorism."

"This experience can create prerequisites for its expansion and use in other areas," he said. "Under the current conditions, it is possible to develop cooperation in the fields of economy, politics, culture, science, technology, defense and military spheres, as well as in security and space issues.”

In turn, Putin — alongside other issues — mentioned the situation in Afghanistan.

“Now, of course, both you and us are concerned about the situation that is developing in Afghanistan. I would like to discuss all these issues with you, to know your position on this problem,” he said.

Contrary to expectations and some statements prior to the Iranian leader's trip to Russia, Raisi's visit failed to achieve a major breakthrough and is unlikely to bring relations between the two countries to a new qualitative level. The two sides have been working to boost trade and economic ties in particular, although an additional impetus may be given to the development of the military-political dimension of interaction.

Iran announced last month that it was close to finalizing a 20-year agreement on strategic cooperation with Russia, but so far it seems that the parties have not been able to agree on its terms. The Iranian president brought a new draft of the agreement to Moscow and submitted it to Putin for consideration. If this option is ultimately rejected, it could be a new disappointment for Tehran, which is trying to conclude long-term cooperation agreements with all friendly countries.

"We handed over to our Russian colleagues a document on strategic cooperation between the two countries, which can determine prospects for at least 20 years," he said. According to the Iranian president, “The current level of trade and economic relations [between Iran and Russia] does not cause satisfaction. … We can increase the level of our trade and economic cooperation by several times.”

This agreement could revive Russian-Iranian trade and economic relations, which have faced a stage of long-term stagnation. The “record” amount of trade between the countries in 2021 — amounting to $3.3 billion — should hardly be considered a great success. For comparison, trade between Russia and Turkey is at about $22 billion to $25 billion annually.

In addition, Tehran has not yet paid its debts for the construction of the Bushehr nuclear power plant, which is being created by the Russian state-owned Rosatom. American sanctions also prevent the development of bilateral trade and economic ties. Russian Railways, another state-owned entity, ceased implementation of its projects in Iran in April 2020 due to fears concerning US sanctions. In turn, this decision has a negative impact on the implementation of other programs within the framework of the Russian-Iranian initiative to create the North-South Transport Corridor.

Also, rumors about the conclusion of an agreement on military-technical cooperation during Raisi's visit to Moscow — which provided for the possibility of Iran purchasing Russian military equipment for a total of $10 billion, including S-400 air defense systems and Su-35 fighters — did not pan out.

However, this does not mean that such an agreement will not appear in the near future. A Russian military analyst speaking to Al-Monitor on condition of anonymity said that the actual amount of contracts for the supply of Russian weapons to Iran could slightly exceed $2 billion, which is exactly the amount Moscow would be ready to provide as a loan to Tehran, which lacks cash.

Yet one military-political action that should give Raisi’s visit to Moscow greater resonance are the planned joint naval exercises between Russia, China and Iran in the Indian Ocean. The announcement of the upcoming drills came against the backdrop of negotiations between the leaders of the two countries. Notably the day before the Iranian president’s arrival, a detachment of ships of the Pacific Fleet, consisting of the missile cruiser Varyag, the large anti-submarine ship Admiral Tributs and the large sea tanker Boris Butoma, anchored in the roadstead of the port of Chakhbahar in Iran.

In addition, Yemen’s Houthi rebels, who are armed by Iran, claimed responsibility for an attack on oil infrastructure facilities in Abu Dhabi on the eve of the visit. Such an act would not have been possible without Tehran’s approval.

Developments like this make Russian initiatives that relate to the formation of a common security system in the Persian Gulf and the convening of a corresponding conference sound more urgent.

“A conference that would bring Iranians and Arabs together where Iran would not be the subject of discussion and where each side would lay their concerns on the table. Missiles that not only Iran possesses. The Arabs are also developing missile production. Concerns about Yemen, Syria, Iraq and many other hot spots, which, one way or another, cause differences between other countries [should be discussed at the conference]. This is our concept,” said Russian Foreign Minister Sergey Lavrov on the eve of Raisi’s visit to Russia.

In particular, as Putin stated, it is important for Moscow to know Tehran's position on reviving the 2015 agreement on Iran’s nuclear program known formally as the Joint Comprehensive Action Plan (JCPOA).

"Of course, it is very important for me to know your position on the JCPOA," Putin said at the Russian-Iranian talks.

Tehran likely wants to enlist more support from Moscow in this matter, but so far Russia's approach looks quite balanced. According to comments from Lavrov, there is “real progress” in the dialogue on the Iranian nuclear program — in particular, the desire of Iran and the United States to “recognize specific concerns” of both states and understand how they can be “addressed in the overall package.”

“We hope that an agreement will be reached. For this, it is important that the Iranian side is as realistic as possible and cooperates with the [International Atomic Energy Agency], and that the Western participants in this negotiation process do not try to create psychological tension by periodically planting criticism of Iran and making demands on it in the media,” Lavrov said.

Nikita Smagin, a correspondent for TASS in Iran and an expert of the Russian Council on International Affairs, told Al-Monitor, “We should not forget about the ongoing successful interaction between the two countries in Syria, despite the fact that it was believed that Tehran and Moscow in the Middle East are incompatible forces, and the days of this cooperation are numbered. On the whole, the parties have reached for an approach when it is possible to concentrate on coinciding interests and systematically build up cooperation. Breakthrough solutions here are rare, but slow and painstaking work allows us to reach new results. And it is in this vein that Raisi's current visit to Russia should be viewed.”