The impeachment motion was triggered by a leaked document showing that the health minister had received an imported vaccine, contradicting his earlier claims that he had been jabbed with a government-promoted, domestic one. 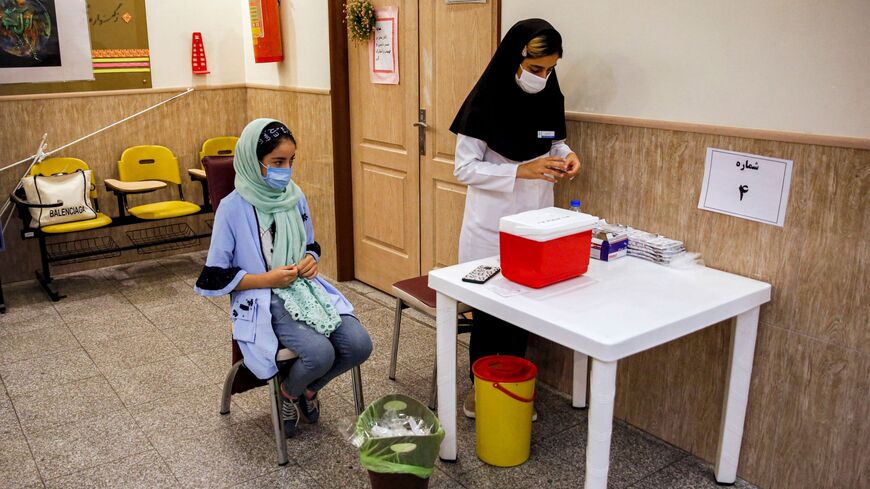 A student waits to receive a COVID-19 coronavirus vaccine dose at a school in Iran's capital Tehran on Oct. 7, 2021. - AFP via Getty Images)

A number of lawmakers in Iran's conservative parliament are advancing an impeachment bid against the country's health minister, marking the first such attempt against the government of hard-line President Ebrahim Raisi.

During an open meeting Jan. 11, the impeachment motion's architect, Kamal Hosseinpour, criticized the health minister's personal preference in COVID-19 vaccination, and his decision to take an imported dose instead of an Iranian one.

"This is inappropriate and [reveals] a significant flaw," the lawmaker said.

Earlier this month, Health Minister Bahram Einollahi proudly declared, "Many of the cabinet members, inducing myself, have received the domestic vaccines." The minister was making the remarks at a ceremony inaugurating the clinical research phase of one of five Iranian vaccines.

The claim, however, was brought under serious questioning a week later, as a picture of the minister's vaccination certificate went viral, bearing his identity details, while indicating that he had been jabbed with the imported Russian Sputnik vaccine.

Health Ministry officials rushed to address the flaring public anger. While they did not question the authenticity of the certificate, the officials threatened legal action against "a medical doctor" who "breached privacy laws" by leaking the document.

And the ministry's public relations chief said Einollahi had received both Iranian and Russian jabs, describing the controversy as "a targeted foreign media campaign meant to tarnish public trust."

In the meantime, government officials, including the health minister, have been promoting multiple indigenously developed vaccines. But across Iran's social media platforms, the leaked document was interpreted as a proof of the minster's "lie" and fueled rage among citizens, who have been incessantly told to roll up sleeves for the national vaccines.

As the impeachment bid was being discussed in parliament, the health minister was delivering a boastful speech elsewhere in Tehran and chose not to address the scandal.

Instead, he announced a milestone in the country's "historic" vaccination program that has covered "as many as 90% of Iranians with at least one dose," while 79% are also registered as double-jabbed. And all this, he declared, has been achieved "despite unjust sanctions" and marks "the enemy's absolute defeat in its sanctions regime."

Given the close convergence between the Raisi administration and the parliament already packed with his loyalists, it is not immediately clear to what lengths the impeachment bid could go. But it would be a rare challenge against the hard-line cabinet and could mar the vaccination progress, which the government has been passionately proud of.

"We are not disclosing the names of the fellow parliamentarians, who have already signed the impeachment bid," the lawmaker behind the motion said, because he feared that "certain people" within the Raisi government circles "will waste no time to begin lobbying to talk the lawmakers into withdrawing their signatures."