While Iran’s Health Ministry had promised to keep everyone in the right queue for the coronavirus vaccination, there are media reports that the well-connected are taking their jabs and skipping the lines. 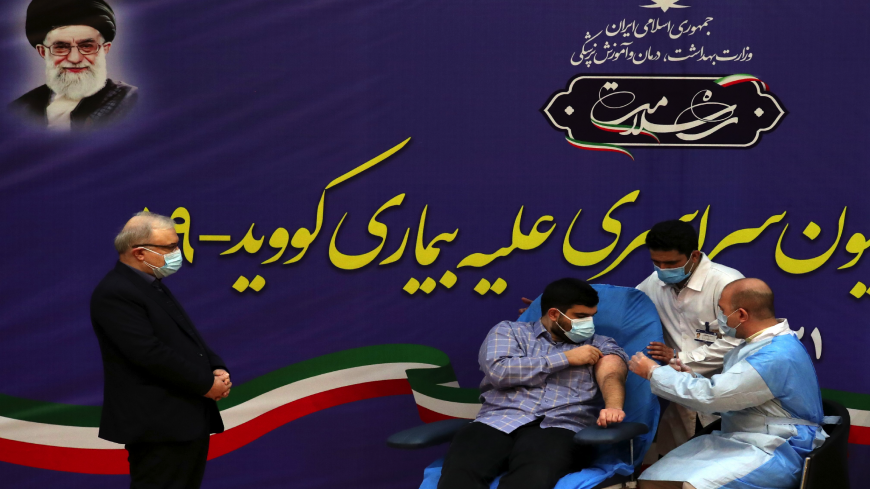 Iranian Health Minister Saeed Namaki (L) watches while his son Parsa receives the first COVID-19 vaccine as the country launches its inoculation campaign, at the Imam Khomeini Hospital in the capital, Tehran, on Feb. 9, 2021. - ATTA KENARE/AFP via Getty Images

When Iran’s vaccination officially kicked off with a televised, glamorous ceremony in Tehran Feb. 9, promises were made about a phased and fair distribution starting with hospital first responders and followed by senior citizens. Under such a scheme, hospitals were allocated their very specific rations.

However, a report by Mizan News Agency run by Iran’s judiciary says in some cases connections have served the basis and allowed for many to receive vaccines meant for others at the moment. “Uncles who were vaccinated without standing in the queue,” the sarcastic headline said of those instances in which the jabs for individuals who fail to show up or refuse to get them are given to others who enjoy connections to hospital managers.

In an interview with the agency, Hossein Kermanpour, the public relations chief for Iran’s Medical Council, said he could not rule out such a possibility. He referenced the fact that those vaccines need to be kept at special freezing temperatures and thus have to be given to others or otherwise thrown away if the designated individual does not receive them. Yet he described the reported discrimination as an example of mismanagement that could leave individuals who truly deserve the doses with no vaccine.

Those reports, however, have not come as a surprise in a country that has seen over 60,000 of its people perish due to the pandemic. Steadily keeping the title of the worst-hit nation in the Middle East since the outbreak of the virus, Iranians have been pressing their government to launch and speed up vaccination. Amid their desperation, they have also debated reports that vaccines are prioritized for officials in a system where corruption has long been a chronic malady.

After the outbreak of the pandemic in Iran, Supreme Leader Ayatollah Ali Khamenei went through a draconian set of personal protocols, turning all his typically crowded speech venues into empty halls. For over a year, Khamenei socially distanced himself from almost everyone and refused to receive even top government officials.

Still, since last month he has made more public appearances, including on Feb. 7 when, unlike his pandemic-era speeches that were solely televised, he was greeted by a large group of air force officers. Those events have only fueled speculations that the 81-year-old leader grabbed his share of the vaccine weeks before any rollout in his country. His office has neither rejected nor confirmed those speculations.

In a speech Jan. 8, Khamenei also openly banned imports of any vaccines developed in the United States and the United Kingdom, a message that outraged many Iranians right at a moment when they were campaigning for a speedy vaccine rollout.

Iran’s vaccination was introduced with the Russian Sputnik-V and has continued with other imported products from such countries as China. Nevertheless, the Islamic Republic is banking also significantly on its own vaccines. The entity in charge of the indigenous version is the Headquarters for Executing the Order of Imam Khomeini, a financial conglomerate controlled by the supreme leader.

In the latest update on the work in progress March 9, the center’s officials expressed confidence that their vaccine, dubbed Iran Barakat, will bring along “minimum side effects” and be made available for public distribution by June.