The new promise marks yet another delay of previously announced plans for an inclusive national vaccination rollout highly demanded by the Iranian public. 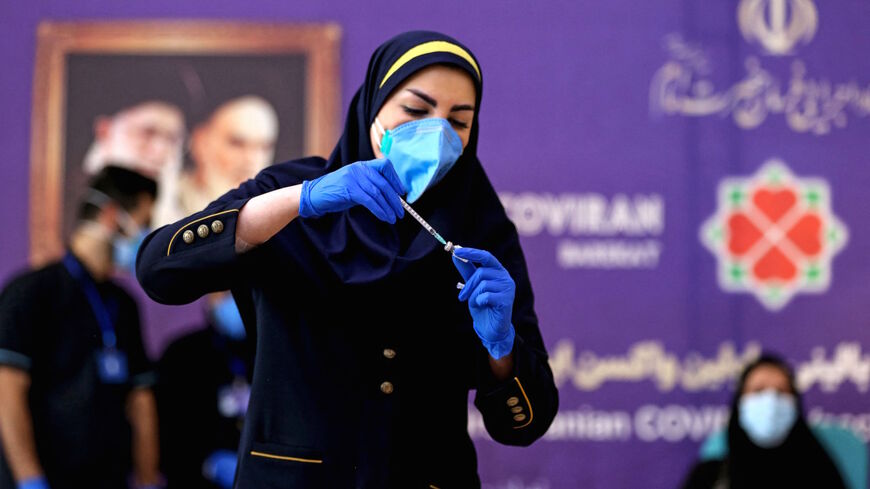 An Iranian health worker prepares an injection of the locally made COVID-19 vaccine during the start of the second phase of trials in the capital Tehran, Iran, March 15, 2021. - Atta Kenare/AFP via Getty Images

Iran's health officials said June 1 that a far-reaching coronavirus vaccination program will start in September. The statement was last in a series of unfulfilled promises with varying dates for a much-needed vaccination plan covering all members of the public.

According to the spokesman for Iran's National Coronavirus Task Force, Alireza Raisi, the public phase will kick off once several designated high-risk groups have received their two jabs. The program, he said, will continue until the end of 2021.

Iran's rollout began with frontline medical staff in all hospitals nationwide in February. Months on, the piecemeal program has reached senior citizens at the age of 70, with only 3.7 million Iranians of the entire population of 85 million having received their first jab.

The vaccination has been administered with multiple imported products, the bulk of which has been supplied by Russian Sputnik V and the Chinese Sinopharm. But Iran has been hoping to accelerate the process using its own domestically developed vaccine, known as the COV Iran Barakat. The project has been spearheaded by the Executive Headquarters of the Imam Directive, a financial empire that only reports to Iran's Supreme Leader Ayatollah Ali Khamenei. The center said it will have produced some 30 million doses by September.

Earlier this week, the producer also said as many as 1 million doses are now ready to be administered before being delivered to the Health Ministry. The vaccine's first trial was conducted December last year and the mass production line was launched in late May. Iran's health officials have offered assurances about the efficacy of the vaccine, also boasting about "a backlog" of requests from Iranians for voluntary shots.

Much of the vaccination of those under the age of 60 is now planned to be carried out using the same Iranian product. As the vaccine has yet to pass international approvals, the announcement has fuelled concerns among some Iranians, who have previously cast their distrust on the homemade vaccine.

During the pandemic's peaks over the past 14 months, Iran has seen only a few brief periods of respite while it has continued to be the Middle East's worst-hit nation. Some 3 million cases have been officially confirmed since the onset of the pandemic that has claimed over 80,000 lives.

After an exponential growth in May, the Health Ministry is now expecting the daily mortalities to fall back to two-digit figures by the end of June. Amid the slow-paced rollout, which has been characterized with corruption and a lack of transparency, such positive statements could mean a lowered guard and have sparked fears about a looming "fifth wave" of deaths and infections.