The denial added to the chaos and confusion surrounding Iran's piecemeal rollout, which has reached only 2.3% of its population. 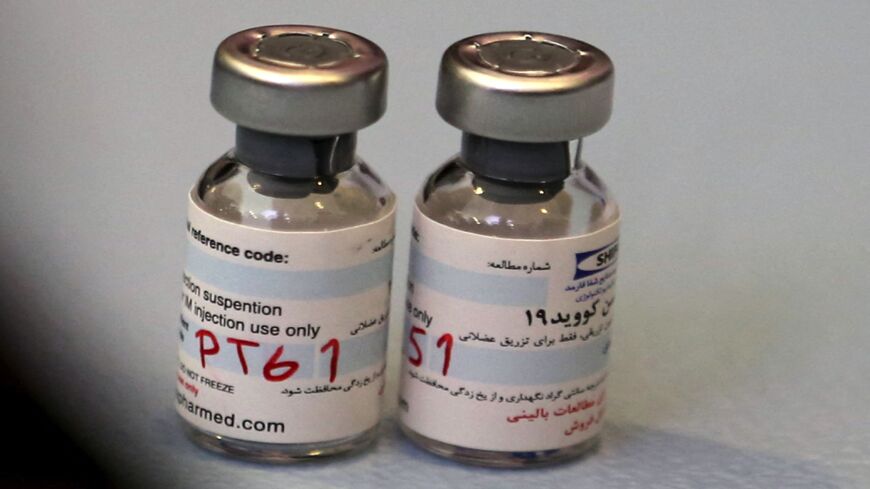 A picture shows vials of the locally made Iranian COVID-19 vaccine during the start of the second phase of trials in the capital, Tehran, on March 15, 2021. - ATTA KENARE/AFP via Getty Images

Iran's health officials dismissed several statements about a "US sabotage attack" or halts in the country's indigenous vaccine projects. "The production line of COV-Iran Barakat is operating with full capacity," read a statement issued by the state-funded Shifapharmed Industrial Group, which is involved in the production of one in a long list of vaccines Iran says it has developed to immunize its population against multiple variants of the coronavirus.

"The production of Iran's domestic COVID-19 vaccines has been delayed due to an American hostile act," senior conservative Iranian pundit Mohammad Marandi was quoted as saying by Iran's state-funded English-language newspaper, Tehran Times. However, Marandi denied the statement immediately and the Tehran Times tweet with the quote was removed afterward.

Last month, Hojjat Niki-Maleki, spokesperson for the business empire funding the COV-Iran Barakat project, declared that a batch of 1.2 million doses had been rendered useless "due to a problem." He did not offer further details.

And on Wednesday, senior Iranian epidemiologist Minou Mohraz drew the ire of the Health Ministry with controversial comments about a joint Iranian-Cuban vaccine project. Mohraz stated that despite an earlier agreement, the Cuban side had withdrawn its involvement. In a strongly worded reaction, the spokesperson for Iran's Food and Drug Organization, Kianoush Jahanpour, rejected the epidemiologist's "baseless" remarks, adding that the stance was her personal opinion and she never had an official link with the National Coronavirus Taskforce. Mohraz is widely known in Iranian media as a member of the Scientific Board of the taskforce.

The contradicting statements further blurred the prospects of the vaccination rollout, promises of which Iranian officials have repeatedly postponed.

As of July 7, a total of 4.5 million doses of mostly Russian and Chinese vaccines had been distributed nationwide. Out of the country's 85 million population, only some 2 million have received their two jabs.

Iran is currently grappling with what health officials have called a "fifth wave" of the pandemic. The new resurgence involving the Delta variant is hitting the impoverished Sistan and Balouchistan province hardest. Also on Thursday, officials in the southern city of Bandar Abbas reported a "super-critical emergency situation," while the biggest cemetery in the capital, Tehran, was placed on a state of alert in anticipation of an influx of corpses.

As the Middle East's worst-hit nation, Iran's official death toll from the pandemic stood above 85,000 on July 8.

The disorderly vaccination has also come in contrast with statements from Iranian officials in open praise of their indigenous vaccine projects. Only last week, Health Minister Saeed Namaki spoke of how "Iran will soon become the center for the world's oppressed to get vaccinated" against the virus.

"I wish we had stopped boasting with slogans [and instead] maintained better ties with the world," wrote Saeed Reza Mehrpour, a well-known hospital director in Tehran, in scathing criticism of the Islamic Republic's overall vaccination policy. "I wish we had simply acted with humbleness by purchasing vaccines for our people from credible international companies."