A rapid outbreak of omicron, the most recent coronavirus variant, has health officials in Iran calling for severe restrictions once again. 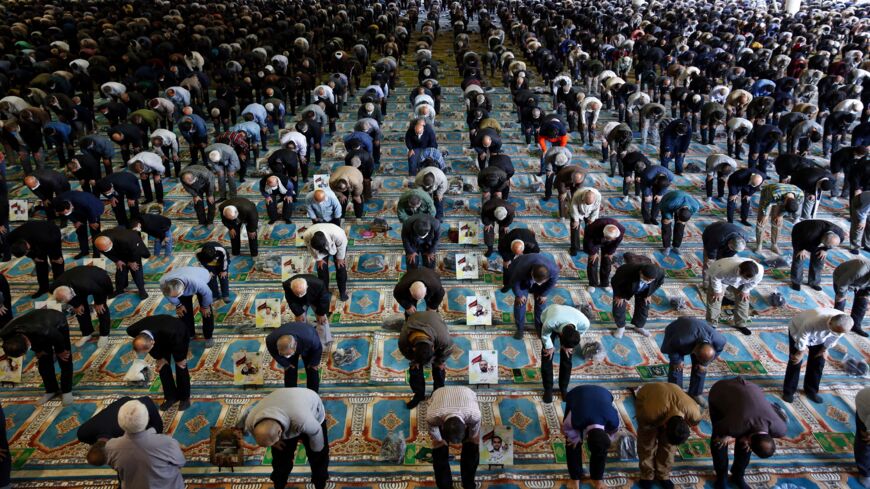 Mask-clad Iranians gather in a mosque in the capital, Tehran, to perform the Friday prayers for the first time after authorities eased some restrictions put in place for over a year in a bid to stem the spread of the coronavirus, on Oct. 22, 2021. - AFP via Getty Images

A senior Iranian health official warned that unless measures are tightened it will only be a few weeks before the new coronavirus variant, omicron, dominates the country.

Hamid-Reza Jama’ati, who chairs the scientific committee of the National Coronavirus Taskforce, advised the Iranian government to reinstate strict measures for at least four weeks to curb the new variant. Those restrictions, according to Jama’ati, should include a full closure on schools, universities, restaurants, hotels and family gatherings.

Over the weekend, the Health Ministry said it had identified the first omicron case in an Iranian national returning from the United Arab Emirates.

The announcement came as Iran sees a significant slowdown in overall coronavirus cases after the government of hard-line President Ebrahim Raisi accelerated a wide-reaching vaccination rollout that has so far seen over 50 million out of the country’s 85 million double-jabbed. Three out of four Iranians have also received at least one dose of the vaccine.

With the curve currently flattened, the latest Health Ministry statistics showed the daily death toll at 41, as the number of new cases dropped below 2,400, marking one of the lowest figures since the pandemic rocked the country in February 2020.

Responding to the omicron alarm bells raised by the epidemiologists, officials in the capital, Tehran, said a decision was to be made on partial or full closure of businesses in the megacity. Raisi urged the Iranian public to exercise “more caution” to prevent the spread of the new variant. Yet he did not specify any new measures, and European-style lockdowns at a national level were nowhere in sight.

As the omicron variant was identified, Iranian officials also announced that a homemade “special omicron detecting kit” was already being distributed in hospital labs nationwide. In April 2020, at the peak of the pandemic in Iran, the Islamic Revolutionary Guard Corps (IRGC) claimed to have developed a system named Mostaan that could detect the coronavirus within a 100-meter radius. The device, which was never used, triggered mockery and serious questioning from the Iranian scientific community.

Given the consecutive periods of chaos and confusion in Iran’s pandemic prevention and management over the past two years, the new variant is now fueling worries that delays in introducing fresh regulations may bring back the days that saw as many as 700 coronavirus deaths.

Omicron’s arrival in Iran coincides with celebrations that could further complicate the prospects. On Tuesday, Iran is set to mark Yalda night, an ancient festival that ushers in the winter season. The rituals highly revered and observed by Iranians are characterized by crowded indoor family gatherings.

With guards currently lowered by both the public and the government, some believe the all-nighter will only accelerate a much-feared resurgence of the pandemic’s nightmares in a country that has already been the worst-hit in the Middle East.