With no plea bargain to help him in his graft trial, former Prime Minister Benjamin Netanyahu is fighting to keep control over his party. 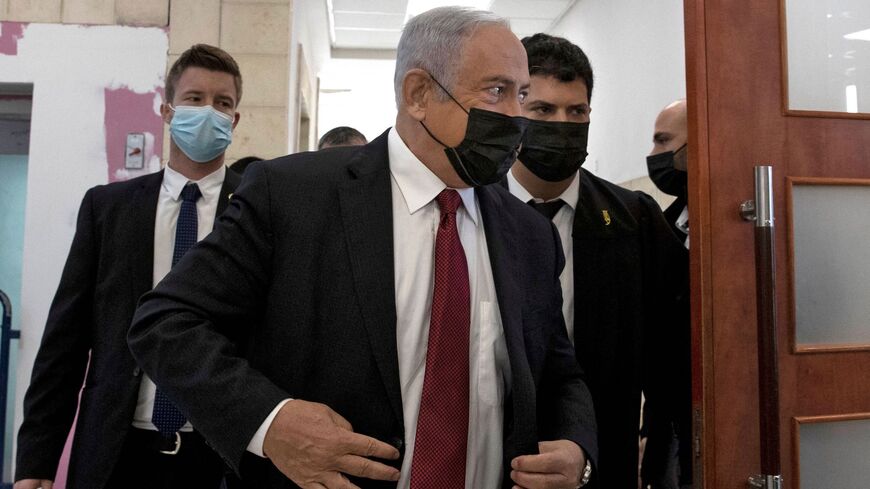 After two weeks of silence during which former Prime Minister Benjamin Netanyahu was hardly seen in the Knesset, he posted a video on social media Jan. 24. In it, he announced that he will remain to lead the Likud in order to make his way back to leading the state and put an end to the succession battle that had erupted within the party, following the revelation that he was considering a plea bargain in his graft trial.

Netanyahu refuted reports in the press, saying that he won’t plead guilty to a a moral turpitude charge. Accepting such a plea bargain would mean that Netanyahu won’t be able to run for office for seven years. At his age, it would probably mean the end of his political career. That being said, Netanyahu did not deny that discussions are ongoing for a plea bargain. He also thanked his fans for their tremendous support and promised to keep fighting for them.

Netanyahu’s numerous followers had waited for this announcement ever since the plea bargain news broke. They keep standing by their leader even as he is pushed deeper and deeper into the opposition and his political and legal future is uncertain. Thousands of them contributed to a crowdfunding campaign created by right-wing media personality Yinon Magal, a Netanyahu supporter, to help finance his legal defense. Almost four million shekels have been gathered so far, and people keep offering money.

Over the last two years, the more Netanyahu became embroiled in legal trouble, the more support poured in from a million Likud voters who followed him through four elections. According to the polls, these voters are still loyal to him. Netanyahu was strengthened in the last elections and still heads Israel’s largest party.

The Israeli public continues to be divided. Netanyahu’s fans believe that his charges were designed to remove him from the Prime Ministry by leftist conspiracy groups and the elites of the legal system. His enemies, on the other hand, maintain that he is poisonous and corrupt.

Higher-ups in the Likud — some of whom have been fighting to succeed him — hurried yesterday to publish videos and warm words of support for Netanyahu. They did so not out of any great love for Netanyahu, but because they knew that if they oppose him, they will suffer politically in the Likud and be viewed as subversives trying to oust a beloved leader.

Still, today’s Likud does not look like the party of two weeks ago, before the news broke of a possible plea bargain. It is now clear to everyone, including Netanyahu’s fans, that Netanyahu could actually accept a deal that would keep him out of prison but remove from the political arena.

Netanyahu’s video won’t make people forget the plea bargain talk. And even if Netanyahu maintains that he will fight the charges to the end, his opponents will remain skeptical. The news is surely effecting the senior Likud members, who must be coming around to the idea that the Netanyahu era could end any moment.

Will this loss of confidence undermine Netanyahu’s power in the Likud? It doesn’t look like it, because Netanyahu’s control over his party is based on a large public group of followers. So long as he remains popular, he wields as much control as he wants.

Netanyahu posted his video shortly after reports emerged that Attorney General Avichai Mandelblit is backing away from a deal. These reports claimed that with just one week left to the end of his term, Mandelblit has decided to leave this hot potato to his replacement. The prevailing assessment in the political system is that another plea bargain will arise within months after a new attorney general is appointed.

The plea bargain news revealed not only fears within the Likud leadership and the opposition, but also the weakness of a polarized coalition. If Netanyahu is replaced by another Likud member, the balance of power in the Knesset could change as the glue holding the coalition together dissolves.

One example of these concerns was rumors of former Minister Yisrael Katz taking up Likud leadership and forming a new coalition with right-wing members of the current coalition like Justice Minister Gideon Saar. Minister Eli Avidar hinted as much in a video he posted yesterday. Speaking about the extension of emergency coronavirus regulations, Avidar warned, “We all know that certain ministers hold super-secret dialogues with candidates for heading the Likud, ensuring the dismantling of the coalition and leading to defectors. We must not give them time to realize their plans.”

Meanwhile, Prime Minister Naftali Bennett and Foreign Affairs Minister Yair Lapid try not to talk much about Netanyahu, but even they are surely disturbed by the possibility that Netanyahu's retirement from politics could pulverize their coalition. It seems likely they rushed to approve the inquiry in order to head off such a bargain. Still, considering Netanyahu’s relationship with his voters, it doesn’t seem likely that an inquiry will change anything.