If former Prime Minister Benjamin Netanyahu agrees to a plea bargain that would include a moral turpitude conviction, he would be banned from Israeli politics for seven years. 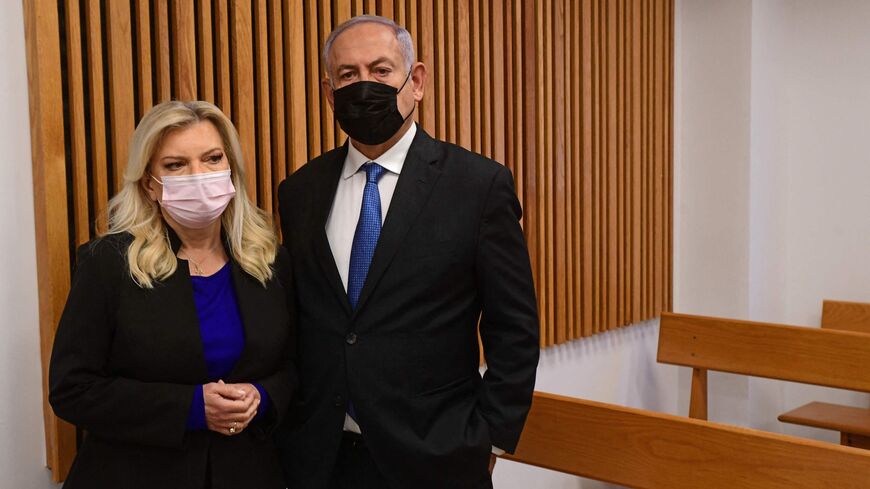 Former Israeli Prime Minister Benjamin Netanyahu (R) and his wife Sarah stand in the Tel Aviv Magistrate's Court on Jan. 10, 2022, ahead of a preliminary hearing in their defamation lawsuit against former Prime Minister Ehud Olmert, who called them "mentally ill" in interviews. - AVSHALOM SASSONI/AFP via Getty Images

Has former Prime Minister Benjamin Netanyahu resigned himself to the end of his political career? Do the secret contacts he has been conducting with the prosecution on a plea deal that would see him admitting to criminal charges of fraud and breach of trust signal the end of the Netanyahu era?

As these lines are written, there is no clear answer to these questions. Netanyahu is zig-zagging and deliberating while the prosecution is hesitant to believe the sincerity of his intentions. Netanyahu, his wife Sara and two sons Yair and Avner spent hours on Jan. 16 at the home of his lead attorney Boaz Ben-Tzur in the suburban Tel Aviv town of Ramat Gan discussing the pros and cons of a deal that would shut down his corruption trial with an admission to fraud and breach of trust in return for which the prosecution would drop the bribery charge.

At the end of the session, during which cameras filmed the family walking back and forth inside the house through the uncurtained windows, word was leaked to reporters that Netanyahu had given a “green light” for the prosecution’s demand — that he would accept a conviction of “moral turpitude” for his crimes, legally preventing him from holding or running for office for seven years. Reports on the outcome of the meeting varied, with some confirming Netanyahu’s serious intentions while others expressed doubt.

This behavior is classic Netanyahu. He is trying to treat the prosecution how he did over the years US Presidents Bill Clinton and Barack Obama, Secretary of State Hillary Clinton, Palestinian President Mahmoud Abbas and quite a few other unfortunate figures with whom he dealt. However, unlike those previous dealings, this time Netanyahu is no longer prime minister. As a defendant in a criminal trial, he is not setting the pace of developments but being dragged along. He risks the final window of opportunity slamming in his face and leading him to a barred cell.

Netanyahu burst into the Israeli political arena in 1988. His meteoric rise was the most significant in Israeli history. Just eight years after ending his term as Israel’s ambassador to the UN and returning to Israel to join the Likud, he became prime minister. He since served in the post a total of 15 years, an Israeli record unlikely to ever be broken, disrupting the state, its policies, public discourse and social cohesion like a hurricane and leaving substantial wreckage behind.

The question is whether he truly intends to leave a different legacy or if talk of a plea deal is a smokescreen to help him carry out his next trick. The second possibility seems the most likely, if history is anything to go by.

Nonetheless, Netanyahu’s dilemma is real. Until seven months ago, he was the most powerful person in the state and among the most powerful in the world. The state and friendly billionaires footed the bill for all his expenses and alleged personal and family extravagances. But the heady fumes of power seemed to have clouded his judgment. He and his family had grown accustomed to having drivers, guards and servants, conducting themselves like kings in a corrupt monarchy.

Then, almost overnight, they found themselves paupers. The taxpayers fund one office and one car for former prime ministers, and Netanyahu’s wife and sons are now forced to find other means of transportation. Their lifestyle has changed dramatically. They can no longer try to charge the upkeep of their private Caesarea villa to the state coffers. What is more, Netanyahu’s trial costs are estimated in the millions of shekels. So why not take up the state’s offer? A big world awaits outside, full of the billionaires Netanyahu loves, with prospects of hefty lecture fees and book deals and all the trappings of the good life to which he and the family have grown accustomed.

Netanyahu, as was predictable, is entertaining both the idea of a plea bargain and the start of a new chapter while preserving his power and influence and the faint hope of returning to office at some point. But he will have to choose.

Netanyahu’s fans, who are familiar with the family’s legendary tightfistedness, launched a public fundraising campaign this week in a bid to allow him to continue his trial rather than giving in to the prosecution, which they have persistently tarred in demonic terms. They are apparently willing to foot the bill, telling him that money is no object.

Horrendous as it may sound, this consideration could well sway the family’s decision. In just three days, the crowd funding has raised close to 3 million shekels ($270,000) and counting. But the flip side is the cautionary tale of former President Moshe Katzav, who was accused of sex crimes and rejected a generous plea deal offered in 2008 by then-Attorney General Menachem Mazuz, and found himself convicted of the rape charges in the original indictment. He served five years of his seven-year sentence. It’s about “admitting to something you didn’t do in order to prevent a drawn-out saga,” former culture minister and close Netanyahu ally Miri Regev said in an interview Jan. 17. “You remember what happened to Katzav.”

The prospects are growing dim of a deal being signed before Attorney General Avichai Mandelblit ends his term on Jan. 31. As his successor (as yet unnamed) may feel less pressure to end this legal saga, not being the one who submitted the charges to begin with, Netanyahu could presumably continue to negotiate and draw out the proceedings as is his custom.

That being said, the current time pressure dictated by Mandeblit’s departure from office as he works to clear his desk and ensure Netanyahu’s exit from politics could produce the best deal Netanyahu is likely to get. The more Netanyahu drags his feet, make decision and then reverse them, the deeper he will dig himself into the hole to which his maneuverings and machinations have brought him. Classic Netanyahu.