Despite declarations made in the past by former Prime Minister Benjamin Netanyahu against a plea bargain, it seems that such a deal might now be on the table. 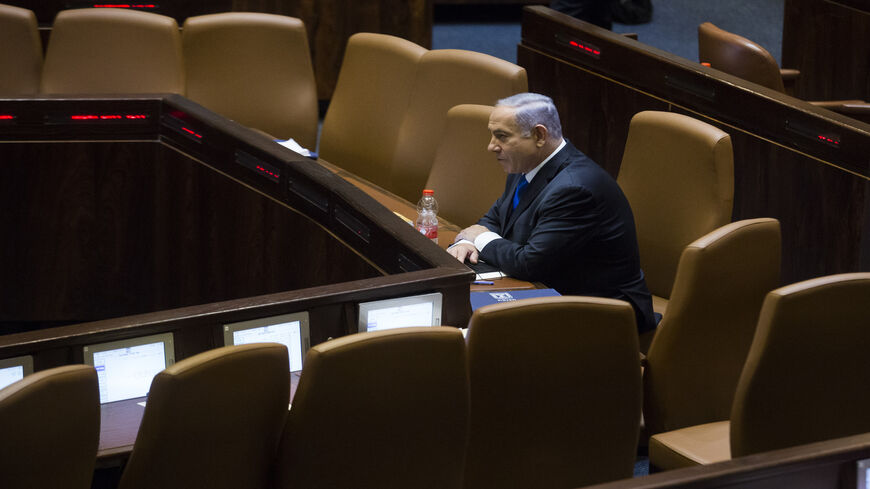 Any film script based on this real-life drama would be categorized as science fiction or fantasy. Two weeks to the end of his six-year term, Attorney General Avichai Mandelblit and former Prime Minister Benjamin Netanyahu are facing off for a final duel. Israelis of all stripes are watching, some with trepidation, others with hope. Secret negotiations first revealed this week would end Netanyahu’s trial on charges of bribery, fraud and breach of trust with a plea bargain.

Israelis are once again torn between those eager to be rid of Netanyahu at all cost, those who want him convicted by a court of law and those who believe the legal system is persecuting their revered leader. The ball is in Netanyahu’s court, or more precisely in the hands of the family board members: Netanyahu, his wife Sara Netanyahu and their son, Yair.

The deadline is near — Jan. 31, when Mandelblit’s term expires. His replacement, who is yet to be chosen, will not be bound by any previous understandings. He or she will not rush to wrap up pending cases. Their reputation will not depend on the outcome of this long-running legal battle. Netanyahu knows that it is now or never. He knows that without a plea deal, chances are he will have to trade in his tailor-made suits for an orange jumpsuit. For now, he seems to be at a loss.

None of these scenarios panned out. The trial got underway in May 2020 and so far, the key state’s witness has given his testimony. Opinions are divided on the prospects of Netanyahu’s conviction of bribery, but a guilty verdict on the charges of illegally accepting gifts from wealthy businesspeople is all but certain, and with it a possible jail term and a finding of “moral turpitude” barring him from public life for seven years. Netanyahu has all along denied any plans to seek a shortcut with the prosecution, which he regards as even worse than the devil, and declared his intention to fight and clear his name.

The two words holding up a decision by the Netanyahus are “moral turpitude,” a label that under Israeli law applies to various crimes and precludes a run for political office for seven years. The clock starts ticking once the jail term is served. Shas party Chair Aryeh Deri, who served jail time for bribery in the 1990s, was forced to wait seven years on the political bench until he could run for the Knesset once again and return to government.

Netanyahu is 72. If convicted of the charges against him, he will likely appeal. Unless his sentence is overturned on appeal, he could find himself behind bars at the age of 75-76. Jail time plus seven years on the bench will put him back on the field in his 80s. True, his father professor Benzion Netanyahu lived to 103, but Netanyahu is not counting on it. He wants to wrap up the case. According to reports, he might be willing to admit to breach of trust on some of the charges in return for the prosecution dropping the bribery charge and dismissing charges stemming from an alleged deal he tried to make with a major publisher. Anything to avoid prison and to make the “moral turpitude” clause go away.

“Next thing you know, he’ll be asking the attorney general for compensation,” a senior source in Israel’s legal system told Al-Monitor on condition of anonymity. “He actually wants to admit to relatively minor offenses and return to politics immediately, or almost immediately. We do not believe the attorney general will go for such a deal,” he added. The “moral turpitude” label is not the only hitch in the negotiations. The other problem is that almost nobody believes a word Netanyahu says.

In clearing up his remaining cases, Mandelblit appears determined to distance Netanyahu from politics for good. If Netanyahu somehow evades the “moral turpitude” clause, can some other constellation be found to keep him away from political office? A public promise by Netanyahu to steer clear of politics is worthless — in this world and the next. Although the moral turpitude clause would preclude a run for office, he could convince the chair of the Central Elections Committee, usually a Supreme Court justice, to make an exception in his case. Netanyahu is a wizard at convincing people of any and all claims. Is anyone willing to bet on such an outcome?

Netanyahu’s dilemma is existential in all respects — politically, personally, publicly. His magic has waned over the past two years as he plunged Israel into four consecutive election cycles. His machinations failed. He found himself isolated in the official Balfour Street residence, making one mistake after another. In the first elections round, in September 2019, he bolstered the Arab Joint List to curry favor with its voters; in the fourth election, in March 2021, he maneuvered a split in the Joint List, leading to an independent run by the Islamist Ra’am party, which would eventually spell his downfall in June 2021. He betrayed his allies — Gideon Saar, Naftali Bennett, Benny Gantz and anyone else he thought would get in his way. They are now in government. He is not. He is paying the price for believing in his own immortality.

On the one hand, Netanyahu, so it seems, is sick of the whole saga, and his family is, too. The generous public coffers are no longer footing the bills for any of the family’s quirks. Mrs. Netanyahu no longer has a driver or a car at the taxpayers’ expense, no aides to do her bidding, no title. Anyone who knows the family realizes the horror with which it views the loss of all these assets. The current government, led by Bennett and Foreign Minister Yair Lapid, could limp along for another two-three years despite its innate frailty. Would Netanyahu not be better off calling it quits, limiting the damage and taking up a lucrative offer by billionaire American tycoon Larry Ellison? If that were to happen, the family would likely relocate to the United States or some other convenient spot, from where the father would continue to preach and stir the Israeli political cauldron. Not ideal, but better than Maasiyahu prison.

He has two weeks to decide. Knowing Netanyahu, he will wait until the last minute and then try to put it off some more. But this time, he is bound to fail. Stay tuned.