Prime Minister Benjamin Netanyahu can be happy with his week: His rival Prime Minister Naftali Bennett is deep in coalition trouble, and his own trial offers him some small legal victories. 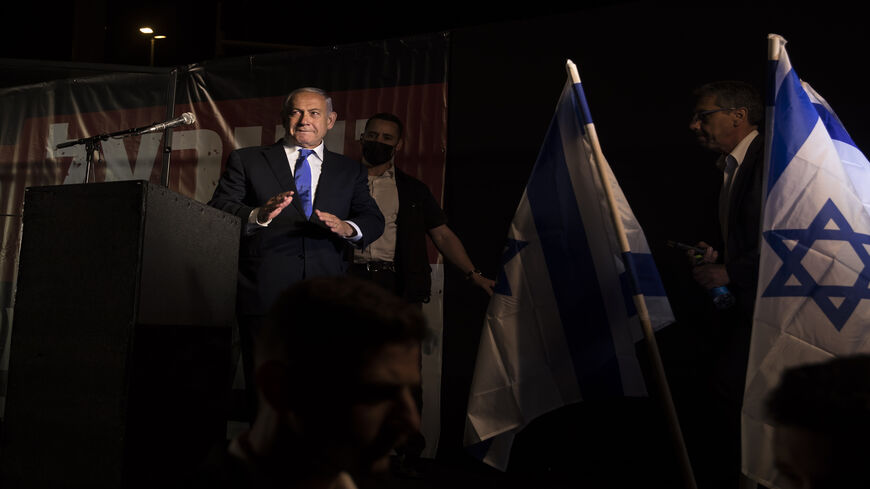 Former Prime Minister Benjamin Netanyahu, under trial on charges of bribery, fraud and breach of trust, appeared last week at Jerusalem District Court for the cross examination of the state’s key witness against him — Shlomo Filber.

Since his trial began in May 2020, Netanyahu has rarely appeared in court, but once Filber took the stand, he has made it a point to be present on occasion for the testimony of his former close aide, which is crucial to the state’s case. The state alleges that Netanyahu appointed Filber in June 2015 to head the Ministry of Communications so that Netanyahu would approve regulatory benefits for Shaul Elovitch, owner of the Bezeq telecommunications group and Walla news site, in return for favorable coverage of himself and his wife.

On May 11, Netanyahu sat in the small courtroom staring at Filber just meters away. Filber has made it clear in his testimony so far that he continues to hold Netanyahu in high esteem as one of Israel’s greatest leaders. That did not prevent him from turning a state’s witness and describing to police and securities regulators how Netanyahu instructed him to favor the media tycoon, anchoring the state’s contention that the former prime minister allegedly did so in order to ensure flattering coverage by the popular Walla site, in essence accepting a bribe from Elovitch.

According to Filber, Netanyahu gave his allegedly criminal instruction at a meeting during Filber’s first week in office in June 2015. But last week, in a glancing blow to the prosecution, the defense team showed that no such meeting took place that week in June 2015 — based on phone tracking data and scheduling entries. The dramatic finding undoubtedly dented the nub of the state’s case and has prompted wild rejoicing by the pro-Netanyahu camp.

On May 15, the state petitioned the court to amend its indictment in order to change the date of that alleged crucial meeting. Following that request, Netanyahu turned to reporters, saying, “That is what is called, ‘In your face.’” He was suggesting that the prosecution had the nerve attempting to change the facts, so that they fit the case against him, after being caught out in a lie.

The three judges will now have to decide which version to believe. Filber, under great pressure from his former friends in Netanyahu’s camp, has appeared to contradict his own testimony at various points during the trial, but it is too soon to tell to what extent the date issue has hurt the state.

Many of Netanyahu’s fans and allies, who have in the past argued that the case against Netanyahu was about to collapse, are convinced that this latest development was the final nail in the state’s coffin. The prosecution’s apparent misstep has bolstered their contention that the criminal investigation of Netanyahu and his bribery indictment were all politically motivated and intended to remove him from power.

Reports have been claiming that the former prime minister operates a particularly well-oiled propaganda and fake news machine with which he tries to dictate the public agenda and embed narratives favorable to his case. Although his prospects in the court of law are unclear, Netanyahu, it seems, is certain he can win in the court of public opinion.

From a legal standpoint, and contrary to his supporters’ claims, the case against Netanyahu is far from collapse. The state can still persuade the judges that Netanyahu gave Filber the incriminating instruction to benefit Elovitch, just not on the previously alleged date. The state’s request to amend the indictment is hardly dramatic or unusual, and courts accept such petitions as a matter of routine.

Netanyahu and his defense team know they have scored points in court, but have hardly achieved a knockout. Netanyahu’s defense team is still believed to be of the opinion that he would be better off reaching a plea agreement with the state that avoids jail time. Secret contacts between Netanyahu and the state on a plea bargain, first revealed by this reporter in January, have stalled in recent months.

But Netanyahu’s legal drama has been sidelined in recent days by political and security issues. The fragile government coalition of his successor — Prime Minister Naftali Bennett — has lost its parliamentary majority. A wave of Palestinian terrorist attacks and Israeli counterterrorism raids in the West Bank are further undermining the government’s stability.

Bennett took a series of parliamentary and political steps to staunch the bleeding of his Yamina party after the resignation of his Knesset whip Idit Silman last month. Alternate Prime Minister and Foreign Minister Yair Lapid has talked the Islamist Arab Ra’am party out of quitting the coalition and bringing down the government. But all eight coalition parties realize that the current state of affairs cannot last. Netanyahu, who still leads all the polls despite being out of office for almost a year, is taking full advantage of this political weakness.

Netanyahu is trying to create the impression that he is just one step away from ridding himself of his legal woes and leveraging this victory to engineer a powerful comeback once the coalition collapses and elections are held. Claims that his trial was rigged will undoubtedly feature prominently in his electoral campaign, in the hopes that the Likud party supporters who abandoned him over his alleged corruption will rejoin the fold.

A race against time is underway in the public arena. Will the government collapse before Netanyahu breaks and resumes his plea bargain negotiations? Or will the government hang on somehow and see out this year, in which case Netanyahu’s attorneys will likely convince him to go for a deal given his murky political prospects?

Last week, the political race appeared to open up a lead over the legal one. The points scored by Netanyahu’s defense team favors the odds against a plea bargain, even as the coalition’s woes pile up. Bennett has not given up and is fighting back, but no bookie will give him strong odds of political survival through this year. Netanyahu is counting on this, although he has been counting on various similar scenarios for the past three years, none of which have panned out.