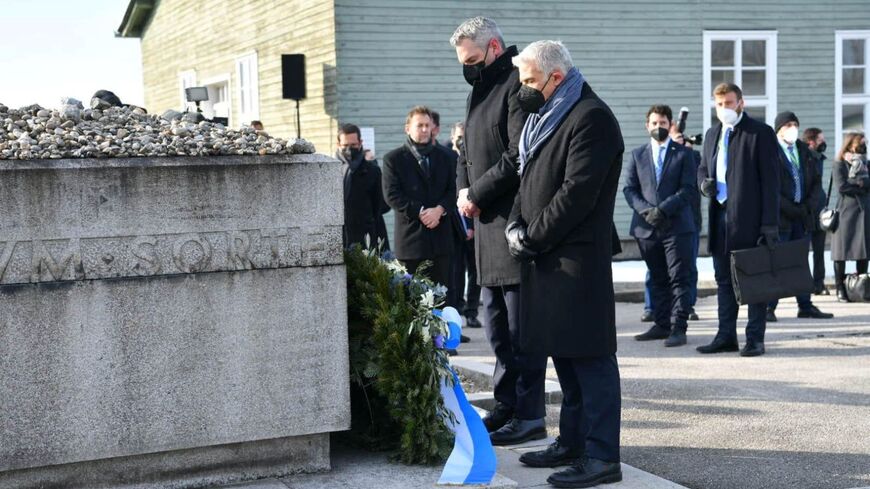 Israeli leaders marked International Holocaust Remembrance Day Jan. 27 with a series of events, several of them outside the country.

Speaking in Hebrew, and with great emotions, Levy noted that “here, in this historic building, the house of the German parliament, one can grasp — if only slightly — the ability of human beings to take advantage of democracy to defeat it. It is a place where humanity stretched the boundaries of evil — a place where the loss of values turned a democratic framework into racist and discriminatory tyranny.” At the end of his speech, with his voice choked by tears, Levy recited the Jewish traditional mourning prayer Kaddish, reading it out of a prayer book that belonged to a Jewish boy celebrating his bar mitzvah on Oct. 22, 1938, shortly before the Kristallnacht pogrom.

Foreign Minister Yair Lapid traveled this morning to Austria, where he visited the Mauthausen concentration camp where his grandfather died in April 1945. Addressing Austrian leadership, including Austrian Chancellor Karl Nehammer, Lapid recounted, “My grandfather was sent to Auschwitz, and after that, he was sent here, to Mauthausen. When he arrived here, he was no longer a dad, he was no longer fat, he was no longer a person. He was a number. The Nazis went to great lengths to number their prisoners. My grandfather, like everyone who came to Auschwitz, had a number tattooed on his arm.’’ Lapid ended his speech saying, “Grenpa Bela, a quiet man whose family nickname was “Bela the Wise”, sent me here today to say on his behalf, that the Jews have not surrendered. They’ve established a strong, free, and proud Jewish state, and they sent his grandson, to represent them here today.”

President Isaac Herzog did not travel abroad, but rather participated online at a Zoom-screened commemoration event organized by Paris-based UNESCO. This morning, UNESCO announced a partnership with Tiktok, for fighting Holocaust denial and distortion by redirecting people inquiring about it to a site set up together with the World Jewish Congress dedicated to the history of the Holocaust. Herzog commended UNESCO General Director Audrey Azoulay “for her strong leadership and her efforts to strengthen and focus UNESCO in the areas which motivated its establishment.”

With the foreign minister in Austria, Director General of the Foreign Ministry Alon Ushpiz represented him at the ceremony that took place in Israel, at the Yad Vashem World Holocaust Remembrance Center in Jerusalem. Ushpiz told the participants of the ceremony that Israel is currently seeking the presidency of the International Holocaust Remembrance Alliance (IHRA) for the year 2025. The IHRA is responsible for the nonbinding working definition of anti-Semitism used now by many countries and organizations and promoted by Israel. In 2025, this forum will mark 25 years to its establishment, and the international community will mark 80 years to the end of World War II.

Ushpiz also mentioned the Israel-sponsored resolution adopted Jan. 21 at the UN general Assembly against Holocaust denial. 114 member states supported the resolution, which was based on the IHRA definition of anti-Semitism, including “the targeting of the state of Israel, conceived as a Jewish collectivity.”

Israel’s deep involvement in the global events of Jan. 27 is rather new, though it was Israeli diplomats who originally pushed for the UN to mark it officially. The date that was chosen is the day Auschwitz death camp was liberated. Israel’s Ambassador to Rwanda Roni Adam served in 2004 as director of the Department for International Organizations at the Israel Ministry of Foreign Affairs. He was the one who proposed at the time the initiation of a special session at the United Nations’ General Assembly to commemorate the Holocaust. Following this campaign, the UN designated a special remembrance day in 2005.

In the years before that, but also after the UN resolution, Israel focused on marking the Holocaust according to the Hebrew calendar. The official date in Israel for remembering the Holocaust and the bravery of the victims is the day the Warsaw Ghetto munity of the imprisoned Jews against the Nazis started. This is the date commemorated in schools and official ceremonies. It is just in recent years that Israeli leadership engages deeper and with much more visibility also on Jan. 27.

As the son of a Holocaust survivor, Lapid is especially engaged in campaigning against Holocaust denial, distortion or trivialization. Since taking office, he has not shied away from confronting the Polish government on a law limiting compensations for Holocaust survivors, and did not back away even when the confrontation turned into a diplomatic crisis.