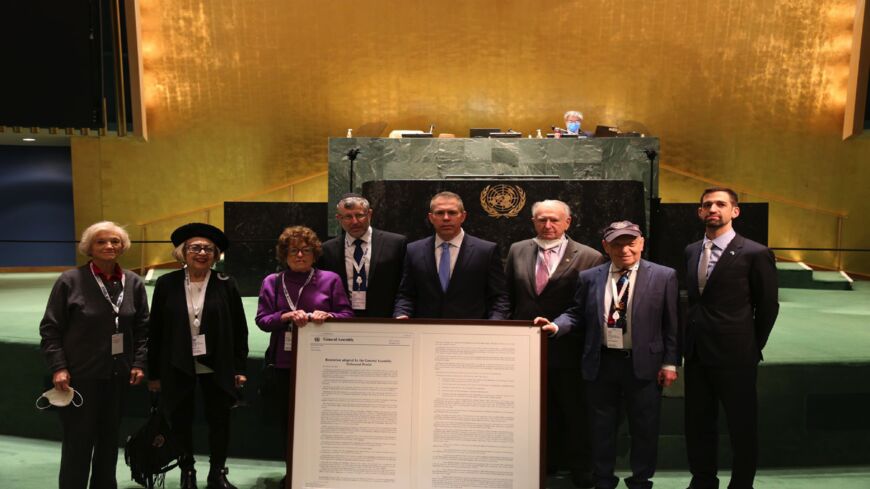 Israel's Envoy to the UN Gilad Erdan together with Holocaust survivors, after the UN General Assembly adopted an Israel-sponsored resolution against Holocaust denial, New York, Jan. 20, 2022. - Israel's delegation to the UN

The UN General Assembly adopted Jan. 20 a resolution condemning Holocaust denial. It was the second time only since the establishment of the State of Israel that a proposal brought before the international forum by the Israeli diplomatic mission managed to pass. An Israeli-sponsored resolution on agricultural technologies for development was adopted by the UN General Assembly in 2019. One hundred and fourteen countries voted in favor of Resolution A/76/L30. Iran expressed its objection, but having failed to pay its UN membership dues, its delegation was banned from certain rights and its opposition voice was not counted in the vote. Thus, the resolution was approved by consensus.

The resolution was adopted on the same date as the 1942 Wannsee Conference, which had laid the groundwork for the systematic murder of Jews throughout Europe. Sponsored jointly by Israel and Germany, it was approved in the presence of a group of Holocaust survivors, invited by the Israeli UN mission for the occasion. Also invited by the Israeli mission was Pfizer CEO Albert Bourla, whose parents survived the Holocaust. A day before the resolution, Bourla donated the Genesis Foundation prize he had received to the Jewish Community of Thessaloniki, Greece, in memory of his parents.

Introducing the resolution, Israel’s envoy to the UN Gilad Erdan called the resolution his “most important initiative” as ambassador “not only because I represent a Jewish state, not only because I am a Jew, but also because I am the grandson of Holocaust survivors.” Erdan then warned that the world now lives “in an era in which fiction is now becoming fact, and the Holocaust is becoming a distant memory. Holocaust denial has spread like a cancer. It has spread under our watch. It has spread because people have chosen to be irresponsible and to avoid accountability.”

The resolution text expresses concern over “the growing prevalence of Holocaust denial or distortion through the use of information and communications technologies.” It further urges member states to “reject without any reservation any denial or distortion of the Holocaust as a historical event, either in full or in part, or any activities to this end.”

The resolution commends countries that have “actively engaged in preserving those sites that served as Nazi death camps, concentration camps, forced labor camps, killing sites and prisons during the Holocaust, as well as similar places operated by Nazi-allied regimes, their accomplices or auxiliaries.”

It also commends the UN Education, Science and Culture Organization (UNESCO) for its work in teaching the Holocaust and its actions against Holocaust denial and Holocaust distortion, including training of teachers, developing policy guidelines for education ministries around the world, and more. While Israel is not a member of UNESCO, one of the agency’s principal partners in this mission is the Jerusalem-based Yad Vashem World Holocaust Remembrance Center. UNESCO Director-General Audrey Azoulay expressed satisfaction over the passing of the resolution and told Al-Monitor that it is bound to push more countries into engaging with UNESCO on its Holocaust remembrance educational programs and guidelines.

Following the vote, Israel’s President Isaac Herzog tweeted, “47 years ago, my father Chaim Herzog, Israel's UN ambassador, ripped up an outrageous resolution equating Zionism with racism. Today, I am pleased to see the UN taking this step for historical truth. We must keep doing everything to fight the terrible scourge of Holocaust denial… I commend the UN General Assembly for adopting an important resolution against Holocaust denial and distortion, for the first time endorsing practical steps to combat this evil based on the IHRA definition of Holocaust denial.’’