2025 is an important time for Israel to assume the IHRA presidency as the world will mark 80 years since the liberation of the Auschwitz concentration camp. 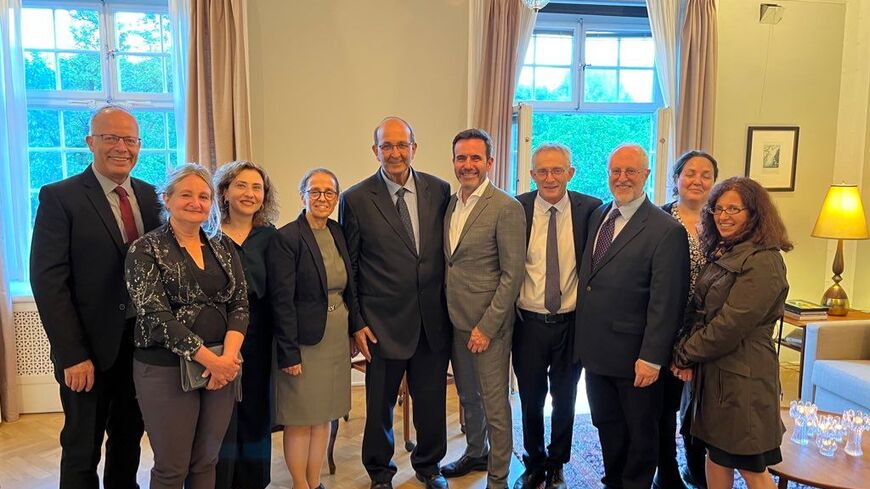 The Israeli delegation to the annual IHRA conference is pictured in Stockholm, Sweden, June 23 2022. - Israel's embassy in Sweden

Israel was elected today to preside the International Holocaust Remembrance Alliance (IHRA) for the year 2025. The election process took place at the IHRA’s annual plenary session, which is currently taking place in Stockholm, under Sweden’s current presidency.

The Foreign Ministry in Jerusalem and Yad Vashem World Holocaust Remembrance Center had jointly campaigned for the past few years, for Israel to serve as president precisely in 2025, as this year will mark 80 years since the liberation of the Auschwitz-Birkenau concentration camp and end of World War II, as well as the 25th anniversary of the IHRA’s establishment. Since his arrival to Stockholm last fall, this issue, as well as other forums related to Holocaust remembrance and teaching, had become a priority for Israel’s ambassador to Sweden Ziv Nevo Kulman.

The IHRA is an intergovernmental body aiming at placing political and social leaders’ support behind the need for Holocaust education, remembrance and research both nationally and internationally. The nonlegally binding definition proposed by the IHRA of antisemitism has been adopted over the past decade by a great number of countries, and is globally used for political, diplomatic and educational purposes. Israel’s Foreign Ministry campaigns for the definition to be adopted as widely as possible globally.

Yad Vashem Chairman Dani Dayan told Al-Monitor June 23, “The Holocaust is unique in that it is marked and remembered first and foremost not where it happened but across Israel. It is in Israel that the whole country stands still on Holocaust Remembrance Day, that sirens are sound, that cinemas close. So it is only appropriate that Israel will host the ceremonies of that year.”

Dayan explained that the Israeli presidency will be founded on three pillars: “The first pillar is sad but unavoidable. We must prepare the world for the post-survivors’ era. In other words, for times when we will no longer have with us direct witnesses and victims of what happened during the Holocaust. This means collecting more data and testimonies, and converting them into knowledge and educational tools so that we can spread the stories. The second pillar is battling Holocaust distortion. One such example is insisting not to put on the same pedestal as the Righteous Among the Nations [recognized for saving Jews while endangering themselves] also other people who deserve less or do not deserve that at all. The third pillar is obviously fighting antisemitism, in Europe, but also elsewhere. We have been working for instance quite a lot in recent years in Latin America.”

Ruth Dar, Foreign Ministry director of the department for combatting antisemitism and Holocaust remembrance, told Al-Monitor that when Israel made it known it would be seeking the 2025 presidency, no other country presented its own candidacy in competition. More so, at the meeting, more than half of the representatives asked to speak up, hailing Israel for its educational and research actions for Holocaust remembrance. “We received comprehensive endorsement from everyone, and the vote in our favor was unanimous. This is certainly not what Israel is used to in international organizations.”

Dar said that now that the decision is taken, Israel will start working with the leadership and staff of the IRHA, to prepare the agenda and program of the 2025 presidency.

She added, “Of course, there will be ceremonies. But what’s most important is education. We want to engage in long-term programs. And there are also issues that have received so far less attention globally, such as the Holocaust in North Africa — what happened to Jews in Maghreb countries. We want to tell that story as well. Then, there is the strategy that needs to be developed of living in a world without Holocaust survivors. Yad Vashem and also other Israeli institutions lead in archives, collection of data and preservation. This would be an important element in our programs for the 2025 presidency.”

The event in Stockholm takes place on the backdrop of amelioration of Israeli-Swedish diplomatic relations, which have deteriorated significantly in past years over the Palestinian issue. Sweden’s Foreign Minister Ann Linde visited Israel in October 2021 in a sign of rehabilitating ties. The issue of battling antisemitism and remembrance of the Holocaust has become a major topic of cooperation between Jerusalem and Stockholm, with Ambassador Ziv Nevo Kulman advancing several initiatives in that direction.

Dar noted that Holocaust remembrance and fighting antisemitism are inherited elements in the list of priorities of every Israeli diplomat.