Combating antisemitism, a top priority for Israeli diplomats in Europe

The two-day bilateral dialogue with France offered Israeli diplomats another opportunity to advance the creation of an international coalition on combating antisemitism. 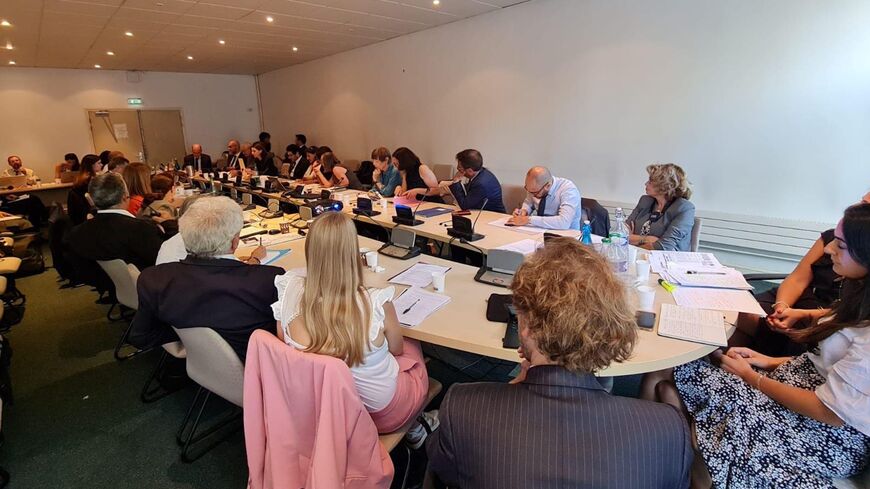 Paris — A delegation headed by Israeli diplomats met this week with French authorities in the framework of the annual bilateral dialogue for combating antisemitism. The dialogue was suspended during the last two years of the coronavirus pandemic. This week, it was renewed in its largest-ever composition.

About 50 people participated at the Sept. 12-13 conference, including senior officials of the French foreign, justice, interior and culture ministries; their Israeli counterparts; Israeli and Jewish researchers; members of the civil society and representatives of the French Jewish community, including a senior official of the CRIF (the umbrella organization for French Jewry).

Battling antisemitism has been an important topic for Israeli diplomats for many years. Still, since Yair Lapid was nominated foreign minister in the summer of 2021, and more so since Lapid started serving as prime minister in the transition period until the November elections, the issue has been high on the diplomatic priority list. Minister plenipotentiary at the Israeli Embassy in France Ronit Ben Dor explains that last year, combatting antisemitism was formally recognized as one of the top 10 priorities of the Israeli Foreign Ministry.

As the son of a Holocaust survivor, Lapid has been fighting for years, and in different arenas, against Holocaust negation and against the phenomenon of antisemitism. In fact, on June 2021, shortly after his nomination as foreign minister, he generated a diplomatic crisis with Warsaw over its decision to put in place a law limiting restitution rights of Jewish victims of the Holocaust. Lapid summoned Polish Ambassador Marek Magierowski to express its disapproval over the law approved by the parliament in Warsaw, publicly condemning the Polish government.

The political dialogue in Paris this week was conducted in a whole different tone. Contrary to Poland, Israel views French authorities as engaged partners in battling antisemitism.

Ruth Cohen Dar is the director of the Foreign Ministry Department for Combatting Antisemitism and Holocaust Remembrance. She tells Al-Monitor that in the past two years, they have been working quite a lot on strengthening the status of the IHRA (the International Holocaust Remembrance Alliance), since it’s the only body in the world dedicated to this issue that is not political but expert-based. Cohen Dar points out that many countries have already adopted the IHRA working definition of antisemitism. "It is important to get as many countries on board because using the same definition creates a common language, a common denominator. When we speak about antisemitism, all of us, members of the alliance, know what we are talking about."

One of the initiatives Cohen Dar and the Israeli Foreign Ministry promoted at the Paris conference was a joint project for monitoring antisemitism on social networks. Israel has gained significant experience on this topic, as the ministry is managing an efficient monitoring system to track antisemitic social media posts. It would now like to exchange data and good practices with France and other European countries.

Shuli Davidovich heads the Foreign Ministry’s Bureau for World Jewish Affairs and World Religions. She tells Al-Monitor that one of the missions of the delegation in Paris this week is to advance the creation of a global coalition against antisemitism.

“We are not necessarily speaking about a structured coalition with defined criteria and a legal framework. A rigid structure would actually be more difficult to put in place, more time-consuming. We would rather unite all interested partners in a looser coalition committed to the same values of battling antisemitism in all its forms,” she says, adding that several countries have already expressed interest in this type of collaboration with Israel.

Cohen Dar points out that Israel has initiated already several multilateral cooperations on battling antisemitism, so creating an international alliance would make sense.

"We are currently preparing a big conference of prosecutors from around Europe, including representatives from France. We believe that training is a key element. We must be productive on the ground where it really touches people. At the end of the day, it’s the lone police officer who arrives at the street corner where an antisemitic incident occurred, who makes the decision what to include in his report; it’s the prosecutor deciding which clause in the law the incident would be charged under, and it’s the judge ruling at the court. That is why all parts of the chain must be aware, take into consideration antisemitic elements," she explains.

Ben Dor hails the excellent spirit of cooperation that prevailed during the conference this week, a result of hard work on the part of past and present French governments, as well as many meetings she and her colleagues maintained with French counterparts. She says that the conference was frank and open. No issue was considered taboo or sidelined by the French hosts.

French Ambassador Delphine Borione, who is in charge of human rights and battling antisemitism, headed the French delegation to the conference. "We had very interesting debates on themes related to antisemitism. On Monday, we took stock of all ongoing efforts in battling antisemitism, both on the national and the multilateral-European levels. Then on Tuesday, we looked into our respective policies on education, research, remembrance. We are also looking into the issue of restitution of Jewish property stolen during the war by the Nazis,’’ she explained.