The campaign to equate anti-Zionism with anti-Semitism

Although some acts of anti-Semitism are perpetrated under the guise of anti-Zionism, anti-Zionists, a group that includes some Israelis, are not anti-Semitic despite a definition of anti-Semitism being promoted by the International Alliance for Holocaust Remembrance and Israeli governments under Benjamin Netanyahu. 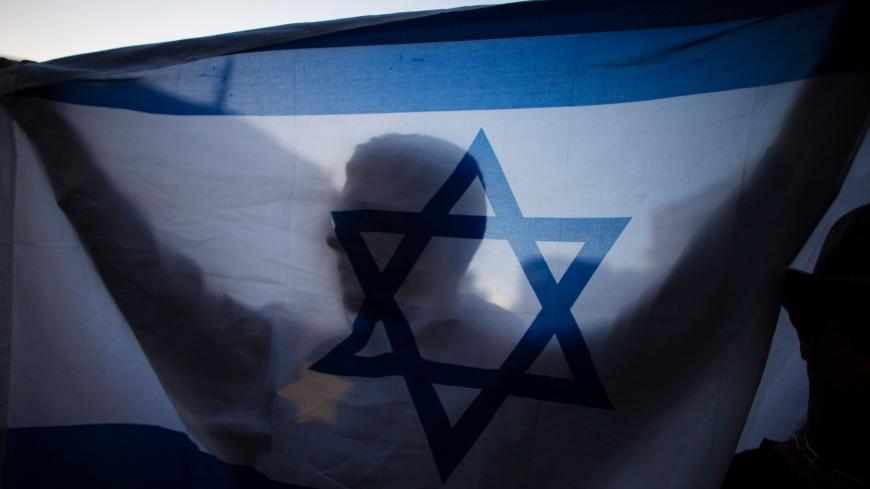 An Israeli holds a flag in Jerusalem during a protest in support of Israel's offensive in the Gaza Strip, July 14, 2014. - REUTERS/Ronen Zvulun

The Israeli government’s campaign equating anti-Zionism with anti-Semitism has achieved considerable success. In May 2016, the International Alliance for Holocaust Remembrance (IHRA) decided to add “targeting of the state of Israel, conceived as a Jewish collectivity” to its definition of anti-Semitism.

French President Emmanuel Macron made similar comments in 2017 and again on Feb. 21 of this year during a meeting with the leadership of CRIF (Conseil Représentatif des Institutions Juives de France), the umbrella organization of the French Jewish community, as reported in Al-Monitor by Rina Bassist. Macron reiterated the identification of anti-Zionism with modern-day anti-Semitism and pledged that his government would define anti-Zionism as a form of anti-Semitism. Meanwhile, Jeremy Corbin, leader of the Labor Party in the United Kingdom, came in for sharp criticism when his party initially refused to adopt the IHRA's definition, criticism that eventually led to a change in Labor’s position and adoption of the definition in September 2018.

Israel wants anyone seeking its friendship to identify anti-Zionism with anti-Semitism. I am not sure, however, that this is the right battle for Israel to wage, and I have a hard time understanding how this formula benefits the country. The Zionist idea envisioned all the Jews of the world gathering in Israel, but not everyone who rejects this idea is an anti-Semite.

In historical terms, the determination equating anti-Zionism and anti-Semitism is wrong. Anti-Semitism was the driving force for the creation of the Zionist movement in the second half of the 19th century by European Jews who felt they were being stifled, driven out of various professions or relegated to quotas in other fields, put on trial for crimes they did not commit and subjected to vitriol by the political right and left. The anti-Semites of the 19th century were not (necessarily) enemies of Zionism, and to some extent, they even found a common denominator with the new movement: They wanted Europe cleansed of Jews, while Zionism urged Jews to leave Europe. Thus, the haters and the hated cooperated on occasion.

The most prominent example of this kind of cooperation in modern times is the strange alliance between Israel’s political right and Christian evangelists around the world who seek to ensure that at the end of time, all the Jews will convert to Christianity or be annihilated. For the evangelists, the Jews serve as harbingers of the Messiah’s coming on a donkey. According to evangelical doctrine, to ensure the Second Coming of Christ, all the Jews must live in an undivided Land of Israel. For now, they are supporters of Israel and are viewed as bigger “Israel lovers” than many Diaspora Jews, keeping their vision of the end of time in the vault.

Manifestations of open anti-Semitism declined after the Holocaust and the creation of the State of Israel in 1948, as did blatant opposition to the establishment of a Jewish state, with one exception. The Islamic states, especially the Arab ones, took up the banner of hostility toward Israel and turned the notorious anti-Semitic “Protocols of the Elders of Zion” into a sort of second Quran. Their hatred of Israel was accompanied by hatred of Jews, but one cannot say that the Arabs' anti-Israel sentiment was a new cover for anti-Semitism. On the contrary, opposition to the Jewish state gave birth to manifestations of anti-Semitism in the Arab Semitic world.

There is ongoing tension between the struggle against anti-Semitism and the yearning for an ingathering of Jews under one roof as clearly manifested in comments by Prime Minister Benjamin Netanyahu in Paris after the January 2015 terror attack on a Jewish supermarket. Netanyahu, in almost spontaneous fashion, trotted out the classic Zionist response and urged French Jews to immigrate to Israel in light of the attacks against them. The French government saw this as a slap in the face. Prime Minister Manuel Valls responded that without its Jews, France would not be France. Valls saw anti-Semitism as a racist phenomenon that should be erased from French soil and believed that its mitigation lay in educating the French, not in mass Jewish migration to Israel.

Millions of Israelis hold views locating them on the spectrum between non-Zionists and anti-Zionists. Most Palestinians living in Israel, or almost all of them, regard Zionism as a movement that drove their relatives from their homes and demanded Jews' priority over them. Most if not all accept the existence of the state and fulfill their civic duties, and the majority are even proud of their country and admit its advantages over neighboring states. They also, however, regard the very idea of Zionism as the cause of their deprivation and have a hard time understanding how Jews dare declare, “The Bible is our mandate to the Land,” as David Ben-Gurion famously told the Peel Commission in January 1937, and why we had to choose Palestine of all places when fleeing European anti-Semitism.

Many ultra-Orthodox Jews also oppose Zionism. They view it as a challenge to the religious concept that calls for waiting for the Messiah rather than taking the liberty of jumping the gun and establishing a Jewish state. Some among them live in Israel and boycott everything to do with the state — from the time zone on their clocks to government-issued identification cards to tax payments. Some simply express their displeasure by refusing to stand at attention during the annual sounding of sirens throughout Israel to commemorate the victims of the Holocaust and the fallen of Israel’s wars. Others refuse to serve as government ministers, even though their political parties are members of the ruling coalition, so as not to bear responsibility for the sins of the secular state.

There are radical anti-Zionists among this group as well as others who repress their anti-Zionism and when asked whether they are anti-Zionists always respond, “We pray ‘Next year in Jerusalem,” invoking the other name of Zion. They are convinced that this response is the most crushing answer to the troublesome question.

Then there is a minority of secular Israeli Jews who are not Zionists and proud of it. They range from the “Canaanites,” who in 1939 called for the integration of Jews into the region and handed out flyers opposing Zionism, to the Hebrew communists and others. All these groups are far from being anti-Semites, each opposing Zionism for reasons of its own.

One cannot ignore the link between anti-Semitism and anti-Zionism. Sometimes, anti-Zionism is, indeed, a guise for anti-Semitism, but we are not doing anyone any favors by insisting on equating the two terms. They are partially congruent, but not identical. It would be a mistake to enshrine this in law and a mistake to consider it some sort of Israeli achievement.