While the roots of anti-Semitism in Europe are deep, anti-Israel attitudes in the Muslim world can be changed with a solution to the Israeli-Palestinian conflict. 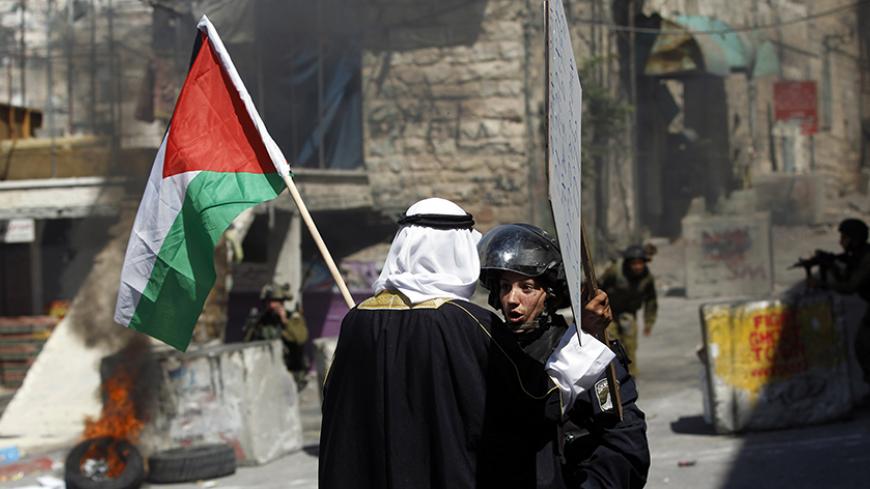 A Palestinian man holding a Palestinian national flag argues with an Israeli policewoman during a protest against the Israeli offensive in Gaza, in the West Bank city of Hebron, Aug. 22, 2014. - REUTERS/Mohamad Torokman

Following publication of my first article in our series on anti-Semitism, in which I argued that protests against Israel are often interpreted as an expression of anti-Semitism, a reader reminded me that the Holocaust took place before the establishment of the State of Israel and decades before the occupation of the territories. Quite true. Anti-Semitism, just like other forms of racism and hatred for “the other,” including blacks, gays and Muslims, is an age-old phenomenon.

The Zionist movement and those Jews identified as its supporters were always the punching bag of neo-Nazi movements on the right and of anti-Zionist Marxists on the left. Unfortunately, it does not appear that these despicable phenomena will pass from the world in the foreseeable future. They are deeply rooted in the European past and continue to serve extremists on the left and right in their current attacks.

“We are not living here as if we were at the end of the 1930s,” says Simone Susskind, a Jewish left-wing activist from Belgium who supports a two-state solution, “but one cannot ignore the rise in symptoms of anti-Semitism in Europe.”

Susskind, who was just elected to the Brussels district parliament, explains in a conversation with Al-Monitor that Europeans feel more comfortable voicing anti-Semitic discourse and justify it by Israel’s attitude toward the Palestinians. “The growing expression of negative sentiment toward Israeli government policy stems, in part, from classic anti-Semitism, which did not disappear after the Holocaust but was silenced.” According to her, Europeans, like many Muslims, do not differentiate between “Jewish” and “Israeli” and claim that they have a right to oppose Israeli policy in the territories without feeling like anti-Semites.

Nonetheless, the nature of the anti-Israel protests in Europe throughout Operation Protective Edge blurred the lines between political criticism — sharp as it may be — and the anti-Semitic elements who took part in them. The Anti-Defamation League wrote on its site that some of these protests were promoted on Twitter and social media using Hitler-related hashtags, such as #HitlerWasRight and #HitlerDidNothingWrong. In the first part of the series we presented examples of anti-Semitic and racist signs carried at these demonstrations, alongside signs protesting the war and the occupation.

Data provided by various organizations that specialize in tracking anti-Semitism confirm the existence of a distinct link between violence in the Israeli-Palestinian arena and violent incidents against Jews in the world, especially in Europe. The Kantor Center for the Study of Contemporary European Jewry at Tel Aviv University reported that Operation Cast Lead in 2009 resulted in unprecedented anti-Semitic activity around the world. Operation Pillar of Defense in November 2012 resulted in a relatively moderate increase in anti-Semitic activity, probably because it only lasted eight days and the number of Palestinian casualties was relatively small. A special report published by the Anti-Defamation League in August points to “a dramatic upsurge in violence and vitriol against Jews around the world.” The explanation provided by the authors for the new wave was unambiguous: “Israel’s recent military operation to stop Hamas rockets and tunnels in Gaza.”

At the same time, a poll from the Coordination Forum for Countering Anti-Semitism, conducted among the Turkish community in the Netherlands in June 2013, found there was no “organized anti-Semitism, but anti-Semitic expressions related to the Israeli-Palestinian conflict, which have become part of the public discourse.”

Studies published in the compilation “Muslim Attitudes to Jews and Israel,” which includes articles by researchers and Muslim and Jewish clerics, note that Shiite Iran and Hezbollah, as well as al-Qaeda and part of the Sunni Muslim Brotherhood — those leading the anti-Semitic incitement in recent decades — do not represent the central trend in Islam. The researchers contend that Islamic and radical nationalist circles make selective use of religious texts — the Quran and the Hadith — and infuse them with anti-Semitic, anti-Israel or anti-Zionist interpretations. Some of these elements are currently trying to spread the most outlandish theory of all, according to which there is “a Zionist conspiracy aimed at murdering Muslims, spilling their blood and raping their wives and daughters.”

The editor of the compilation, Middle East scholar Moshe Ma’oz of the Hebrew University, told Al-Monitor this week that most of the regimes and elites in the Arab and Muslim world, and even senior religious figures, espouse pragmatic positions toward Israel and the Jews. Ma’oz notes that beside the prevalent anti-Semitic publications in the Arab media and academia, Iran, Turkey and Muslim states in Africa recognized Israel after its establishment and the Hashemite regime cooperated with it for decades. Abdurrahman Wahid, the former president of Indonesia, the largest Muslim state in the world, visited Israel several times, and King Abdullah bin Abdulaziz of Saudi Arabia initiated encounters with Jews in the United States and Europe.

Ma’oz, like Susskind, has no doubt that an end to the Israeli-Palestinian conflict — and especially an agreed-upon solution to the dispute over the holy sites of Islam in Jerusalem — would curb the anti-Semitism and anti-Israel trends among Muslims. He says that if Israel manages to exit the circle of violence, it would neutralize significant components among the protest communities, and, as a result, against the Jews.

In fact, most of the public is not aware of the optimistic aspect of the anti-Israel protests that lends itself to a solution. It is not rooted deeply in Marxist hatred or European anti-Semitism, but rather, it could disappear with a solution to the Israeli-Palestinian conflict.

I will end with comments made by Justice Minister Tzipi Livni during a governmental debate on the issue of anti-Semitism in January: “The refuge of those who don’t want a diplomatic arrangement is to claim that the criticism directed at Israel over the settlements stems from anti-Semitism.”

We will expand on this in the next chapter.