Anti-Israelism, not anti-Semitism, voiced in Europe

Does the sometimes virulent criticism of Israel in Europe, and around the world, reflect a rise in anti-Semitism or anti-Israelism? 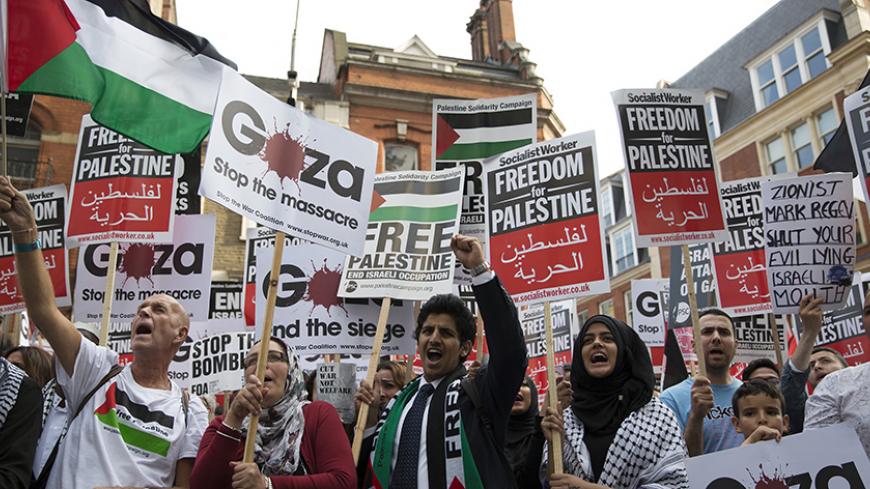 Protesters chant during a pro-Gaza demonstration outside the Israeli Embassy in London, Aug. 1, 2014. - REUTERS/Neil Hall

Those who read the international press on a regular basis, especially those with an interest in what happens to the Jewish people in Israel and around the world, might have come away with a gloomy picture of the situation in Europe over the last month. Reports of mass flight and such words as “pogrom” and “Kristallnacht” kept appearing. The current situation was compared with the era of Nazi rule in Germany. Anti-Israeli sentiment has significantly increased during Operation Protective Edge in the Gaza Strip and was manifested in many protests around the continent, but apart from such sentiment, is there any evidence supporting the assumption of our being in the midst of a new and powerful wave of hatred toward Jews?

The Kantor Center for the Study of Contemporary European Jewry at Tel Aviv University occasionally publishes reports on occurrences of anti-Semitism on the continent. During the Gaza conflict, the center published photos on its website showing demonstrations against the war under the headline “Anti-Semitic photos from demos for Gaza (July-August 2014).” Another page featured “Anti-Semitic cartoons and caricatures (July-August 2014).” Among the slides are images of demonstrators' signs combining a swastika with the Star of David, anti-Semitic slogans, cartoons and photos of a non-Semitic nature of people protesting the war and the occupation, and caricatures of Prime Minister Benjamin Netanyahu bombing Gaza. Many demonstrators sport kaffiyehs, the traditional Middle Eastern headdress, and attire bearing the Palestinian flag or its colors. Most of the illustrations are taken from newspapers and websites from the Arab world.

The appearance of racist, anti-Jewish elements at protests, including despicable slogans like “Return them to the gas chambers,” has blurred the boundaries between anti-Semitism and criticism of the settlement policy of the Israeli government and its conduct of Operation Protective Edge. Demonstrations against the slaughter of some 2,000 Gazans, including more than 400 children, have been filed next to the anti-Semitic remarks of Hamas figures, such as Osama Hamdan, who claimed that Jews bake matzo, the Passover flatbread, with the blood of Christian children. More than once, Jewish leftists have participated in these demonstrations, including some who consider themselves Zionists.

The July 29 cover story in Newsweek magazine, with the sensational headline “Exodus: Why Europe’s Jews Are Fleeing Once Again,” opens with a comparison of a July 14 attack by demonstrators on a Paris synagogue and the dark days of the 1930s in Europe. The article reports that according to a survey by the Fundamental Rights Agency of the European Union from the end of 2013, 29% of European Jews have considered emigrating, while 76% of respondents believe anti-Semitism has increased in the last five years.

Has there indeed been a dramatic rise in anti-Semitism in the world and in particular in Europe? The answer is no, based on data the Kantor Center and the European Jewish Congress published in April. The report records 554 anti-Semitic incidents worldwide in 2013. In the previous year, they documented 686 incidents. These episodes included physical attacks on Jews and Jewish sites (synagogues, community centers, schools, cemeteries and memorials) and private property.

The highest number of incidents in a single country, 116, was documented in France, where the largest European Jewish community, about 600,000 people, resides. Even if one triples the number of incidents, assuming that not all were reported or documented, it is clear that it is a wild exaggeration to compare the phenomenon of anti-Semitism at the beginning of the 21st century and the Nazism of the 1930s or the pogroms in Russia. The radical right in France, as in Germany, Austria and the Scandinavian countries, has ridden the waves of hatred and fear of growing Muslim communities more than waves of anti-Semitism toward small and non-threatening Jewish communities.

Data from the Ministry of Aliyah and Immigrant Absorption indeed show an increase in the number of immigrants from Western Europe in recent years: from 3,339 in 2012 to 4,694 the following year. In the first five months of this year, 2,402 Israeli Jews immigrated to Western Europe, which reflects an annual rate of 5,764. These, however, are negligible numbers compared to the population of Western European Jews, who numbered more than 1.1 million in 2013, and far from the extent of Russian immigration in the 1990s, which reached a million people. An “exodus” it surely is not.

To measure the real extent of the phenomenon of anti-Semitism in the world in general and in Western Europe in particular, one must detach it from any connection to Israel in general and the occupation in particular. The cry of “Help, anti-Semitism!” distracts from the cry of “Help, occupation!” In this context, it is interesting to note a July 24 article by Yasmeen Serhan, a Palestinian American student, published on the website +972 under the headline “Anti-Semitism has no place in Palestine advocacy.” Serhan called on supporters of the Palestinian people to fight against any kind of zealotry or violence toward Jewish communities. In her words, expressions of anti-Semitism provide ammunition to those who wish to portray all advocates of Palestine, many Jews among them, as anti-Semites.

A linkage between the Jewish people and Israel in the consciousness of world public opinion associates members of Jewish communities around the world (for good and bad) with responsibility for the actions and failures of Israelis. In the 1967 Six-Day War and immediately after it, Israel was hailed worldwide. Many young non-Jewish people from various nations volunteered to pick oranges on kibbutzim. The erasure of the Green Line with dozens of settlements and outposts, however, has turned the Jews of the Diaspora, like all Israelis, into participants in the injustices of the occupation. The signing of the Oslo Accord turned Israel into a source of pride for Jews around the globe, but the photos of Israeli soldiers chasing children in the West Bank and reports of Palestinian families killed by bombs dropped by Israeli air force pilots have turned Israel into a burden on the shoulders of every Jew.

In coming articles, I will examine who gains and who loses from the exaggerated descriptions of the phenomenon of anti-Semitism. I will look into the motives of those elements who inflate and nurture this phenomenon, and the means of achieving that.