The shooting at the Jewish Museum in Brussels coupled with the rise of the extreme right in recent EU elections brings the “new anti-Semitism” into Israeli public discourse, though the context of these two events might hide another reality. 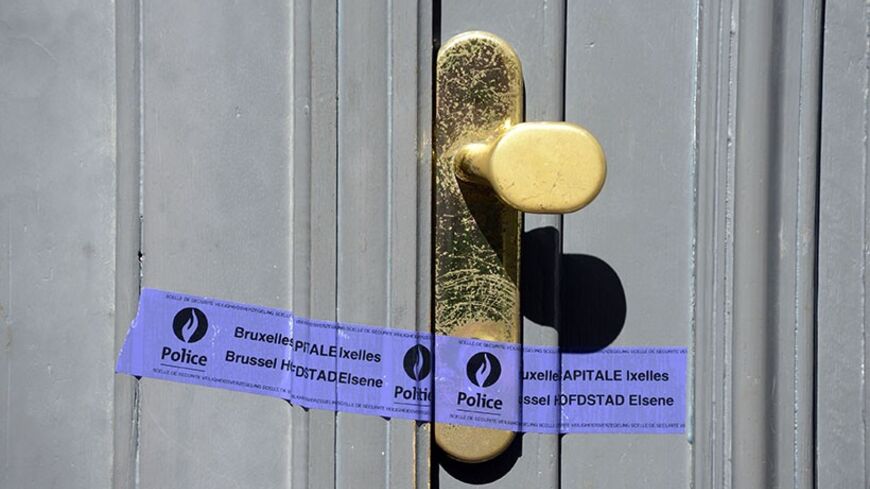 A police tape is seen over the entrance of the Jewish Museum, the site of a May 24 fatal shooting in central Brussels, May 25, 2014. - REUTERS/Eric Vidal

On May 24, an unidentified person wearing a baseball cap and carrying two large bags walked into the Jewish museum in Brussels. Pulling out a gun, he shot and killed four people and fled the scene. The common turn of phrase “the police are hunting him down” is inaccurate, because the police in Belgium do not have any lead and have no idea who to run after or where. The man appears to have vanished into thin air.

Two of the people killed in this deadly rampage were an Israeli couple from Tel Aviv, Emmanuel and Mira Riva, ages 54 and 53 respectively. According to various accounts, they were on vacation, celebrating their wedding anniversary. The other victims were a volunteer at the museum and one of its employees. The Belgian authorities called it a “hate crime” and Belgian police officials say it had the hallmarks of an “anti-Semitic crime.”

The next day, elections for the European Parliament were held. The results stunned many across the continent. Voting patterns clearly indicate a sharp rise in the strength of the radical right-wing nationalistic parties, some of which are fascist or neo-Nazi. Almost all of them bear clear anti-Semitic marks. In recent times, though, some of these parties have been trying to camouflage their inherent hate of Jews. Instead, they are embracing more “popular” topics such as a xenophobic stand vis-a-vis immigrants and curbing the waves of Muslim immigration inundating the continent and poised to introduce a historic, rapid and irreversible change to its demography.

These two events and their close proximity brought to the headlines in Israel a discussion about “new anti-Semitism,” and more specifically its disconcerting manifestations in Europe. Over the last few days, the Israeli media has been broaching this topic intensively, featuring reports from the Anti-Defamation League as well as overviews about the fear that mars the daily life of many Jews in many European countries, mainly is some regions in France, Britain, Belgium and other places.

But when you zoom in on the details of the cases cited above, reality may be different. Let’s start with the murder in Brussels. In Israel, it was reported that the Rivas were employees of ''the Prime Minister's Office.'' Oftentimes, this is a common codename here for any types of agents — be they from the Mossad, Shin Bet or other organizations. In accordance with the law, these people fall under the administration and responsibility of the Prime Minister's Office. Official Israeli sources emphatically denied the possibility that the Rivas were assassinated against this backdrop or that they were engaged in any sort of covert intelligence activity. Notwithstanding, speculation abounds and European diplomatic and intelligence officials do not rule out the possibility that the incident in Brussels was, in fact, part of a secret intelligence war raging between various espionage organizations across the globe.

Upon examining the incident, this estimate gains traction. The attack on the Jewish museum was carried out professionally. The murder seems to have been a premeditated assassination that was skillfully executed. It is by no means reminiscent of other hate crimes that are characterized by random and sloppy execution. Wearing a baseball cap and carrying two side bags, the assassin walked in rapidly and pulled out the firearm (rifle) from one of the bags. He shot four people, all of whom eventually died. Putting the rifle back in the bag, he left the museum hurriedly. Instead of running away through the streets, he vanished in a brisk walk.

Those engaging in intelligence work and intimately familiar with assassination methods know full well that this execution cannot be ascribed to some random operation. This was a premeditated move and it is possible that the two museum employees who were murdered, on top of the Israeli couple, paid with their lives to attribute an anti-Semitic character to the incident.

As noted, this version has not been corroborated by any official sources. Quite the contrary; it is being emphatically denied. It is certainly possible that the incident was carried out by a Jew hater who carefully masterminded the murder, perhaps drawing his inspiration from spy movies or novels. The Belgian police do not volunteer any unnecessary details and the mystery will be resolved only if the perpetrator is caught. At this stage, the chances of this happening are estimated to be very slim.

And now about anti-Semitism. Indeed, the radical right is taking over Europe, at least according to the results of the elections to the European Parliament. The question remains whether this is directly linked to anti-Semitism. According to the last report on anti-Semitism published on April 27 by the Kantor Center at the University of Tel Aviv, whose director is esteemed professor Dina Porat, the number of anti-Semitic incidents in Europe last year actually dropped. Looking at the countries that saw the most significant rise of the radical right, one cannot detect a direct correlation between that and the level of anti-Semitism in those counties. Accordingly, any conclusion bundling together classic anti-Semitism against Jews and the strengthening of the extreme-right-ultranationalist phenomenon in Europe would be superficial.

The reality that is emerging in the wake of the recent events is a fascinating mixture. Two main types of anti-Semitism are festering in Europe. There is the “old,” classic European anti-Semitism, which sees Jews as “bloodsucking parasites,” and which has been part of the genetic makeup of some Europeans for centuries. This type of anti-Semitism underwent an especially mad and extreme genetic mutation during the years of Adolf Hitler and his race doctrine. It resulted in the extermination of a third of the Jewish people during World War II.

Flourishing next to it is modern-day new anti-Semitism, stemming from radical Islam that washes over Europe together with the wave of Muslim immigration. It is no secret that the awakening of the ultra-right nationalistic parties, whose banner is the fight against Muslim immigration, is directly linked to the expansion of the Muslim communities throughout Europe. There are quite a few Europeans who do not particularly enjoy waking up to the voice of the muezzin, believing that “Europe is for whites.”

Are there any reciprocal relations between these two types of anti-Semitism described above? This is a question better left for historians, psychologists and sociologists. Jewish organizations monitoring anti-Semitic acts and following this phenomenon continue to take action against all manifestations of anti-Semitism.

However, between the lines and in closed talks, quite a few Israelis are actually pleased with the situation. Given the choice between a Europe that turns Muslim and a Europe that turns anti-Semitic, the latter is perceived to be less harmful for Israel. Hence, many Israelis do not perceive the rise of Europe’s radical right parties at the present time to be a real threat, and perhaps the opposite. This might (even) help to curb the Islamization of Europe, which in Israel is perceived to be a disconcerting strategic phenomenon.

Furthermore, we need to bear in mind that the more rampant anti-Semitism becomes and the bigger the Muslim communities grow, the more should immigration of Jews from Europe to other places, chief among them Israel, rise. To complete the puzzle, it turns out that the number of Jewish immigrants from Europe (according to the Kantor Center report) actually dropped in 2013 compared to the previous year.

Yet, this data has one conspicuous abnormality. The most significant rise in immigration to Israel is attributed to France, from where the number of Jewish immigrants rose in 2013 by 50% compared with the year before (3,200 compared with just a little over 1,500 in 2012). When it comes to the number of troubling anti-Semitic incidents, France leads the way. The horrific terrorist attack in Toulouse on March 9, 2012, during which a French-Algerian Muslim terrorist, Mohammed Merah, murdered a teacher and three Jewish children at the Jewish school, was a pivotal event for France’s Jews, many of whom are thinking of “packing their suitcases,” debating whether France remains the place where they should live. Many say that they are afraid of walking around the streets wearing skullcaps. Many others encounter anti-Semitic phenomena on a daily basis. Israel will monitor, for now, whether the rise of right-wing parties in Europe contributes to a new anti-Semitism.