While Israeli leaders tend to be open to at least discussing US peace initiatives, European proposals, most recently a French effort, are perceived as anti-Israel. 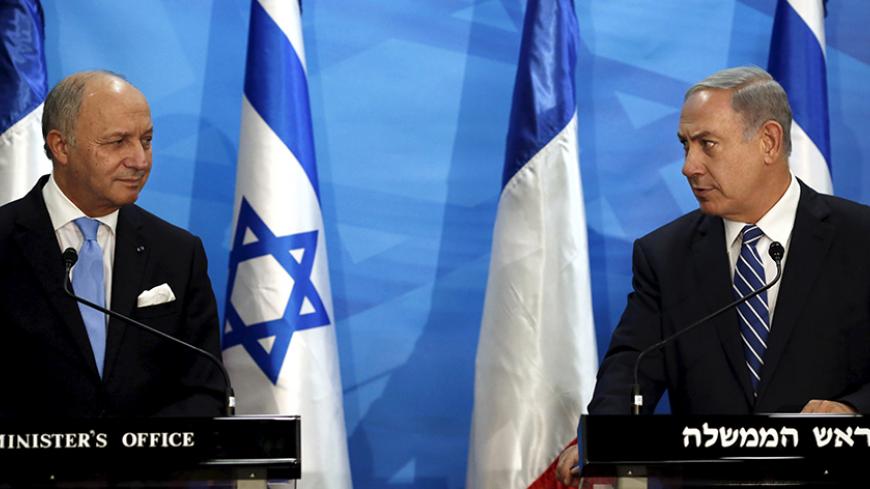 Israeli Prime Minister Benjamin Netanyahu did not wait for his afternoon meeting June 21 with French Foreign Minister Laurent Fabius to hear what his European guest had to say and to express his reservations regarding the French peace initiative. At the start of the weekly Cabinet meeting that morning, Netanyahu attacked the French “dictate.” He claimed that the initiative does not take Israel’s security needs into account and seeks to “push us into accepting indefensible borders while completely ignoring what will be on the other side of the border." He was referring to a proposed resolution that France wishes to submit to the UN Security Council (UNSC), based on recognition of a Palestinian state within the 1967 borders and 18 months of negotiations between the sides over land swaps.

The prime minister strenuously objects to any mention of the 1967 borders and refuses to set a negotiating timetable. He also protests against the French threat that if the sides fail to reach agreement during the allotted time — including an agreed-upon solution to the Palestinian refugee problem and to the dispute over Jerusalem — France will initiate an international conference and announce its recognition of a Palestinian state. Netanyahu reiterates that he is ready and willing to return to negotiations “without preconditions,” especially without an overall freeze of construction in the settlements and in East Jerusalem during the negotiations, while emphasizing that there’s no chance of a two-state solution without Palestinian recognition of Israel as the state of the Jewish people.

It stands to reason that Fabius did not expect a friendly welcome for his peace initiative. Back during the strategic dialogue discussions between Israel and France held at the beginning of May, Israel’s representatives spoke out harshly. They protested in the prime minister’s name against the new initiative France was promoting “behind Israel’s back” to move the diplomatic process from direct negotiations between the sides to an international format or to the UN.

Are we really facing a new anti-Israel European initiative — one that a Republican US president would have killed at its inception? The senior Israeli diplomats complained that France was inciting other European states to label settlement products and formulating other ideas to curb the occupation policy. Was France the one that invented the struggle against the settlements? No, they were phrased in American English and sent to the UNSC by the tenant of the White House at the time, Republican President George W. Bush. It happened 12 years ago, several months after the Quartet ratified the 2002 "Performance Based Road Map to a Permanent Two-State Solution to the Israeli-Palestinian Conflict" and the Security Council voted overwhelmingly in favor of the US resolution to formalize the road map into UN Resolution 1515.

Among other things, the document read that negotiations would be “based on … [UN Security Council Resolutions] 242, 338 and 1397 … and on the initiative of Saudi Crown Prince Abdullah — endorsed by the Beirut Arab League Summit” leading to creation of a “viable, sovereign Palestinian state.” An agreement would include “a just, fair and realistic solution to the refugee issue, and a negotiated resolution on the status of Jerusalem that takes into account the political and religious concerns of both sides, and protects the religious interests of Jews, Christians and Muslims worldwide.”

The resolution also noted that along with an end to the Israeli-Palestinian conflict, the Arab states would agree to full normalization of their ties with Israel and to security for all states in the region.

Security Council Resolution 1515 of 2003 did not stop at outlining the principles of the arrangement. It presented a detailed timetable for each stage of the road map. The target date for signing a permanent arrangement and regional peace was December 2005. According to the resolution, before that deadline, already in the first stage, Israel’s government was required to freeze all settlement activity (including the natural growth of the settlements) and dismantle all the outposts set up since March 2001.

The government of Prime Minister Ariel Sharon, of which Netanyahu was a senior member, discussed the road map and approved it with 14 reservations (none about the section requiring Israel to freeze settlements and dismantle outposts). The Security Council resolution completely ignored Israel’s reservations (including its objection to the 2002 Arab Peace Initiative). Nonetheless, no one accused Bush of harming Israel’s security. No minister suggested that the United States had become anti-Zionist or anti-Israel. “Anti-Semitism” was not even hinted at.

Such is not the case when Europe dares raise its head against the occupation. Here, history and hysterics have always been on Israel’s side. In 1980, several months after the nine member states of the European Community declared in Venice that the Palestinians have a right to self-determination and called for an end to the Israeli occupation, Prime Minister Menachem Begin said, “One cannot distinguish between anti-Israelness or anti-Zionism and between anti-Semitism, which brought about disaster and disgrace on the whole of humanity. … Jews were murdered, the world was silent and the Jews did not defend themselves. The French should be reminded of this.”

Over the past year, Israeli politicians have made use of a series of terror attacks by radical Muslims in Toulouse (2012) and Paris (2015) — against Jewish targets, among others — for an emergency campaign against a supposed wave of anti-Semitism/anti-Zionism/anti-Israelism. According to the Ministry of Immigrant Absorption, the Jews of France did not panic, responding sparingly to the call to flee to Israel. In the first five months of this year, there was a 19% drop in the number of immigrants from France compared with the same period last year. Israeli spokespersons on the right and the center portray the predominantly European boycott, divestment and sanctions phenomenon as anti-Semitism in the guise of objection to the occupation, and say the boycott on settlement products is being done to curry favor with the Muslim electorate. A series of reports by Channel 10 News correspondent Zvi Yehezkeli ("Muslims in Europe") created the impression among many Israelis that a significant portion, if not most, of Europe’s Muslim residents are active or potential terrorists. Yet, the Israeli audience did not hear enough about dozens of Muslim families who requested the help of the French government in rescuing their young family members who had been enticed into joining the ranks of the Islamic State.

Israel expects France, like the other European states, to adopt the passive and polite approach of the Germans, whose conduct toward Israel is hobbled by the long shadow of past guilt. This approach was recently reflected in Cologne, with the cancellation (following intervention by the Israeli Embassy) of an exhibition put on by the Israeli nongovernmental organization Breaking the Silence, which displays the heavy damage inflicted by the occupation on Israeli society. It is that very society that is gradually losing the holy democratic trinity of freedom, equality and fraternity.