Israeli Prime Minister Benjamin Netanyahu views the boycott campaign against Israel through a prism of anti-Semitism and is avoiding public debate over the BDS movement's motives, namely the occupation. 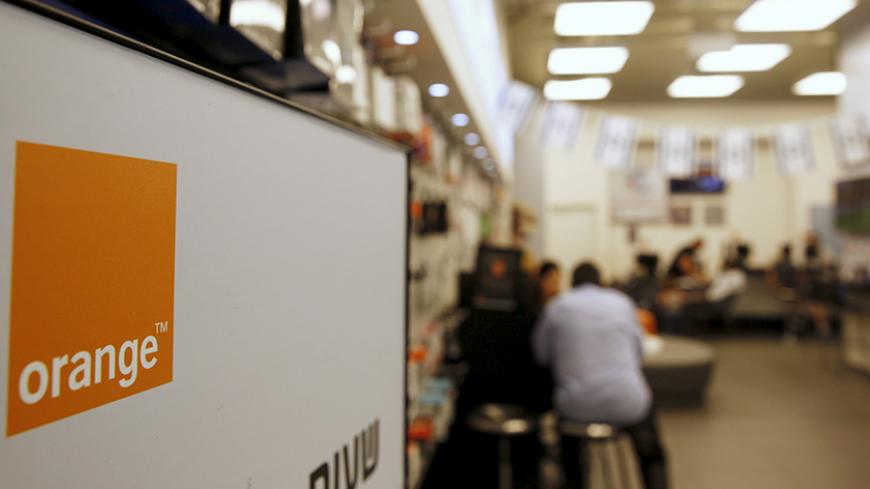 The logo of the Orange mobile company is seen in a store at a Jerusalem mall, June 5, 2015. - REUTERS/Ronen Zvulun

Israeli Prime Minister Benjamin Netanyahu met with visiting Canadian Foreign Minister Rob Nicholson on June 3 and used the photo op at the start of the meeting as an opportunity to attack the United Kingdom’s National Union of Students. On the evening before the meeting, that group decided to support the boycott, divestment and sanctions movement and adopt the principles of the wide economic, cultural and academic boycott of Israel. In the position paper it issued, the organization explained, among other things, that the decision stemmed from "Israel’s ongoing illegal occupation of Palestine."

Thus, standing alongside the senior representative of one of the world’s friendliest countries to Israel, buoyed by his sympathetic presence, Netanyahu used his usual arguments to attack the decision by the British student organization and wondered how it was possible that just a year ago, it had refused to condemn the Islamic State.

A few days earlier, Netanyahu was asked about the failed Palestinian attempt to suspend Israel from FIFA, and he attacked the unilateral Palestinian initiatives that he said hurt the prospects of promoting an arrangement in the region.

To add to it all, that night, the Orange storm erupted, after the CEO of the telecommunications giant, Stephane Richard, declared that he would be willing to cut ties with Israel “tomorrow morning.” The next day it turned out this was no bluff, and Orange issued a statement backing his declaration. Despite Israel’s demand that the French government, part owner of the company, condemn his words, it did not. The French Foreign Ministry issued a short declaration on the issue.

On June 4, Netanyahu took part in a ceremony commemorating the victims of the Altalena Affair and called on the French government to renounce the boycott and once again attacked Israel’s critics with the usual rhetoric.

On June 5, Yedioth Ahronoth published an interview with Richard, who appealed to Israelis and claimed he'd been misunderstood. But those comments are not compatible with his words in Cairo, where Richard linked the Palestinian issue with his desire to sever ties with Israel. This means that more commercial firms may sever ties and boycott Israel in the very near future, citing business interests without officially announcing their support for the BDS movement.

Amid all the excitement, Israel’s Channel 2 aired a scathing interview with US President Barack Obama, who warned that the United States would be hard pressed in the future to defend Israel at the United Nations, given the continuing occupation.

For now, this was the finale of a grim week for Israeli diplomacy. Netanyahu, for his part, ignored Obama’s comments, taking care in all his public reactions to the growing boycott tide to address the Israeli public — the same public that just three months ago handed him a fourth term in office as prime minister. In Netanyahu’s narrative, the story is black and white, one of the new anti-Semitism and the world's hypocrisy toward Zionism and the Jews.

This one-dimensional narrative, with Netanyahu as its most prominent and articulate storyteller, deliberately ignores the complexity of the boycott issue. The industry of lies spread by the BDS movement and the sweeping delegitimization of Israel, tinged with a new brand of anti-Semitism, is nurtured by the diplomatic freeze and the fact that Israel under Netanyahu is perceived as a peace refusenik. The narrow right-wing government is perceived by the world as colonialist.

Until less than a year ago, Netanyahu still conducted a semblance of diplomatic negotiations with the Palestinians and his government included center-left parties headed by Hatnua's Tzipi Livni and Yesh Atid's Yair Lapid. The diplomatic negotiations orchestrated by US Secretary of State John Kerry protected Israel and delayed the diplomatic tsunami. Israel failed to correctly assess its scope and speed. The BDS movement, which until two weeks ago was largely unknown to most Israelis — and those who knew it considered it an esoteric movement of radical Israel-haters — caught Israel unprepared, almost surprised, even though the writing had been on the wall for some time.

Netanyahu continues to fight this phenomenon using the anti-Semitism narrative to prevent a substantive public debate in Israel on the reasons for the boycott. He is afraid that this debate could, heaven forbid, expose the correlation between the diplomatic tsunami and the fact that the world, even while supporting Israel, cannot accommodate the occupation, especially when the nation in question is a democratic one ruling another people, and even if these people are aggressive and receive Iranian money to carry out terrorist attacks.

While Israeli politicians on the center-left are hesitant to react, afraid to arouse suspicions of being overly leftist, billionaire Haim Saban, who has the controlling interest in Partner, which operates the Orange franchise in Israel, best explained the complexity of the situation. Saban, one of the biggest supporters and funders of the US Democratic Party, attacked Orange in a June 4 interview on Israeli Channel 2, accusing it of giving in to anti-Semitic entities. But when asked about the link between this situation and the absence of an Israeli diplomatic initiative, he answered forthrightly that the current government has well-known views and if it acts according to these views, “then we're in enormous trouble.”

Over the weekend, Saban is scheduled to hold a summit with another Jewish billionaire, gambling tycoon Sheldon Adelson, Netanyahu's greatest supporter and a major backer of the US Republican Party. On the agenda: forming a united front to fight the anti-Israel boycott. The meeting was scheduled even before the storm over Partner, and the two are expected to allocate money and express their commitment to help Israel in its fight.

This is undoubtedly a state of diplomatic emergency. But in the very week that Israel marks the 48th anniversary of the Six Day War, the debate in Israel has to be deeper and more nuanced than slogans such as “The whole world is against us” and “anti-Semitism is raising its head.”

It’s no coincidence that Netanyahu has refrained this week (so far) from referring to the anniversary of the Six Day War. Netanyahu does not want to provoke a debate among the Israeli public about the link between the long occupation, the absence of a diplomatic initiative and the boycott. It does not provide any justification for the story he has been telling Israelis. If he can, he will probably soon try to expand his government and bring in the Zionist Camp to calm the diplomatic storm and prop up his shaky coalition.

Netanyahu, too, knows that most Israelis, as illustrated by public opinion polls in recent years, support the two-state solution and do not want to keep seeing themselves as occupiers. But in as much as the other side is perceived as a recalcitrant terrorist entity rejecting the generous proposals by former Prime Ministers Ehud Barak and Ehud Olmert, it is easy to deny the occupation and the settlement enterprise, which pushes a solution further and further away the more it flourishes. And on this Netanyahu has built his career.