On the backdrop of rising violence against Jews in Europe, Israeli envoys are relieved to hear Europeans argue about whether anti-Zionism is a form of anti-Semitism. 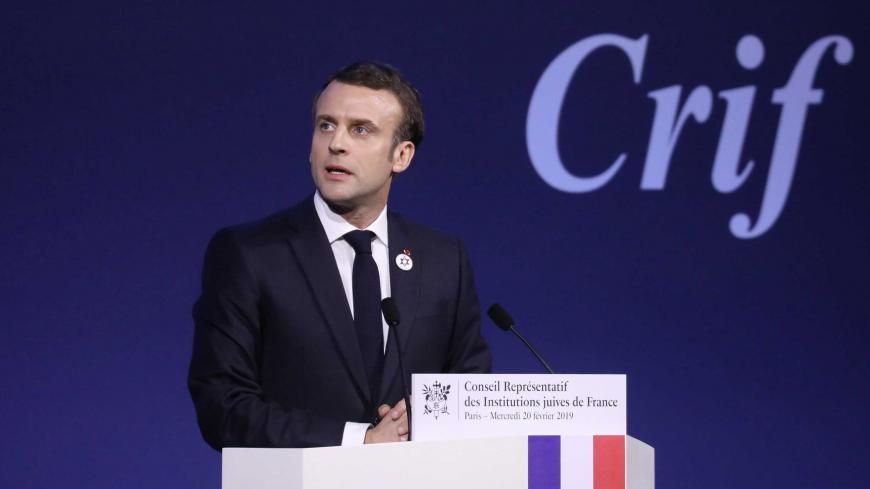 French President Emmanuel Macron speaks during the 34th annual dinner of the Representative Council of Jewish Institutions of France at the Carrousel du Louvre in Paris, France, Feb. 20, 2019. - Ludovic Marin/REUTERS

French President Emmanuel Macron is the direct type. As such, his address at the annual dinner for the French Jewish umbrella organization on Feb. 20 offered a clear and direct vision of his government’s battle against the recent rise in anti-Semitic attacks. But Macron went further, rejecting any attempts to negate Israel’s right to exist. He argued, "Anti-Zionism is one of the modern forms of anti-Semitism. Behind the negation of Israel's existence, what is hiding is the hatred of Jews," His words pleased not only the Jewish French leaders who came to listen to their president, but also Israeli ambassador Aliza Bin Noun, who had been invited for the occasion.

Some French politicians went even further. Interviewed on Tuesday, parliament member Sylvain Maillard, Macron’s fellow party member, said, “Anti-Zionism must be punished the same way that anti-Semitism is punishable. It is crucial to say that what is forbidden is to deny the existence of Israel. … However, you obviously have the right to say you do not agree with the policy of the Israeli government. That is normal in a democracy."

The debate echoes the Israeli Foreign Ministry’s analysis of anti-Zionism. Israeli diplomats in Paris and other European capitals have changed course in recent months in their public diplomacy campaign. The battle against the Boycott, Divestment and Sanctions movement (BDS) is still a priority and so is explaining Israel's military actions on the Gaza border, but the issues of occupation and settlement have been gently pushed aside. The new game is now battling anti-Zionism.

Many Israeli diplomats admit privately that serving in Europe has become more difficult and demanding over the years. One who served in London a few years ago told Al-Monitor about the desperate campaign he and his colleagues conducted against a critical public opinion during the 2014 Gaza war. “Demonstrations against Israel became quite violent, with cries not only against Israel but also against Jews. Swastikas were painted on walls. Protesters were calling to eliminate the State of Israel. This was way beyond criticizing the Israeli government or the IDF. Still, any appearance of us, Israeli diplomats, on mainstream media outlets was a battle on its own. No one wanted to listen to us," he said, speaking on condition of anonymity.

A senior official at the Foreign Ministry in Jerusalem pointed to a long-standing problem concerning Israel’s public diplomacy, specifically BDS. “BDS is very much present on American campuses, especially in California, and we are expected to thwart their campaign. But these efforts are championed by another bureau [Israel’s Strategic Affairs Ministry]. Anti-Zionism and anti-BDS campaigns might overlap, but BDS is also about settlement products. Anti-Zionism is not," he said, asking that his name not be divulged.

Europe has not changed its mind or toned down its objections to the settlement enterprise. But alongside criticizing Israel, a new European debate is emerging and seems to be reaching the center of Israeli diplomacy. It's a cause that is clear, unapologetic and in a way, easier to defend.

Speaking ahead of a demonstration in Paris on Feb. 19 against the rise in anti-Semitic acts, Bin Noun said, “The general accent seems to be on anti-Semitism, with less of a debate about anti-Zionism. There are those who claim that they have the right to criticize the policies of the Israeli government. But anti-Zionism is not criticism. Anti-Zionism negates the legitimacy of the State of Israel, its right to exist."

Israeli diplomats in France have been repeating this official line, an argument that is falling on receptive ears, after the insults hurled Feb. 16 against Jewish French philosopher Alain Finkielkraut. A radical Salafist activist with some friends who participated at a yellow vest demonstration yelled at Finkielkraut: “Dirty Jew," “Dirty Zionist shit" and “Go back to Tel Aviv." A video of the incident went viral, playing on all the local news shows that evening.

The clip, alongside the desecration of 80 headstones at a Jewish cemetery in Alsace, brought thousands of French citizens to the streets. It was the first time in France that an alliance of 14 political parties from across the political spectrum organized a mass rally against the rise in anti-Semitism. There were about 20,000 people at the Paris Place de la Republique on the evening of Feb. 19 alongside Prime Minister Edouard Philippe and former French Presidents Nicolas Sarkozy and François Hollande. The unusually quiet and respectful demonstration offered no politician a stage. Many of the people Al-Monitor spoke with at the rally rejected rhetoric negating Israel’s right to exist. The European Union has been wrestling with the notion of anti-Zionism for a while now, with Prime Minister Benjamin Netanyahu pushing for a broad definition of anti-Semitism. On Dec. 5 last year, the Council of the European Union urged member states to use the definition of anti-Semitism "employed by the International Holocaust Remembrance Alliance … as a useful guidance tool in education and training."

This non-legally binding definition, referred to in the EU text, includes a specific clause that refers to Israel, stating that anti-Semitism is also "Denying the Jewish people their right to self-determination, e.g., by claiming that the existence of a State of Israel is a racist endeavor." In the months that preceded the 2018 statement, Netanyahu had pushed for the EU to adopt this wide definition of anti-Semitism as a binding text. Israeli diplomats stationed in Brussels had convinced the Austrian delegation (which held the EU presidency), to present an inclusive text to the council, but other EU members objected to the proposal, fearing that it could limit freedom to criticize the Israeli government’s policies.

The emerging European debate on whether anti-Zionism should be separated from criticism against Israel relieves Israeli envoys. Diplomats are expected to keep their opinions to themselves, and Israeli diplomats are no exception. These professional civil servants are usually very careful to publicly voice only the government line. Only upon retirement do some of them reveal their true positions. In fact, several retired ambassadors are now engaged in politics, rejecting Netanyahu and right-wing policies. In an article penned by former Ambassador Ilan Baruch in 2016, the retired diplomat wrote, “It has been five years since I breathed a sigh of relief and left Israel’s Foreign Ministry building. No more would I represent the Netanyahu government’s hasbara [public diplomacy] as a diplomat and attorney." Baruch’s words echoed sentiments shared by quite a few retired and active diplomats, eroded by the obligation to defend human rights breaches in the West Bank and even inside Israel.