The BDS movement has been active in South Africa for years, but it's the local Jewish community, not Israel-South Africa bilateral trade relations, that are paying the price of the boycott calls. 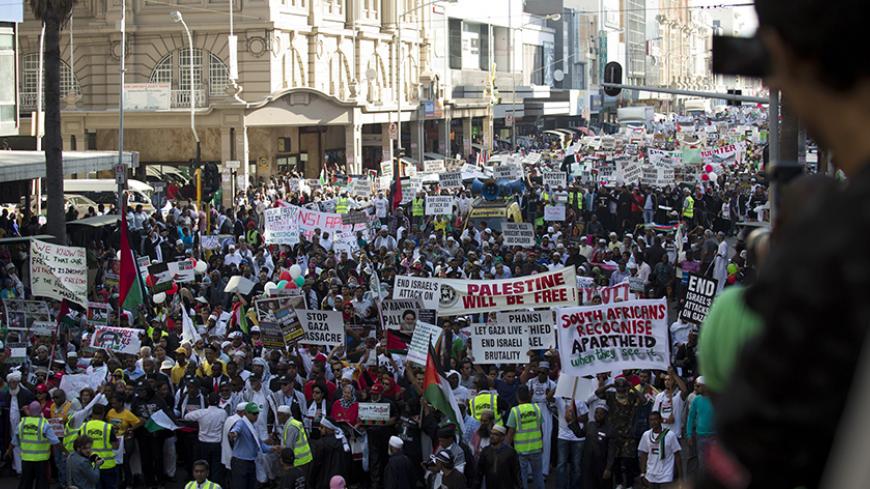 The South African boycott, divestment and sanctions movement recently started a Facebook campaign to boycott the supermarket chain Woolworths. The move comes as another phase in the movement's battle against Woolworths, which sells products from the Israeli settlements. On May 15, thousands of South African students, including high-schoolers, demonstrated at the Free State province against Woolworths, in a mass rally organized by the Congress of South African Students “in solidarity with the people of Palestine, who continue to experience the harshest form of apartheid by the Israeli regime.”

South African activists are certainly not on their own in their boycott efforts. Stephane Richard, CEO of French telecommunication giant Orange, said in Cairo June 3 that he would have liked to relinquish his company's ties with its Israeli brand representative Partner, if not for the risk of severe financial penalties. His remarks are a sign of the momentum this movement has gathered internationally. Even if Richard tried later to dissociate himself from the BDS movement and actually retracted his initial statements, the Israeli media perceived his remarks as a clear boycott statement. Be that as it may, while the boycott call is spreading rapidly throughout Europe, South Africa is essentially alone among the non-Arab-Muslim countries of Africa.

South Africa's solidarity with the PLO and the Palestinian national movement can be traced back to its own days of struggle against apartheid. Close relations were formed in the 1960s between the two movements, with Israel perceived as an ally of apartheid South Africa. But the South Africa of 2015 as well as 2015 Israel are both a far cry from their former selves politically or economically. South Africa also lies thousands of miles from Israel and has but a tiny Palestinian community. Despite all that, the campaign against Israel there has grown louder over the years.

Already in 2012, South Africa's Trade Minister Rob Davies announced that West Bank settlement products could not be labeled as "made in Israel." Currently, BDS activists call not only for a boycott against Israeli settlement products, but for a comprehensive cultural and academic boycott. Though the boycott is not officially practiced, Israeli artists, researchers and musicians are often welcomed by demonstrations or simply find their scheduled visits canceled. A tour by an Israeli minister in South Africa under the current circumstances could hardly be envisaged.

The campaign is spearheaded by the local BDS movement, a civil entity, but elected politicians and public personalities take an active part in it. Kwara Kekana, one of the South African campaign managers, told Al-Monitor that the ruling "ANC resolved at its Mangaung conference in 2011 to support a campaign of boycotts. Furthermore, last year in 2014, its highest decision-making body in between conferences, the National Executive Committee, resolved to support the call for academic and cultural boycotts."

Echoes of the South African political line could be detected on April 24, when local news outlets reported that the Israeli consulate in Pretoria denied Education Minister Blade Nzimande a visa, thus preventing him from heading a delegation to visit Birzeit University in Ramallah. A ministry spokesperson told the media then that Israel denied Nzimande a visa because he was “one of the most vocal anti-Israeli government ministers.”

Israeli Prime Minister Benjamin Netanyahu recently declared a diplomatic war against the boycott movement. But South Africa seems to be a case apart. Israeli Ambassador to South Africa Arthur Lenk told Al-Monitor that the Israeli presence in African markets, including the South African market, is continuously growing, with a steady increase over the past five years in Israeli exports to South Africa, Kenya and Nigeria in particular. The South African boycott calls, he says, do not affect bilateral trade.

Lenk believes that the local campaign has but a minor influence on local politics and none at all in the international arena. He said, "The boycott calls originate within a small group of extremists, hoping to gain the Muslim vote. But the great majority of South African citizens simply don’t care. Just last week I visited the Eastern Cape region. About 200 people showed up to a first-of-its-kind agriculture seminar we opened there." He adds that when all is said and done, the local boycott campaign is "much noise, little content."

Not all Israeli diplomats see Israeli-South African relations as Lenk does. Several of them, speaking on condition of anonymity, told Al-Monitor that the BDS campaign does have a decisive impact over South Africa's already pro-Palestinian official policy. They agree that the South African government has generally rejected demands to officially sanction Israel, but they fear that such actions could be embraced in the near future. On a scale of friendliness to Israel, they position South Africa as a leader of anti-Israeli international public campaigns. A diplomat who served in Pretoria recounted to Al-Monitor the enormous difficulties of even making an appointment with his counterparts at the South African Ministry of International Relations and Cooperation.

Be that as it may, whether Lenk is correct in his conception or not, the local Jewish community is not at ease. And while Jewish leaders were careful in the past to dissociate the anti-Israeli campaign and the coexistence of the Jewish community with its neighbors, many of them now feel that the BDS movement has crossed that line. Anti-Israelism — or anti-Zionism — has given way to signs of anti-Semitism.

"They are certainly creating a hostile environment where anti-Jewish sentiment can flourish. BDS campaigns end up as anti-Semitism despite the BDS movement’s protestations that they are a human rights organization opposed to anti-Semitism," said Wendy Kahn, national director of the South African Jewish Board of Deputies. As examples, she cited the BDS protest during the Daniel Zamir jazz concert at Johannesburg Wits University, a demonstration that ended with the singing of "Dubula e’Juda" ("Shoot the Jew"). Pigs' heads have also been placed on kosher meat shelves in Woolworths.