The harsh remarks emanating from Turkey and South Africa indicate that it's OK to criticize Israel while strengthening ties with Iran. 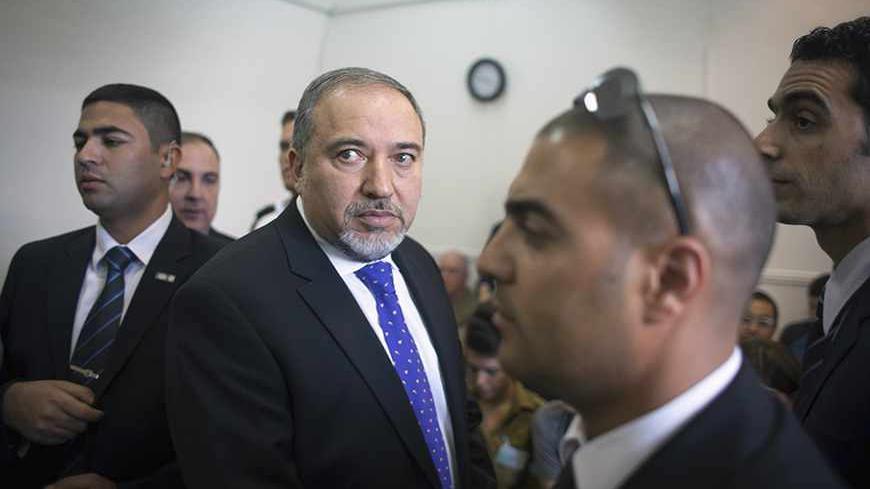 Former Israeli Foreign Minister Avigdor Lieberman (2nd L) waits to hear the verdict in the corruption charges against him at the Magistrate Court in Jerusalem, Nov. 6, 2013. - REUTERS/Emil Salman

Two sharp comments about the state of Israel resonated in the media here last week, Nov. 2. From the north, Turkey’s Foreign Minister Ahmet Davutoğlu vehemently denied reports originating from the Gulf States and Lebanon that his country supplied Israel with intelligence which helped carry out the attack attributed to it against targets in Syria. “Turks have never cooperated with Israel against another Muslim state and never will,” he declared with determination.

A no less decisive remark was published from the south, by South African Foreign Minister Maite Nkoana-Mashabane, comparing the black struggle against apartheid with the Palestinians’ struggle against the Israeli occupation. "The last time I saw a map of Palestine, I couldn't go to sleep. … It is just dots, smaller than those of the homelands," she said, referring to the Bantustans in which the apartheid regime tried to concentrate the black population to more easily control it.

The South African minister declared that given the lack of an agreed-upon solution to the Palestinian national struggle, her country was putting on hold all visits by its government ministers to Israel, and vice versa.

It’s interesting to note that in both these cases, the things were said in the course of visits by Iranian Foreign Minister Javad Zarif in these countries. Even more interesting is that in both capitals, Ankara and Pretoria, and even Tehran, there was once a significant Israeli presence. All three — Turkey, South Africa and Iran — were in the past paramount strategic allies of Israel.

Davutoğlu’s entourage confirmed that he had made the sharp, resolute remarks regarding cooperation with Israel on Syria, but sought to explain that they were directed against the leak, not against Israel. They blamed Syrian elements for publishing the remarks with the intention of delegitimizing Turkey in the Muslim world for the aid it is providing to Syrian forces opposed to the murderous Assad regime. In other words: More than it hesitates to cooperate with Israel, Turkey fears for its image in the Muslim world once such cooperation is exposed.

Generally speaking, I am being told in Turkey that now is not the right time to continue normalizing relations with Israel, given the upcoming local council elections that are considered a test of Turkish Prime Minister Recep Tayyip Erdogan’s strength. Continuing the reconciliation would damage Erdogan's popularity.

Really? I ask. The awareness of Israel and the criticism against it are so significant among the electoral base? Just so, they make clear. “There isn’t a person in Turkey who displays indifference to the suffering of the Palestinian people,” they contend.

In South Africa, too, diplomats confirm that the remarks were indeed made. And there, too, they wish to attribute the strong remarks to the election campaign which has already begun.

The inevitable conclusion from both these explanations is that in order to appease the people and win elections, one must attack and sacrifice Israel. The public is perceived as refusing to forget and forgive.

When these countries were allies of Israel, they were run by a minority that ruled a majority. The ruling minority was the one that chose the strategic ties with Israel, against the wishes of the majority. Today, both Turkey and South Africa are run democratically and it’s been years since an Israeli minister has set foot on their soil, although both maintain diplomatic ties with Jerusalem.

On the other hand, Iran’s foreign minister is circling the globe. A desired and accepted guest in South Africa — which turned into a democracy in the wake of a rigorous sanctions regime imposed by the world on the apartheid government — Zarif continues the “charm offensive” begun by President Hassan Rouhani in New York to ease the burden on Iran. And at the height of these persuasion efforts, Pretoria, the host, announced sanctions it would impose on Israel.

A poll conducted in recent days by the Rafi Smith Institute for the Israeli Institute for Regional Foreign Policies “Mitvim,” indicates that only 8%t of Israel’s Jewish citizens think international sanctions will make them support the peace process; 45% said incentives by the international community were what would cause them to support the process. This shows that for now, Israelis are not afraid of such a punitive step.

Overall, the poll indicates that the public does not view Israel’s foreign policy favorably — 51% of the Jewish respondents think Israel has no clear principles guiding its foreign policy; 55% would like Israel to adopt a more activist foreign policy.

Following the statements by South Africa’s foreign minister, Knesset member Avigdor Liberman, serving as chairman of the Knesset’s Foreign Affairs and Defense Committee, declared: “The regime in South Africa has created an anti-Israel and anti-Semitic atmosphere, which means that a pogrom against the Jews there is only a matter of time.” He called on all the Jews still living there to “immigrate to Israel as soon as possible, before it’s too late.”

Liberman’s response stirred strong anger among South Africa’s Jews. “The remarks are alarmist and inflammatory,” read a statement issued by the community.

As for Turkey, Liberman, as chairman of the Knesset’s Foreign Affairs and Defense Committee, said: “Turkey headed by Erdogan is not interested in improving ties with Israel. That’s why I hope we all stop deluding ourselves and start understanding the reality in which we are living and the difference between the desirable and the obtainable.”

Now that Liberman has been acquitted, and he is preparing to go back to the foreign ministry, it appears that the window of opportunity for reconciliation with Turkey is closing, and ties with South Africa will not be rehabilitated any time soon. One can assume that this is not the proactive foreign policy for which the majority of the Israeli public hopes.

Hopefully, the Israeli government will manage to wean itself from the tendency to glom onto repressive military regimes, and to find its way to the hearts of the peoples and the countries around us and across the sea. It seems that there, in calming the popular rage against the injustice done to the Palestinians, lies the legitimacy for the recognition of ''the Jewish state.''