A new office designed to combat the BDS campaign targeting Israel is to open in January. 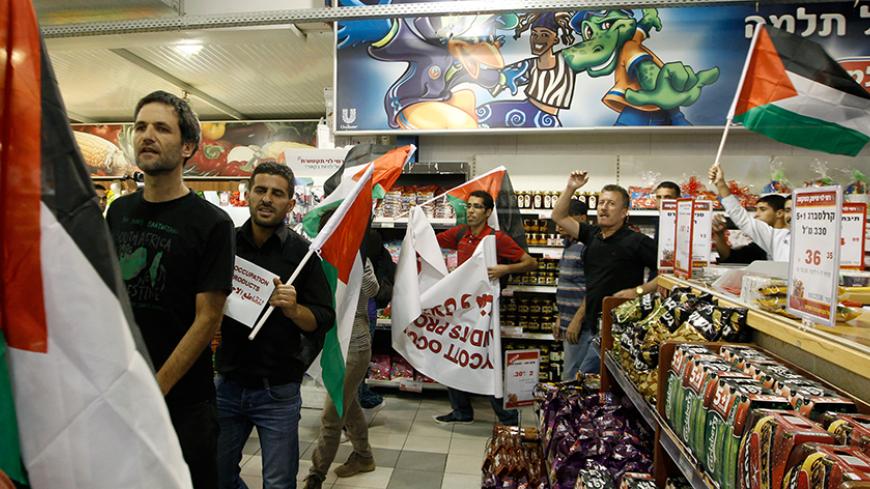 Foreign and Palestinian activists hold Palestinian flags as they march through a supermarket in the West Bank Jewish settlement of Modi'in Illit, Oct. 24, 2012. - REUTERS/Ammar Awad

The resolution passed on Nov. 11 by the European Commission to mark products originating beyond the Green Line — in the West Bank, East Jerusalem and the Golan Heights — has raised the fury of the Israeli government. Although the resolution was described by the Europeans as merely "technical," it is seen in Israel as reflecting the "boycott trend" against Israel.

Until summer 2015, Israeli decision-makers tended to play down the significance of the boycott, divestment and sanctions (BDS) movement against Israel, although it has been operating for over a decade now in the economic, cultural and academic arenas. The movement seeks to pressure Israel to end the "occupation of Arab lands," to recognize the rights of Palestinian refugees in accordance with UN Resolution 194 on the issue, and to act to ensure full equality for the Arab-Palestinian citizens of Israel.

A series of events in the international arena, above all the Palestinian bid to FIFA, the international federation of soccer associations, to suspend Israel from world soccer, as well as the statement by French telecom giant Orange CEO Stephane Richard on exiting the Israeli market, "convinced" the Israeli government that it is facing a "strategic threat" to the very existence of the state. In light of the emerging circumstances, Prime Minister Benjamin Netanyahu decided to implement a 2014 resolution to establish a special task force to fight the anti-Israeli sanctions. The task force, standing at some 100 million Israeli shekels (roughly $25.5 million) and covering 10 new job positions, was approved in June as part of the budget of the Ministry of Strategic Affairs headed by Minister Gilad Erdan.

Al-Monitor asked ministry officials for information on the issue, but they refused to divulge details on the plans of the new task force, instead noting on condition of anonymity that "it is expected to officially start operations only on Jan. 1, 2016." However, in early October, when the diplomatic-security Cabinet endorsed the establishment of a task force to combat the anti-Israeli boycott campaign as a new government office, it was reported that this office would operate on two levels: first, gathering both overt and covert information on the boycott organizations, inter alia through outsourcing, with the view of using the intelligence gathered to draw an updated picture of the activities of the sanctions movements and ultimately foiling them; and second, acting to thwart by legal measures the BDS activities.

Even before the new office managed to come up with any document on the boycott issue, it seems to have fallen victim to a political struggle that casts a heavy shadow on its ability to promote initiatives against the anti-Israeli boycott campaign. The Ministry of Defense, Ministry of Justice and Ministry of Foreign Affairs, which are supposed to cooperate with the new office, have voiced their opposition to its establishment. Thus, for example, according to the Defense Ministry, the Israel Defense Forces' Intelligence Corps is already engaged in operations against the BDS movement.

Knesset member Nachman Shai (Zionist Camp), who serves on the Knesset Foreign Affairs and Defense Committee, believes that in the absence of political backing, the new office established to fight the anti-Israeli boycott campaign will not be able to accomplish its goals. He told Al-Monitor, "To deal with the boycott movement, a top-level national government task force is called for, bringing together all relevant ministers. Such a task force should be subordinate to the prime minister himself, no less."

Shai added, "The Strategic Affairs Ministry, which is a small ministry with no real authority, cannot possibly organize all the related activities or guide the other bodies concerned on the preferred mode of action. What's needed is a single central entity empowered to outline the policy. That's the only way the boycott movement can be tackled."

While Shai sees no immediate threat to Israel from the boycott, he is concerned about the long-term potential of the boycott to harm Israel. "We have failed to produce a solution to stop this movement, slow as its progress may be. With time, the pressure exerted on Israel [by the BDS movement] will steadily increase."

Unlike the politicians, Israelis who have to actually deal with the consequences of the boycott are less concerned about the trend. They feel that the coverage it is given in the media exceeds its real effect on the ground. A senior figure in the Israeli business community told Al-Monitor on condition of anonymity, "The anti-Israeli boycott campaign has been in force for over a decade now. However, when looking at the value of Israeli exports, it turns out that, despite the boycott, the exports have actually grown. Without minimizing the significance of the export from Judea and Samaria, it accounts for but a minor share of total Israeli exports."

According to the senior business figure, the economic impact of the boycott is likely to be felt primarily in the consumer goods sector — cosmetics and food products that, under European Union regulations, have to carry a label designating their country of origin, whether they are manufactured in Israel or in any other country. He argues that the boycott incidences against Israeli products in Europe are marginal and localized, and that they apply specifically to products such as dates and spices from the Jordan Valley. Business owners in areas with a predominantly Muslim clientele simply refrain from putting any Israeli products on display. They know that the label ''made in Israel'' could provoke objection. But an Israeli water treatment system installed in a public building or an Israeli software would hardly be the cause of a consumers' boycott. The businessman said that at the same time, the demand for technology products, in which Israel specializes, continues to grow in Europe, North America and Southeast Asia. "Business is stronger than anything else. If you have a quality product to market at the right price and it is available for purchase, it will be exported — even if it is from Israel," he said.

Statements in the same vein have been made by professor David Newman, dean of the Faculty of Humanities and Social Sciences at Ben-Gurion University of the Negev. Over the last decade, British-born Newman has been closely following the BDS attempts to initiate an academic boycott of Israel. Speaking to Al-Monitor, he sounded quite determined, saying, "There is a media buzz generated by the boycott movement and it is certainly unpleasant. Yet the impact on research and academic cooperation between Israel and the United States and Europe is at best minimal. The way I see it, it is nonexistent."

However, Newman does not play down the potential damage due to the BDS activity. Indeed, he said that the boycott initiatives have recently been stepped up in the United States — far more so than in Europe. "These are initiatives by academic associations that recommend to their members to refrain from cooperation with Israel. There is no sweeping mandatory instruction," he emphasized.

As to the establishment of the new office to combat the boycott, Newman fears that it is a wrong and ineffective solution. He is also bothered by the possible evolvement of a "thriving industry" surrounding the BDS issue in the coming years, which would entail bloated government spending on offices, standards, conferences and travels abroad — all justified by waving the specter of anti-Semitism in the same breath. In his opinion, what is needed to consolidate the global academic relations of Israel is a simpler step — appointing a science attache from the academe for each of the major Israeli Embassies around the world.

It looks as if only now, a decade after the BDS launched its activity, has Israel found an answer to the anti-Israeli boycott movement — in the form of a dedicated office assigned to handle the issue. However, given the political opposition to the new body and the claims that what we witness here is more of "a boycott mood" than any effective boycott measures, it seems that the proposed office should perhaps form a part of a more comprehensive Israeli strategy that would primarily attempt to cope with the sources of the boycott and tackle it at the roots.