Why the PA is distancing itself from BDS movement

Israel must understand that the marginal BDS movement is not its main strategic threat — the occupation is. 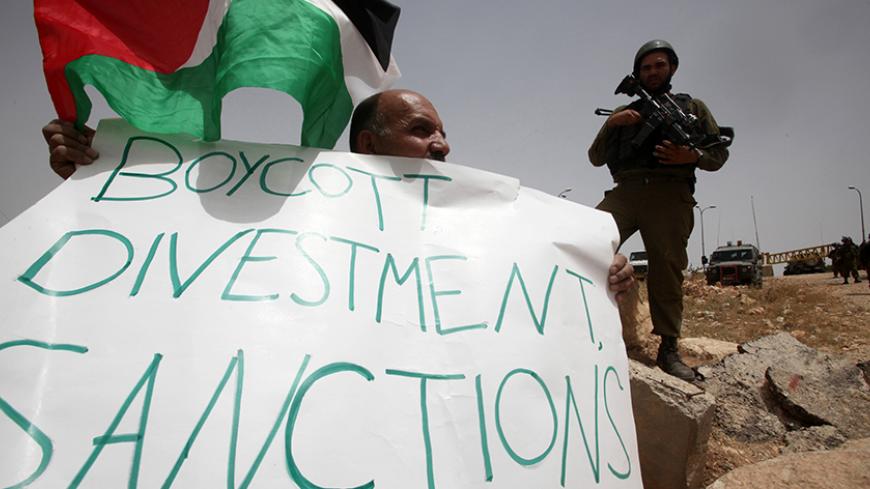 A Palestinian holds a placard reading "boycott, divestment, sanctions" as part of a protest near the Jewish settlement of Bat Ayin and the West Bank village of Surif, west of Hebron, June 8, 2013. - HAZEM BADER/AFP/Getty Images

While the boycott, divestment and sanctions (BDS) movement is viewed and described by the Netanyahu government as a strategic threat to Israel’s international legitimacy, in the Palestinian government, there is only lukewarm support for the movement.

A senior PLO official in charge of relations with Israeli civil society told Al-Monitor on condition of anonymity that the Palestinian Authority (PA) supports the BDS movement, but has been careful not to make it its own official policy. He claims that Israeli institutions being boycotted may indeed present a moral boost to many Palestinians, but in terms of the Israeli occupation policy, the real damage has so far been minimal. The policy of Palestinian President Mahmoud Abbas is to initiate dialogue with many segments of the Israeli public in favor of the Palestinian cause. “As long as our strategy is a peaceful one aimed at negotiating a two-state solution, we have to convince important parts of the Israeli constituency that a two-state solution is in their favor,” the PLO official said. “President Abbas has instructed us to follow a systematic policy aimed at affecting the hearts and minds of Israelis.”

According to the official, this policy includes several key elements, such as encouraging joint Palestinian-Israeli anti-settlement protests. Other important elements are organizing tours of the PA so Israelis can see firsthand Palestinian suffering from the occupation and exposing the Israeli public to Palestinian success stories such as the new West Bank town of Rawabi, hi-tech startups, Palestinian culture and so on. Establishing official Hebrew internet sites and a Hebrew radio station to inform Israelis about Palestinian lives and plights are another goal. In addition, Abbas encourages outreach to Israeli academia, businesses, youth groups, as well as to Israelis emanating from Arab countries, and cooperation between Palestinian and Israeli women’s groups.

The official told Al-Monitor that the PA’s efforts are bearing some fruit, and while the Israeli government actively seeks to destroy any eventuality of a two-state solution, the Israeli public is split in the middle. “Once most Israelis are confronted face to face with Palestinian life, they tend to moderate their voices on Palestinian statehood.” According to the official, these Israel-oriented policies are part of the Palestinian effort to end the occupation. These policies are not for normalizing relations with Israel; normalization could only take place after the creation of a Palestinian state on a border based on the 1967 lines with East Jerusalem as its capital. In the meantime, Palestinians would have much to gain from cooperating with Israeli civil society, he argued. Boycotting Israeli peace organizations and academic institutions would actually be counterproductive, the official said.

This Palestinian policy, unlike the BDS approach, differentiates between the occupying Israel and the part of Israel that supports a realistic two-state solution.

On the Israeli governmental side, one tends to exaggerate the strategic danger emanating from the BDS movement and takes for granted the PA’s policies of cooperation with Israeli civil society.

A senior Israeli Foreign Ministry official dealing with the Palestinian issue told Al-Monitor on condition of anonymity that Prime Minister Benjamin Netanyahu has prioritized the fight against BDS, both in policy and budget. Netanyahu sees it as an Arab move to delegitimize Israel — a process that in the West integrates anti-Semitic elements. The official also claimed that the Palestinian outreach to Israelis is driven by financial and economic motivations.

There are flaws in both the Palestinian and Israeli views of the relationship between the two sides.

The Palestinian leadership is right to reach out to Israelis. Israeli public opinion is of strategic importance in order to achieve Palestinian viable statehood. While the current government will not be convinced by these arguments — even if Abbas were to join the Likud movement — the mainstream Israeli public could indeed opt for a two-state solution on the condition of having a reliable security partner on the Palestinian side. Therefore, the Palestinians have little choice but to expose to the Israelis their successful security cooperation with Israel and the Fatah struggle against Hamas. This depends, to a large degree, on the rhetoric of the Palestinian leader, who should emphasize his moderate positions more forcefully to the Israeli public. This necessity of highlighting cooperation was in past years well understood by former President Anwar Sadat of Egypt and by King Hussein of Jordan, who expressed strong empathy with Israeli security concerns and its legitimacy.

As to the Israeli government, its approach to this issue is wrong. BDS is not the problem; the occupation is. BDS is an Arab platform for European radical leftists who are hostile to Israel or just critical of the occupation. It is not an effective boycott movement, as was the case with apartheid South Africa, and it generally alienates liberal Israeli institutions that are willing to cooperate with Palestinians. Most Israelis have little interest in it. The more effective anti-occupation movements are related to international governmental and nongovernmental efforts to boycott the settlements and label their goods. These campaigns emphasize the cost of occupation.

In continuing with its current policies, Israel risks not just boycotts by the West, It jeopardizes its international standing and its long-term relationships with the European Union. These policies even risk its relations with the United States. Hence, it is time for Israel to partner with the Palestinian leadership on a two-state solution based on the 1967 lines and to regain its place among nations.