Hamas' official visit to South Africa found support there and could open doors to relationships with other countries. 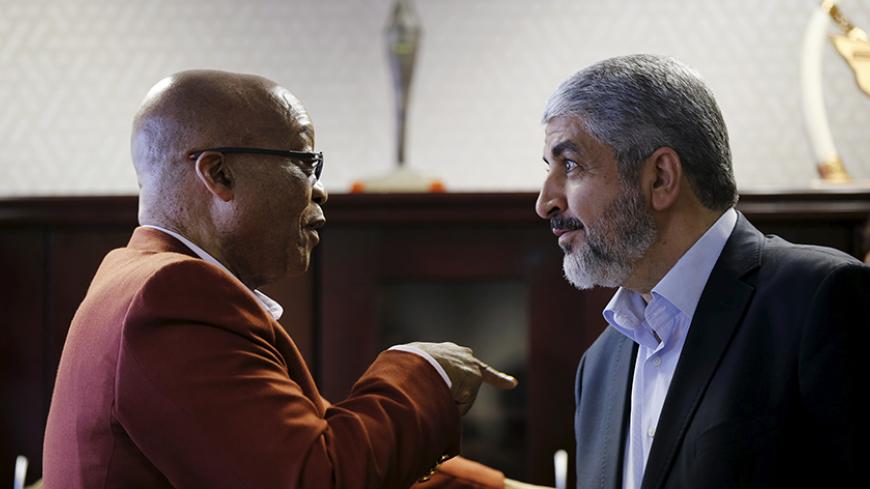 Hamas considers its official visit to South Africa earlier this month a success. The trip helped expand communications between the two, called attention to similarities between their struggles and could help Hamas pave the way for alliances elsewhere in its attempt to break the international blockade.

The Hamas delegation's visit was busy and conspicuous. The group was welcomed at the Johannesburg airport by African National Congress (ANC) Deputy Secretary-General Jessie Duarte. Khaled Meshaal, head of Hamas' political bureau, met with South African President Jacob Zuma, who signed a memorandum of understanding in support of the Palestinian cause. The delegation also met with members of the ruling ANC and South African organizations that support Palestine, such as Al-Aqsa Foundation of South Africa.

At a mosque in Pretoria, Meshaal compared the Palestinian cause with the struggle against apartheid in South Africa. Hamas’ visit concluded with a dinner attended by former South African President Kgalema Motlanthe.

While this trip drew a lot of attention, Hamas and South Africa are not strangers. Al Jazeera revealed Feb. 25 that in June 2012, the CIA had tried to open back channels with Hamas through South African intelligence services. Since there is no direct political contact between the US administration and Hamas — the movement has been on the US terrorist list since 2001 — the CIA sought to indirectly communicate with Hamas through South Africa, with whom the United States shares good relations, asking the latter to learn about Hamas’ stances.

On Aug. 23, 2014, Meshaal spoke with Zuma by phone during the Israeli war on Gaza and thanked him for supporting the Palestinians. Sulley Chrhola, the South African ambassador to the Palestinian Authority (PA), made repeated visits to Gaza to meet with Hamas leaders. On the last, on May 19, he declared he does not view Hamas as a terrorist organization. Sisa Ngombane, the former South African ambassador to Israel, also said recently that he does not consider Hamas a terrorist organization, but rather a national liberation movement. He went on to demand that Hamas renounce violence and look for ways to coexist with Israel.

Hamas' foreign relations chief Osama Hamdan, who is currently in Lebanon, told Al-Monitor, “There are many similarities between the Palestinian and the South African struggle" under an apartheid occupation. "The ties between both parties were first established in 1998 and then developed substantially. South Africa is keen on sharing its experience with the Palestinians in their confrontation against Israel, since South Africa is an example in managing a conflict against a racist entity.” In addition, Israel had close ties with the former apartheid regime in South Africa, as was obvious in the tight security coordination between the parties, military aid and cooperation in the nuclear field.

Accompanying Meshaal on Hamas' journey to South Africa were high-profile political bureau members Mousa Abu Marzouk, Sami Khater and Mohammad Nazal. Abu Marzouk, who resides in Qatar, told Al-Monitor, “Hamas' international relations are part of its struggle against the occupation and the Zionist movement, since the Palestinian cause has many true supporters and sincere allies, and Palestinians need tireless efforts to guide them and unite their efforts. This visit’s goal is to strengthen the bonds of cooperation between Hamas and the ANC and the people of South Africa to support the Palestinian cause.”

Naim Gina, president of the Middle East and Africa Studies Center in South Africa, told Al-Monitor that Hamas, after working to strengthen its relationship with Johannesburg, "is now able to open a representation office in South Africa.”

Yousef Rizqa, the former information minister in the Hamas government in Gaza, also talked with Al-Monitor about the importance of Hamas' trip.

“The visit at this time is a Hamas breakthrough in the international blockade and the US foreign policy and a slap in the face of the Israeli foreign policy. The timing is important in light of the third popular intifada, and Hamas is aware of and appreciates the importance of this visit. It considers it to be a positive step for foreign relations and it will do the Palestinian cause good,” he said.

Hamas seems to need this openness with world capitals, especially Johannesburg, in light of the blockade imposed by many countries — especially Israel, the United States and Egypt — under the pretext that Hamas is a terrorist movement. Hamas' political relations with old allies such as Iran and Syria have declined despite improvement in its relations with Saudi Arabia and the strength of its alliance with Qatar and Turkey.

The Hamas visit angered Israel, whose foreign affairs minister summoned the assistant ambassador of South Africa to Tel Aviv Oct. 19 to make its strong objection clear. Israel's action then prompted Mahmoud al-Zahar, a member of Hamas’ political bureau, to state Oct. 21 that Israel protested the Hamas visit because it means recognition of the resistance’s legitimacy.

It should be noted that Israel's relationship with South Africa is not at its best. In April, Israel refused to allow South African Minister of Higher Education and Training Blade Nzimande to visit Ramallah. On Oct. 14, the ANC in South Africa advised its members and its leaders not to visit Israel.

While Israel expressed its anger over Hamas’ visit to South Africa, the PA remained silent. A senior Palestinian official in Ramallah told Al-Monitor on condition of anonymity, “The PA learned of the arrangements for the visit in advance from some international bodies, following the improvement of Hamas’ ties with Johannesburg in recent years. Hamas’ visit may be a prelude to other visits to the African continent, given the large influence South Africa has on the African continent.”

Raafat Morra, a Hamas media official in Lebanon, told Al-Monitor that Hamas’ visit to South Africa “led to important political results" and improved communications. "Many meetings were previously held, and official communication took place between South African and Hamas officials and party leaders, whose details and dates were not disclosed. Such an official visit is proof of Hamas’ power and regional presence, and it represents the beginning of breaking the international boycott.”

Hamas said it does not expect financial or military support from South Africa. Although Hamas has yet to announce concrete results from this visit, it seems likely it will build on this success by visiting other countries in an attempt to expand its alliances and relations and become immune to blackmail or pressure from other sources.