Who is Israel commemorating at Holocaust remembrance event?

Israeli and Jewish politicians and wheeler-dealers are turning Holocaust remembrance events into a political mingling arena. 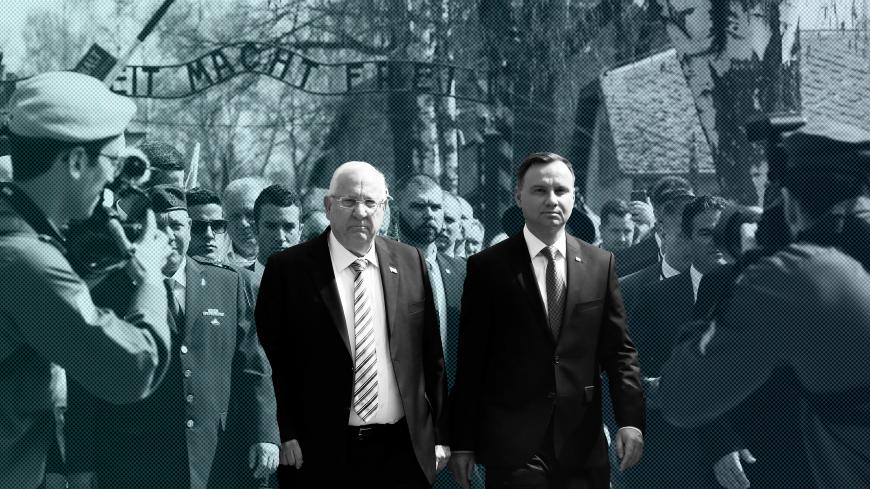 Polish President Andrzej Duda and Israeli President Reuven Rivlin are seen in front of the "Arbeit macht frei" (Work sets you free) gate as they take part in the annual "March of the Living" to commemorate the Holocaust at the former Nazi death camp Auschwitz, Oswiecim, Poland, April 12, 2018. - REUTERS/Kacper Pempel

Scheduling an event on a date convenient for dozens of world leaders is no easy matter. Presumably, the president of the European Jewish Congress, Russian billionaire Moshe Kantor, who instigated and funded the Jan. 23 event in Jerusalem marking the 75th anniversary of the Auschwitz death camp liberation, carefully checked the calendars of all the invitees. Kantor is reportedly close to Russian President Vladimir Putin. A man like him, whose business interests span the globe, must have been aware that on the Jan. 23 date he proposed to the relevant Israeli parties — the Yad Vashem Holocaust Memorial, the president, the prime minister and the Foreign Ministry — the world’s top economic and political leadership would be convening in Switzerland at the annual conference of the Davos Forum. And after all, the liberation occurred Jan. 27, 1945.

Speaking with Al-Monitor, an Israeli diplomat suggested that Putin tasked Kantor with upstaging the Davos Forum in a bid to humiliate Polish President Andrzej Duda. The ceremony, scheduled for International Holocaust Remembrance Day Jan. 27 at the site of the death camp in Poland, will fall far short of the pomp and circumstance of the Jerusalem event. A significant part of the scenario for the Jerusalem 2020 event is an adaptation of the central commemoration event that marked the 70th anniversary of the Auschwitz-Birkenau liberation and was held at the camp site in January 2015. Participants at that ceremony, too, included dozens of heads of state and ministers, but Putin was the leader most conspicuously absent from the event.

The Russian boycott at the time, in 2015, stemmed from Putin’s anger at what he regarded as the demeaning representation of the Red Army’s role in the narrative of the Auschwitz liberation. Putin accuses Poland of collaborating with the Nazis during World War II, and this time it is Duda’s turn to boycott the memorial ceremony and turn the Holocaust remembrance events into a boxing ring. In a Jan. 20 interview with Israel’s public broadcaster, on the eve of the Jerusalem event, Duda accused Putin of spreading lies to conceal the Soviet Union’s responsibility for the war along with Nazi Germany’s. He also took the opportunity to reiterate his demand that Israeli Foreign Minister Israel Katz apologize for saying in February 2019 that the Polish people “suckled anti-Semitism with their mothers’ milk.” The decision to honor Putin with the delivery of a speech at the Jerusalem ceremony, while the organizers turned down Duda’s request to speak at the event and he decided to stay home, further lowered the already chilly temperature between Warsaw and Jerusalem.

Journalist Anshel Pfeffer exposed in a January 2016 Haaretz piece how Kantor is making political use of his title as “president of the European Jewish Congress.” According to the article, during Kantor’s eight-year presidency, the organization warned of anti-Semitism in countries that Putin viewed as enemies, especially in Western Europe and Ukraine. At the same time, it praised the Kremlin for waging war on anti-Semitism within Russia. European Jewish activists have also expressed reservations that the leader of the organization that is supposed to represent European Jewry is not a citizen of the European Union.

There is another important difference between the current event and the one held five years ago at Auschwitz. Organizers there invited hundreds of Holocaust survivors to celebrate their salvation. This time, most of the people invited are diplomatic and political figures, while only a handful of Holocaust survivors received invitations to the ceremony commemorating the liberation of the camp where they themselves were imprisoned. When Minister Ze’ev Elkin of the Likud found out about this shameful situation, he said he had decided to transfer his invitation to a survivor who had not been invited and called on his fellow Cabinet ministers to do the same. Only two Likud ministers (Science Minister Ofir Akunis and Justice Minister Amir Ohana) responded to his appeal. And what about the others? With all due respect to the 100,000 Holocaust survivors living in Israel, the other ministers think it is more important to survive the current caretaker government and ensure their seat in the next one. The appointer of these ministers, Prime Minister Benjamin Netanyahu, makes a point of honoring philanthropists such as Kantor.

Kantor is not only close to Putin. Five years prior to accompanying the Russian leader on a 2017 visit to Israel, Kantor contributed 40,000 Israeli shekels ($11,556) to Netanyahu’s campaign for the Likud leadership primaries (against Moshe Feiglin). These days, as Israel heads for elections once again, it is especially important to stay on the good side of a Jew who enjoys access to the czar. What is more, Kantor’s Jewish leadership rival, the World Jewish Congress president, billionaire Ron Lauder, has made no bones about his disappointment with Netanyahu’s policies and has stopped writing checks to his one-time friend.

Putin also holds the keys to the jail cell of Naama Issachar, the young Israeli woman jailed in Russia on charges of drug smuggling, who has become the Netanyahu family’s newly adopted daughter, in a manner of speaking. Not a day goes by that family members do not tweet about her case. The Netanyahu family hasn't lavished such concern on a family since soldier Elor Azaria was jailed for shooting an injured Palestinian assailant.

This week, Kantor will stand alongside Putin in Jerusalem. Next week, his rival, Lauder, will take his place next to Duda at Auschwitz. Rather than unifying the international community around the memory of the horrors and the scourge of racism and anti-Semitism, the Holocaust is turning into a game ball in the hands of Jewish and Israeli politicos. Nothing symbolizes this disrespect more than the invitations sent out by Jerusalem Mayor Moshe Leon for a “one-of-a-kind party,” an oriental dinner of the “World Holocaust Forum” and an after-party. It is easy to imagine the furor in Jerusalem had the mayor of Warsaw invited guests of the Holocaust Remembrance Day event at Auschwitz to a Polish dinner and an after-party.