The upcoming visit of Russian President Vladimir Putin, his participation in the ceremony commemorating 75 years to the liberation of Auschwitz and his inauguration of the monument commemorating the Leningrad blockade stir up mixed emotions. 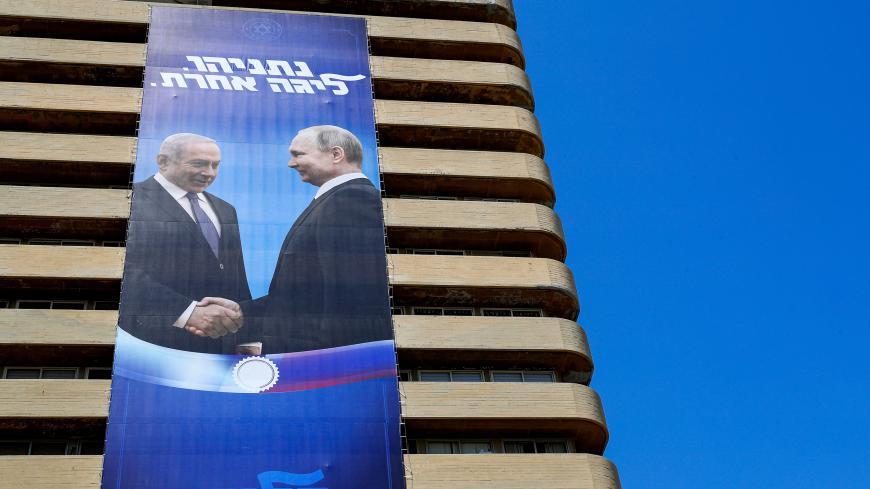 The Israeli establishment is making a huge deal out of the high-level visit of Russian President Vladimir Putin to Israel. The family of Naama Issachar, who is imprisoned in Russia, is expecting the president to bring her with him, or at least to announce that she will soon be released from prison. The 1,300 Israelis who survived the siege of Leningrad during World War II hope that he will take part in the dedication of the new monument in Jerusalem to commemorate the many hundreds of thousands of people who did not survive the siege. In contrast, opponents of the Putin regime are still debating whether to demonstrate against him.

On the morning of Jan. 23, Putin’s plane will land in Israel to participate in a special event at the Yad Vashem - World Holocaust Remembrance Center to mark the 75th anniversary of the liberation of the Auschwitz-Birkenau death camp. It will be Putin’s third visit to Israel. His first official visit was in 2005, during which Israel and Russia signed numerous agreements between them. Then, in 2012, he returned to Israel for a second visit to dedicate a monument in Netanya commemorating the many victims of the “Great Patriotic War,” as Russians refer to their battle against Nazi Germany during World War II. Putin’s current visit also comes in the context of that war, but now it also comes in the heat of a war of competing narratives concerning the role of the Soviet Union and other European nations, such as Poland, in that war. Still, there wasn’t much of a commotion in Israel in response to the decision by Polish President Andrzej Duda to boycott the ceremony at Yad Vashem after being informed that he would not be given an opportunity to speak at the event. Nor was there much of a reaction to the exchange of accusations between Duda and Putin, who said that, “Stalin never shook hands with Hitler,” and claimed that Poland’s wartime ambassador to Germany proposed to erect a statue of Hitler in Warsaw.

Israel is home to thousands of veterans who fought in the Great Patriotic War and World War II. In 2018, the Knesset passed a law establishing the anniversary of the Allied victory over Nazi Germany as a national holiday on May 9. Nevertheless, few people in Israel show any interest in the wartime relationship between the world powers or in the warring narratives between Russia and Poland. The exception to this is Russian-speaking Israelis, who immigrated to Israel from the former Soviet Union and the Commonwealth of Independent States.

Originally, Putin’s visit was planned to include his participation in the dedication of the memorial to the victims of the siege of Leningrad, but because of a change to his timetable it is now unclear whether that will happen or not. The monument was the dream of immigrants who survived that terrible siege, which lasted 872 days. It gained momentum in 2016, when partners were found in the St. Petersburg government to advance the project, and donors — particularly the Euro-Asian Jewish Congress — were also enlisted. At the time, it was decided that the monument would be erected near the president’s official residence in Jerusalem. “The monument is intended to commemorate the heroism of the Red Army and the residents of Leningrad who fought against the Nazis, including the 70,000 Jewish fighters who fell during the siege,” former Knesset member Leon Litinetsky explained in February 2019. Litinetsky now heads the Israeli branch of the Coordinating Council of Russian Immigrants, an umbrella organization serving Russian emigrants around the world.

Emilia Larina, 80, heads the Israeli organization representing survivors of the siege. She told Al-Monitor that she believes the creation of this memorial is of supreme importance, not only to commemorate the victims, but also as a tribute to those who succeeded in repelling the Nazis and liberating Leningrad. “Israel is now home to some 1,300 people who survived the siege of Leningrad,” she said. “Most of them were born in the 1930s. For them, creating this monument is akin to leaving a spiritual legacy to their children and grandchildren. I hope that they [the children and grandchildren] will come to visit this monument, express interest in our history and learn about what happened in our city during those terrible years. The Nazis occupied the city of Pushkin and wiped out the entire Jewish population. Everyone knew that if Leningrad fell into their hands too its 200,000 Jews would also be annihilated. I would be very pleased to have Putin in attendance at the [monument’s] dedication ceremony, but even if he doesn’t, I am still glad that we now have our legacy commemorated like this.”

Not everyone shares this opinion. On Jan. 16, Svetlana Tkachuk, for instance, wrote a scathing post on her Facebook page (post not publicly available) about Putin’s impending visit, particularly in the context of several historical incidents during the siege that are less known to the general public. “Putin will be arriving here on Thursday for the dedication of the monument to the victims of the siege, among other things,” she wrote. “It is the height of a two-faced cynicism that the person doing this is a KGB agent from St. Petersburg, and particularly the idea of him doing this in Jerusalem. Historians living here know more about the real siege [than him], while the average citizen knows nothing. It’s disgusting.” The link that she attached to her post included chilling testimonies about the siege and the behavior of the Soviet regime at the time, which continued to arrest citizens deemed “un-loyal,” and did not do enough to help the people of Leningrad, who were dying of hunger.

Similarly, there is considerable debate surrounding the release of Issachar, who has been imprisoned in Russia since April 2019 on drug smuggling charges. While some people hope to see her freed from prison and are willing to give Putin full credit if he announces her release during his visit, others are convinced that soft-spoken diplomacy will not be enough to bring her home.

On Jan. 19, Issachar’s mother, Yaffa Issachar, called on the public to cancel all the protests planned for Putin’s arrival in Israel. She claimed that the situation remains very sensitive, and that she would like to respect the Russian president, who holds the keys to her daughter’s release. This comes in response to a report Jan. 16 on the Russian Komnersant news site that Putin may soon pardon Issachar. The release of this news set Israel on edge and offered fresh hope to everyone who wants to see her released after being sentenced to 7½ years in a Russian prison for a relatively minor crime. According to most recent publications, Putin and Prime Minister Benjamin Netanyahu will discuss during the visit possibilities for pardoning Issachar.

If anyone is happy to take credit for Putin's visit to Israel — and the many other world leaders who will participate in the ceremony at Yad Vashem — it is Netanyahu of course. He will take credit for it even if there can be no doubt that all the prime ministers, presidents and royals arriving in Israel for this important occasion would have come anyway, regardless of who occupies the prime minister’s office. But that aside, the very fact that this event is taking place less than two months before another round of elections (scheduled for March 2) will certainly benefit Netanyahu’s campaign.