Israelis are not really aware of the heroism demonstrated by thousands of World War II veterans who immigrated to the country from Russia in the 1990s. 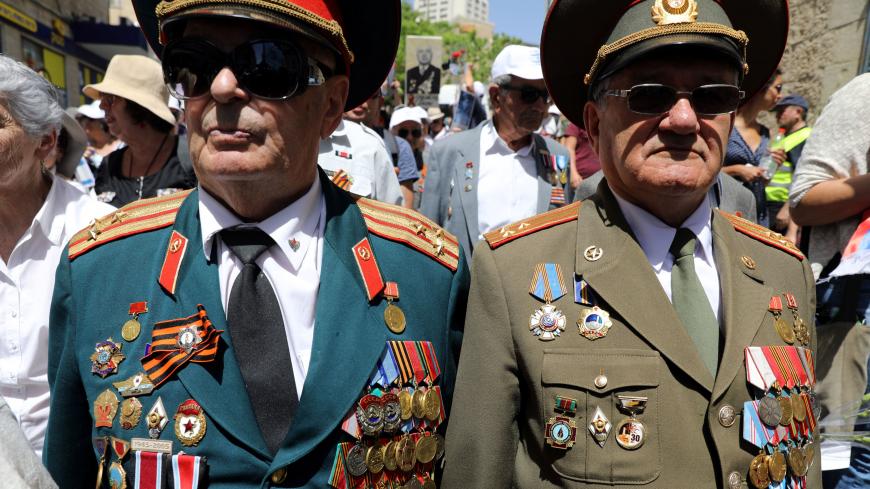 Efraim Paperny, 94, a veteran of the Second World War, will participate this week in the victory parade in Jerusalem and in a special event hosted by the Knesset to celebrate the May 9 victory over Nazi Germany. He has done so every year since he immigrated to Israel in 1990. Paperny was born in the city of Chernigov in 1925. He joined the Red Army at the age of 16, served in the Communications Corps for four years, and took part — and was wounded — in the liberation of Vienna in 1945. In Israel, he became president of the Organization of Soldiers and Partisans Wounded in the War against the Nazis. In 2010, he and his former brothers in arms received Russian help to establish the Museum of Jewish Heroism during World War II in the city of Ashdod.

The little museum features hundreds of valuable and meaningful items, including the uniform of a soldier in the Red Army during the war, letters from the front, dining utensils, weapons and photos of young Jewish soldiers who fought in the Red Army, including Paperny. Dozens of Israeli school and student groups visit the museum every year, along with young people from overseas.

At first, longtime Israelis watched in awe as elderly men and women decked out in Red Army uniforms and with dozens of medals on their chests marched past. The Israelis had no idea what was going on. The sun beat down on the veterans as they marched in formation, sang songs in Russian from that war and recalled the fierce battles, the horrors they had seen and the friends and family who died.

There have been many more victory parades since. They have become an integral part of the calendar in many Israeli cities, including Haifa and Ashdod. Marching with the veterans are their families, including children and grandchildren, who take great pride in their grandparents’ legacy.

“Israel should be grateful to all those who fought against Hitler. About 1½ million Jews fought in the Allied armies. Some 500,000 Jews fought in the Red Army,” Paperny told Al-Monitor. “When we were in the army, we didn’t feel any anti-Semitism. When you are in the trenches, the bullets don’t distinguish between Jews and non-Jews. Still, we were well aware of what was happening back home. And we knew that Jews were being slaughtered by the Nazis. We were fighting for our home, which was on fire.’’

The Victory Monument (often referred to as "The Wings") marking the Red Army's triumph over the Nazis was unveiled in Netanya in 2012. In just a few weeks, a statue will be unveiled in Jerusalem to commemorate the siege of Leningrad. Russian President Vladimir Putin has promised to visit the country and take part in the official dedication of the statue. In 2018, the Knesset passed the Liberation Day and Day of Rescue from Nazi Germany Law, which requires that the anniversary of the Allied forces’ victory be marked with an official ceremony at the Western Wall.

Despite this official recognition, the statues and the parades, very few schools in Israel teach the significance of this holiday. Many native Israelis are not even aware that this day of commemoration exists. It seems as if May 9 has not entered the pantheon of Israeli holidays. Instead, it remains a sectoral holiday only. Paperny said the day is still observed mainly by immigrants from the former Soviet Union. He said he would like to see the state invest more effort so that schools teach about this victory day and about the contributions of Jews who fought in the Red Army.

Vlad Kapostin, a member of the Immigration and Absorption Committee in Rishon LeTzion, fought for years to get his city to hold a victory parade. While the city finally began the tradition two years ago, Kapostin is upset that it doesn’t include a fireworks show, as it does in Russia. Kapostin told Al-Monitor that although he has no relatives who fought in that war, he grew up in its shadow, like so many Russian immigrants and their children. He also said much more should be done to expose Israelis to this day of commemoration.

“Without that victory over Germany on May 9, our country would not exist,” he says. “Every one of us is alive because of those heroes who fought the Nazis. We must give them the respect they deserve and recognize their heroism.”

Dr. Leah Kahanov immigrated to Israel at the age of 8. She also believes that it is important for Israeli schools to teach the history of World War II and the great danger that the world faced. “I don’t take part in parades,’’ she told Al-Monitor, “but the memory of what happened must be preserved, even after the last of the veterans is gone. This is the history of all of us.”

It has become a custom of many participants in these parades to carry photos of relatives who died. These processions, which have come to be known as the Immortal Regiment, began in Russia but spread to other places around the world that mark the victory over Nazi Germany on May 9. Many veterans have already died, while others are now in their 90s and no longer able to march. This initiative offers an opportunity to perpetuate the memory of the fighters and, at the very least, share their images in the victory parades. Some of the marchers will also wear a black and orange ribbon. Over the last few years, this ribbon has just about become compulsory in victory parades taking place in Russia. Last year, when Prime Minister Benjamin Netanyahu marched in the victory parade in Moscow alongside President Vladimir Putin, he wore a black and orange ribbon on his lapel. Quite a few Israelis from the former Soviet Union noticed this little detail and interpreted it as a sign that the relationship between Moscow and Jerusalem was getting significantly closer.

Israel’s Arab sector also marks May 9 as a day of commemoration. Many Israeli Arabs who studied in the Soviet Union or the Commonwealth of Independent States married Russian women. They tend to mark the occasion in a restaurant or an events hall in Haifa, singing war songs in Russian and raising a toast to the memory of the fallen. In addition, the Israeli Communist Party holds an annual memorial event in the Red Army Forest in Abu Ghosh.

This year, a victory parade and a procession by the Immortal Regiment will also take place in the town of Bethlehem in the West Bank. As in the Israeli-Arab sector, the participants in the parade will consist mostly of Russian women with their Palestinian husbands who once studied in the Soviet Union or Commonwealth of Independent States. Surprisingly, the anniversary of the victory over Nazi Germany and the common traditions associated with it unite very different people, Israelis and Palestinians, from both sides of the border.