The Russian Red Army's victory over Nazi Germany in World War II still beats proudly in the hearts of Russians, which is why Moscow sought to mark the liberation of the Auschwitz concentration camp on its own terms in Jerusalem. 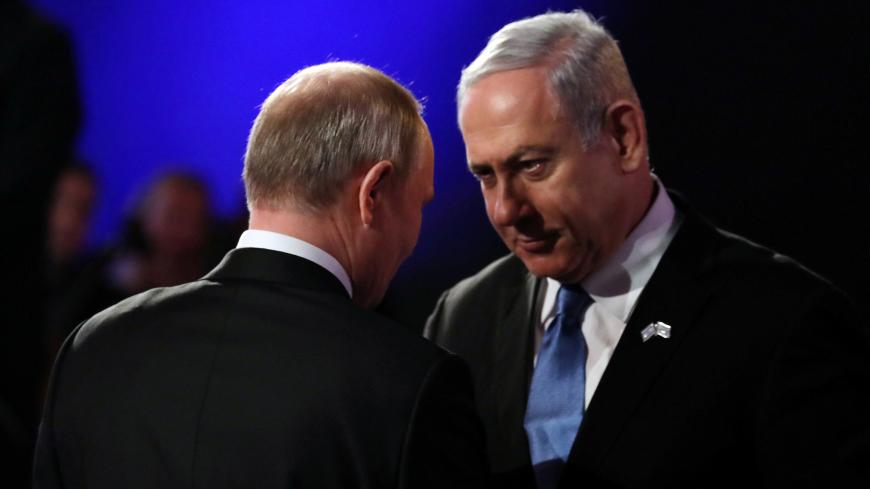 Even before the presidential plane of Russian leader Vladimir Putin landed at Ben Gurion Airport on Jan. 23, everyone in Israel knew he was the most powerful and influential leader invited to attend the stately event to mark 75 years since the liberation of the Auschwitz-Birkenau death camp by the Russian Red Army. It was no wonder that as far as Israelis were concerned, Putin overshadowed any other leader to grace the Fifth World Holocaust Forum with his presence.

Everyone knew that Putin not only holds the key to the fate of the young Israeli Naama Issachar, who received a disproportionate prison sentence in Russia for smuggling drugs. He also has a say in Israel’s activity in the skies over Syria. Nevertheless, very few Israelis were aware of or had dwelt on one important point: Putin had come to Israel to participate in an event initiated, funded and produced by his close friend and confidante Viatcheslav Moshe Kantor, a Russian Jewish oligarch and chairman of the European Jewish Congress. Nothing about this event, which could easily be called a “Russian event,” happened by chance.

Every year on Jan. 27, the international anniversary of the liberation of Auschwitz-Birkenau, Poland hosts memorial events that include Holocaust survivors, dignitaries, world leaders and senior delegations from Israel. In 2014, for example, four years before the so-called Holocaust Law sparked controversy in Israel and Poland by making it a criminal offense to accuse Poland of complicity in Nazi war crimes, an Israeli delegation of 60 Knesset members and dozens of Holocaust survivors had taken part in a ceremony in Auschwitz. The two countries have had a rocky relationship since then because of the problematic law as well as a series of statements by senior Polish and Israeli officials. Similarly, the relationship between Poland and Russia devolved to a low point as a result of a dispute between the two countries' leaders over their historical narratives of World War II.

In January 2015, when the World Jewish Congress, then headed by Ron Lauder, held an event to mark the 70th anniversary of the liberation of Auschwitz, the Russian president did not participate. His office claimed that he had not been invited. At around the same time as the event at the death camp, the European Jewish Congress, led by Kantor, held an alternative event also devoted to liberation, but few national leaders took part.

By 2020, lessons had been learned, and the event held in Israel, initiated by Kantor, was an overwhelming success. In actuality, it can be said that Israel served as the platform for the war of narratives on very different scales: internationally, with the involvement of Russian and the European nations, and via the international Jewish community, with the heads of competing Jewish organizations shaping narratives of their own and influencing global political arenas.

Skilled politicians are well aware of how to exploit painful events, such as terrorist and anti-Semitic incidents, to push a political message. Thus, after the 2015 attack on the Hypercacher supermarket in France, Israeli Prime Minister Benjamin Netanyahu expressed his hope that French Jews would immigrate to Israel. His remarks evoked angry responses in France. One year later, Putin suggested that the Jews of Europe should leave their homes due to increasing anti-Semitism and immigrate to Russia. The more anti-Semitic events in France, Belgium, Germany or Ukraine, the more extensive and in-depth coverage they receive by Russian media.

Kantor refers to this frequently, when he quotes disturbing figures from Anti-Semitism Worldwide, the annual report produced by the Kantor Center for the Study of Modern European Jewry at Tel Aviv University in conjunction with the European Jewish Congress. On many occasions, Kantor will emphasize that the situation in Russia is so much better, while his personal website features the 2017 article “There Is No Anti-Semitism in Russia.” In contrast, surveys conducted by the Anti-Defamation League actually show that there has been a rise in anti-Semitism in several countries in Europe, including Russia.

Nevertheless, there can be no doubt that anti-Semitic remarks by senior officials, “Jewish” jokes frequently heard in the Russian media and conspiracy theories about Jewish plots to conquer the world pale in comparison to terrorist attacks against Jews and Jewish institutions in Europe and the United States. Herein lies the source of an effort to exploit the rise of anti-Semitism in Europe in general and Ukraine in particular. It plays into Russia’s hands, especially when Ukraine names the main squares of its cities after historical figures involved in the massacre of Jews or other anti-Semitic actions in the war of narratives. In many ways, the Red Army’s victory over Nazi German and the enormous sacrifice of the Soviet Union, which paid for that victory with 27 million lives, including some 2 million Jews, continue to define modern Russia.

After the Soviet Union broke apart, the new Russia needed an ideology to replace communism. The church failed to rise to the occasion and reclaim the prestige it had enjoyed until the Bolshevik Revolution of 1917. In the 29 years since the fall of the Soviet Union, only one banner has been found to rally and unite the people: The great victory over Germany still beats proudly in the hearts of everyone who lives in Russia or who emigrated from the former Soviet Union and the Commonwealth of Independent States. There is not a single family that escaped suffering during that war. Not one family avoided paying for that victory with the blood of its loved ones, whether they marched on Berlin, died on the battlefields of Kursk and Stalingrad, burned together with their villages or died of starvation during the terrible siege of Leningrad.

The issue is an emotional one. It is also significant. That is why it plays such an important role in the ideology of modern Russia. It is easy to appeal to the emotions of the masses, when Europe is destroying monuments to the troops who fought in the Red Army, when Hollywood ignores the achievements and heroism of those same troops, when European leaders declare that it was Ukrainian and not Russian soldiers who liberated Auschwitz even though there is no historical basis for that claim.

Russia is trying to impose the lessons of the past — those learned during the Great Patriotic War and the Red Army’s tremendous victory — on what is happening in Europe today. In the Russian version of events, it’s a battle pitting good against evil, the people who fought against fascism against the heirs of the Nazi legacy and the defenders of minorities against anti-Semitism. That is the source of Russia’s desire to mark the liberation of Auschwitz on its own terms and not those of the hated Poles. It wants to celebrate the establishment of a monument in Jerusalem to commemorate the victims of the siege of Leningrad — the only such monument outside the borders of the former Soviet Union — without the criticism and icy glares of those who critique Russia’s policies night and day. Israel was a convenient platform for this. Not only had Netanyahu recognized Russia’s longing for recognition and its desire to promote its own narrative, he had even marched with Putin in Red Square during the 2016 Victory Day parade. The event to mark the 75th anniversary of the liberation of Auschwitz constituted the continuation of the march those two leaders began together at that time.