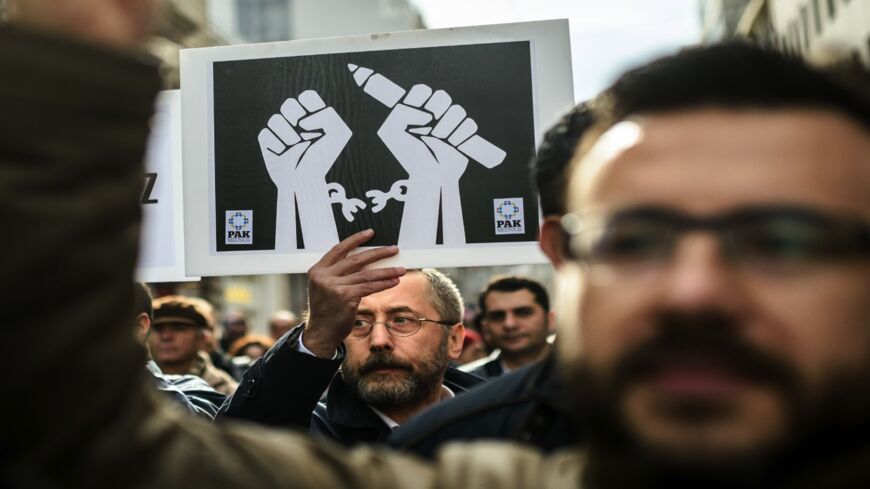 Journalists shout slogans and hold placards on Jan. 10, 2016, during a march marking Journalism Day on Istiklal Avenue in Istanbul, as they protest the imprisonment of journalists. Reporters Without Borders (Reporters Sans Frontieres) has ranked Turkey 149th out of 180 in its 2015 press freedom index in October, warning of a "dangerous surge in censorship." - OZAN KOSE/AFP via Getty Images

ISTANBUL — The first 10 days of 2022 got off to a typically busy start for Turkey’s journalists with news of record inflation and growing discussion about possible early elections.

But amid the frenetic news cycle were reports of developments that have become all too familiar to the country’s media workers.

By the time politicians were tweeting their congratulations on Working Journalists Day on Jan. 10, Turkish courts had sentenced a cameraman to life in prison for allegedly “disrupting the unity and integrity of the state” and passed a 15-month suspended jail term for another journalist for allegedly engaging in terrorist propaganda.

Meanwhile, Nazan Sala, the reporter who received the suspended sentence, and four other journalists were acquitted of belonging to a terrorist organization by a court in the eastern city of Van.

They had spent six months in prison awaiting trial after reporting allegations that soldiers had thrown two villagers from a helicopter in September 2020. One of the men later died.

In its 2021 report, the US-based Committee to Protect Journalists (CPJ) said Turkey had shifted from being the world’s second-worst jailer of journalists in 2020 to sixth place after 20 were released, leaving 18 still behind bars.

The lower numbers, however, did not show a change of attitude toward the media, the CPJ said. The crackdown that followed a failed coup in 2016 had “effectively eradicated” the media and led to many leaving the profession. More defendants are also free and awaiting trial or appeal.

Turkey’s Progressive Journalists Association (CGD) recorded 179 legal cases against journalists last year, with 219 media members put on trial. The association also said 75 journalists were physically assaulted during the course of their work in 2021.

Ozge Mumcu Aybars, founder and board member of the Ugur Mumcu Investigative Journalism Foundation, said the hostile media environment had led many journalists to self-censor their work to avoid dismissal or legal action.

“Freedom of media and the freedom of journalists are the most crucial parts of a functioning democracy,” she said.

“The international community should support quality journalism for a better future for democracy in Turkey [while] Turkish journalist NGOs and the independent media are doing their best to support journalism under these severe conditions.”

The situation is reflected in Turkey’s position in Reporters Without Borders’ 2021 World Press Freedom Index, which places it 153rd out of 180 countries.

The chilling atmosphere faced by individuals is echoed in the penalties handed out to independent broadcasters, newspapers and online publishers in a media landscape dominated by government-friendly outlets.

Most of the broadcasters punished were outlets with limited budgets, the CGD said, and the penalties often followed the airing of opposition voices.

Newspapers not controlled by the government face advertising blocks from the Press Advertisement Institution (BIK), usually in response to alleged breaches of media ethics.

The institute, which hands out advertising from the public sector, was brought under the direct control of the government’s Communications Directorate in 2018 and two years later distributed advertising worth 416 million liras.

“If you look at the punishments or fines RTUK made last year, they’re mostly opposition or anti-government media outlets,” he said. “There’s no proportionality.”

Saka added, “BIK is very significant for small outlets like Evrensel (a newspaper) or local dailies and news outlets. The public notices it allocates are a major source of income for small outlets.

“Now this money is mostly channeled to pro-government outlets, which is a restructuring of local media. Apart from a few cities, there is no local media that can really finance itself without public funds, so in this sense BIK is a very powerful tool.”

In a rare decision, the Constitutional Court last week ruled that blocking access to the pages of five news websites and the article of a journalist was a breach of freedom of expression. The court ordered payment of 8,100 liras, or $585, in damages and legal costs to each claimant.

CGD president Can Guleryuzlu said the government had “put pressure on critical journalists through regulatory public institutions related to the written and visual press while taking control of the capital structure of the media.”

With elections due by June 2023 at the latest, many anticipate the government’s grip on the media sector will tighten.

Further regulation of social media is in the pipeline, with the Communications Directorate stressing the need to combat “disinformation.”

“They’re appropriating this term and using it against critical circles, and that might be the kind of language they will use against independent online outlets,” Saka said.

Meanwhile, Guleryuzlu said he expected “intense manipulation” of the media during the campaign while “attempts to silence journalists and media outlets that criticize the practices of power … will continue in the upcoming general elections, which we expect to be contentious.”