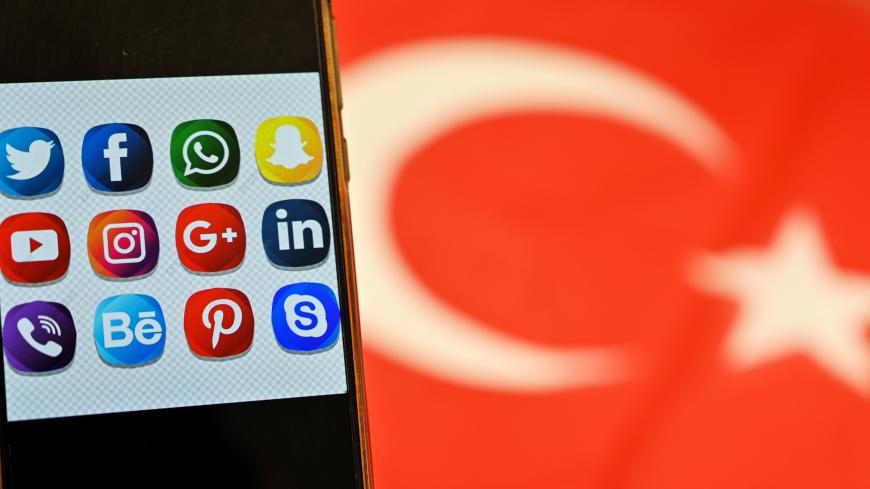 This picture taken on Sept. 30, 2020, shows the logos of social networking websites displayed on a mobile phone's screen in Istanbul. - OZAN KOSE/AFP via Getty Images

The decision, announced Tuesday, comes after the social media platforms refrained from appointing local representatives to handle government requests, as required by a social media bill passed in July 2020.

Effective since October, the law compels platforms with more than one million users to store data locally and fulfill content removal requests or face penalties, including fines and bandwidth restrictions rendering them inaccessible in Turkey. Representatives from both Twitter and Pinterest did not immediately reply to requests for comment regarding the advertising ban.

To date, Dailymotion, LinkedIn, TikTok, VKontakte and YouTube have fulfilled the law’s requirements, with Facebook agreeing Monday to appoint a local representative. Turkey’s Transport and Infrastructure Deputy Minister Omer Fatih Sayan outlined the law’s proceedings on Twitter Tuesday, saying the advertisement ban would be monitored by a number of Turkish regulators.

“We hope that Twitter and Pinterest, which still have not notified us of their representatives, will take the necessary steps immediately,” Sayan tweeted.

He added, “We will never allow digital fascism and the disregard of rules to prevail in Turkey,” echoing phrases previously used by Turkish President Recep Tayyip Erdogan, who campaigned for the social media law after his daughter, Esra Albayrak, became a target of online harassment last year.

Yet digital rights advocates warn such restrictions — imposed under a judiciary lacking independence — could facilitate online censorship on social media platforms that serve as alternative information sources in a country where the majority of mainstream news outlets are run by the state or government-friendly corporations.

After initially refraining from appointing a local representative, Facebook announced Monday it would begin “the process of appointing a legal entity” in compliance with the social media bill, noting it would “withdraw the representative” if the company faced pressure over its “community standards.”

Erkan Saka, an associate professor of journalism and media studies at Istanbul Bilgi University, said Facebook’s decision was likely made to protect its “relatively good” advertisement revenue in Turkey.

“This all proves that commercial companies are not always reliable in opposing authoritarian regimes,” Saka told Al-Monitor, adding, “I believe Twitter will not comply, not because of an idealist point of view but because of its financial calculations. [Turkish] citizens will again need to rely on circumvention tools to use Twitter.”

Since the law came into effect last fall, Turkey has fined noncomplying social media companies 40 million Turkish liras ($5.37 million) each, with those who comply late benefitting from a 75% reduction in penalties.

Under the law, platforms that continue to disregard its requirements are to receive advertisement bans in January and then increasing rates of bandwidth throttling in February and March, eventually making the sites unusable in Turkey.

“I do not know how much advertisement both Twitter and Pinterest receive from Turkey but from today onwards, action will be taken to stop such activity,” Yaman Akdeniz, a law professor at Istanbul Bilgi University and a founder of the Freedom of Expression Association, told Al-Monitor. “One way or another this penalty will be detrimental to the platforms, the impact of which remains to be seen.”

Local representatives appointed by social media companies in Turkey are tasked with fulfilling content removal requests within 48 hours. Failure to comply or provide grounds for rejection can result in financial penalties or the platforms being blocked in the country.

According to a recent report by Twitter, Turkey accounted for 10% of global content removal requests in the first half of 2020. The nation ranked fourth — behind Japan, Russia and South Korea — in such requests during the reporting period, down from first place in previous years.

Milena Buyum, Turkey campaigner for Amnesty International, condemned Facebook’s decision to appoint a local representative. In a statement Monday, she said, “Over the last weeks we have watched as companies, one-by-one, have complied with a draconian new law that will stifle dissent."

She added, “Facebook’s decision leaves them — and Google, Youtube and others — in serious danger of becoming an instrument of state censorship. They must tell us and their users in Turkey what concrete steps they will take to prevent this from happening.”