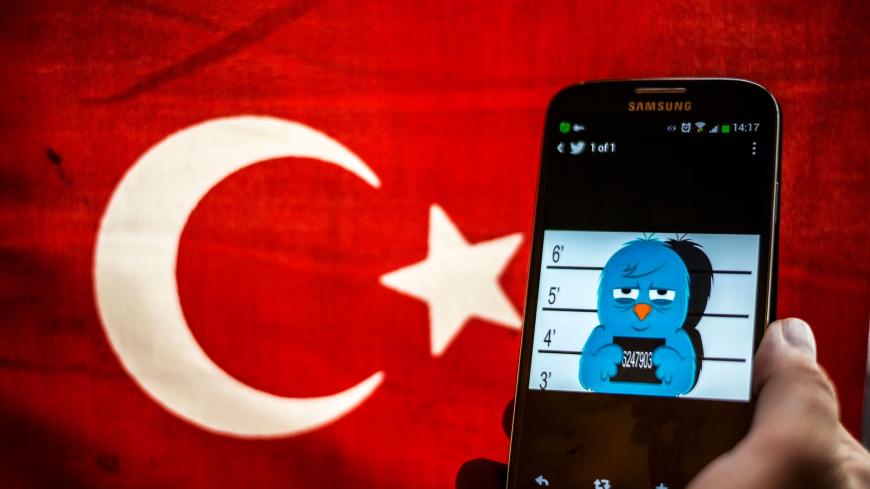 An image depicting a mugshot of the Twitter bird logo is seen on a smart phone in front of a Turkish flag in this photo taken March 26, 2014, in Istanbul. - OZAN KOSE/AFP via Getty Images

ISTANBUL — Social media companies are once again facing the prospect of state regulation in Turkey, and this time digital rights advocates believe lawmakers will follow through on threats to impose tighter controls on the platforms.

In a televised speech Wednesday, Turkish President Recep Tayyip Erdogan announced his party would introduce legislation requiring social media companies to establish a legal presence in the country, where they would need to abide by Turkish laws and domestic court decisions.

The news comes after Turkish Finance Minister Berat Albayrak and his wife Esra Albayrak, the president’s daughter, announced the birth of their fourth child in a Tuesday tweet that was met with a slew of insults online.

Turkey’s Interior Ministry has since launched an investigation into the incident, detaining a number of account holders for “insulting a public official,” a crime carrying a minimum one-year sentence in Turkey.

“Do you see why we oppose social media like YouTube, Twitter, Netflix, et cetera?” Erdogan asked Wednesday. “It is imperative that these channels are brought under control.”

The president added that social media platforms would be forced to appoint representatives in Turkey, echoing a proposal introduced in April that would have required the companies to open offices in the country or have their bandwidth cut by up to 95%, rendering the platforms inaccessible in Turkey. The proposal was introduced along with economic measures against the coronavirus pandemic but was later dropped.

“We are determined to do whatever is necessary for social media platforms to set up fiscal and legal representation in our country,” Erdogan said Wednesday. "We will implement access bans and legal and fiscal penalties after completion of the regulation.”

Following the president’s speech, digital rights advocates said a proposal similar to the April draft bill is likely to be introduced in parliament.

“I think after today it is possible that we can see more control on social media,” Isik Mater, research director at Turkey Blocks, a nonprofit that tracks online censorship, told Al-Monitor. “It's going to come fast because the president took this as an attack on his family, so it's kind of personal.”

Mater noted the move comes days after a separate incident in which a June 26 live video broadcast of Erdogan speaking with Turkish students received nearly 400,000 dislikes on YouTube. The backlash was credited to student anger over state officials’ reluctance to postpone high school and university entrance exams amid the coronavirus pandemic, and the president later requested comments be removed from the page.

Mater said the combined incidents have left the president “furious” over social media use in Turkey, a country where more than 95% of mainstream media outlets provide government-friendly coverage or are owned by companies close to Erdogan’s Justice and Development Party.

“He was never a big fan of social media, as we all know, and now this is going to be a very convenient excuse for him to regulate it,” Mater told Al-Monitor.

Also on Wednesday, the Radio and Television Supreme Council, the state’s media regulator, ordered a five-day blackout on two critical media networks, Halk TV and Tele 1 TV. The move comes after The Independent's Saudi-owned Turkish edition was blocked in Turkey this spring in retaliation for Saudi Arabia blocking access to Turkey’s Anadolu Agency and public broadcaster TRT's Arabic edition in the kingdom.

Yaman Akdeniz, a law professor at Istanbul Bilgi University and a founder of the Freedom of Expression Association, said pressure on independent news outlets and journalists remains constant in Turkey, noting several hundred social media users were detained this spring for sharing “provocative” posts about the pandemic.

Following a brief downturn during the crisis, Akdeniz said internet blocking activity in Turkey was returning to pre-pandemic levels and he expected the increased online policing to extend to social media platforms.

“Turkey is already one of the worst countries for censorship and the internet is already heavily regulated,” Akdeniz told Al-Monitor. “I wonder what else the government can do apart from completely banning all the social media platforms, as indicated by President Erdogan today.”

“Of course, in reality the president and the government want to get rid of the increasing number of critical voices on social media platforms and the true aim of such new laws and regulations will be to silence dissent,” Akdeniz said, adding that if social media platforms accept the conditions, “they will become the long arm of Turkish law enforcement agencies.”