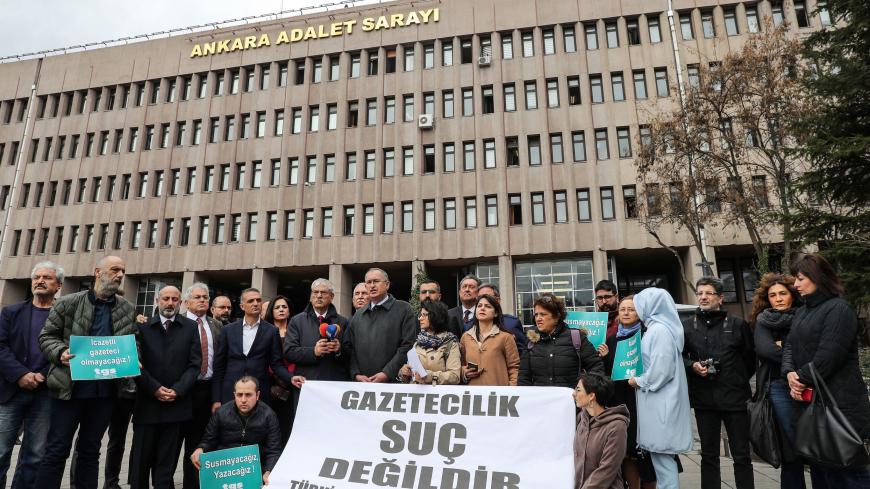 Journalists gather outside the Ankara courthouse on March 10, 2020, behind a banner reading "Journalism is not crime," to protest the jailing of journalists; the demonstration was sparked by the recent arrest of OdaTV's news director over a report on the funeral of a Turkish intelligence officer apparently killed in Libya. - ADEM ALTAN/AFP via Getty Images

ISTANBUL — The Turkish media have come under increasing pressure in recent years as dozens of journalists remain behind bars and the country continues to rank toward the bottom of global press freedom indexes.

On May 7, Turkey’s banking regulator, the Banking Regulation and Supervision Agency, published measures in the nation’s Official Gazette that mandated the imposition of fines for disseminating information that “would damage the financial system and lead to systemic risks due to the loss of trust in the financial system.”

The regulations would also impose fines for the creation of false or misleading impressions “regarding the supply, demand or price” of financial instruments. Though the measures are not primarily aimed at journalists, the wording could have an effect on media professionals reporting on economic trends as Turkey, like other countries, grapples with the economic shocks of the COVID-19 crisis, said Ozgur Ogret, Turkey representative for the Committee to Protect Journalists.

“The experts we have talked to all stated that the vagueness of the text makes it potentially dangerous and I agree,” Ogret told Al-Monitor. “The regulation is one more reason for journalists to worry and maybe self-censor, if nothing else.”

Turkish regulators had previously launched legal action against London-based financial institutions, according to the state-run Anadolu news agency, over allegations they had weakened the Turkish lira, which fell to a historic low of 7.25 against the US dollar May 7.

The alleged currency manipulation and measures to shield Turkish financial markets from further volatility are part of a state efforts to regain control over capital movements as emerging markets are battered by pandemic concerns and the Turkish lira has lost 16% of its value since the start of the year.

Yet the regulations come in an already restricted media climate where 95% of mainstream outlets are pro-state or owned by government-friendly enterprises and independent media organizations remain under pressure following a general decline in freedom of speech rights since the 2016 coup attempt.

Erol Onderoglu, the Turkey representative for Reporters Without Borders, told Al-Monitor that conditions are such that “journalists aiming to inform properly, vocal experts and recalcitrant citizens are taken as a threat.”

Two Bloomberg News reporters remain on trial in Turkey for allegedly undermining the nation’s economy through their reporting of a 2018 currency crisis. If convicted, the pair face up to five years in prison, and while they continue to seek acquittal, the case also included 36 other people and social media users who shared information deemed to be intentionally damaging for the nation’s economy.

“The Bloomberg case is the main reason that makes this new regulation worrisome,” Ogret said. “If that can happen, it is not illogical to assume that a banking regulation may cause trouble for finance and economy reporters or commentators.”

More recently, Fatih Portakal, a prominent and often critical TV anchor for the Fox News channel in Turkey, was charged for posting “false social media messages to manipulate the public” on his Twitter account. If found guilty for the posts, which stipulated the likelihood of future government financial interventions amid the COVID-19 pandemic, Portakal could face up to three years in prison.

This comes as 855 social media users are sought for detention for sharing “provocative” online posts. As of April 27, Turkey’s Ministry of Interior said it had detained 402 of the account holders, alleging their posts were attempting to “cause panic” over the government’s response efforts to stem the spread of the virus.

In other press freedom developments, seven journalists were charged May 8 for violating the regulations restricting coverage of national intelligence operations. Journalists from the news website OdaTV and the newspapers Yeni Yasam, Yenicag and Birgun face charges that could carry sentences of eight to 17 years in prison for reporting on the death of a Turkish intelligence officer killed in Libya, where Ankara is supporting the Tripoli-based Government of National Accord amid an ongoing conflict.

Earlier in May, a media storm took place when commentator Sevda Noyan boasted on live TV that her family had stockpiled enough weapons to kill 50 people if an attempt was made to overthrow the government. Noyan said she also had a list of suspect neighbors she would target in the case of a coup attempt. Responding to public criticism of the incident, Ebubekir Sahin, the head of Turkey’s broadcast regulator RTUK, said that the TV channel that aired Noyan’s comments would not be reprimanded and that the incident as not a “matter to make a big deal about.”

Although he later stepped back, saying that Noyan’s remarks were “unacceptable,” no punitive action was taken against the broadcaster as of this writing.

Meanwhile, prominent opposition figure Canan Kaftancioglu, the Republican People’s Party leader in Istanbul, was widely condemned after appearing on a Halk TV program in which she spoke about “a government change and even a change in the [governance] system through early elections or some other way in the coming period.”

Pro-government commentators said the phrase “some other way” was a veiled endorsement of a coup in Turkey, and RTUK imposed fines on Halk TV and a five-week ban on the program that aired Kaftancioglu’s remarks.

This came after Turkish President Recep Tayyip Erdogan filed a criminal complaint May 6 against Ragip Zarakolu, a managing director of the Evrensel newspaper and Arti Gercek news website, over a column titled “There is no escape from ill fortune” in which he allegedly supported a coup.

Zarakolu has denied such claims, but the column was condemned by government officials, including Erdogan's communications director, Fahrettin Altun. Altun accused the writer of making “coup and execution threats” against Erdogan for publishing the president’s photo next to a photo of former Prime Minister Adnan Menderes, who was executed following a 1960 coup.

Ogret said that given the highly sensitive media environment, the new banking regulations could act to further restrict journalistic coverage of developments in Turkey as the nation continues to deal with the political and economic implications of the coronavirus pandemic.

“Freedom of speech has been in decline in Turkey for years now and it drags press freedom along with it,” Ogret said.

He continued, “The government wants nothing but official comments on the news about any given subject, whether it be economy or Syria or the coronavirus. Those who dare to step out of that boundary are living and reporting in fear of retaliation with each story or social media post.”