Journalists stood trial Wednesday for reporting on the funeral of a Turkish intelligence officer killed in Libya in a court case condemned by press freedom advocates. 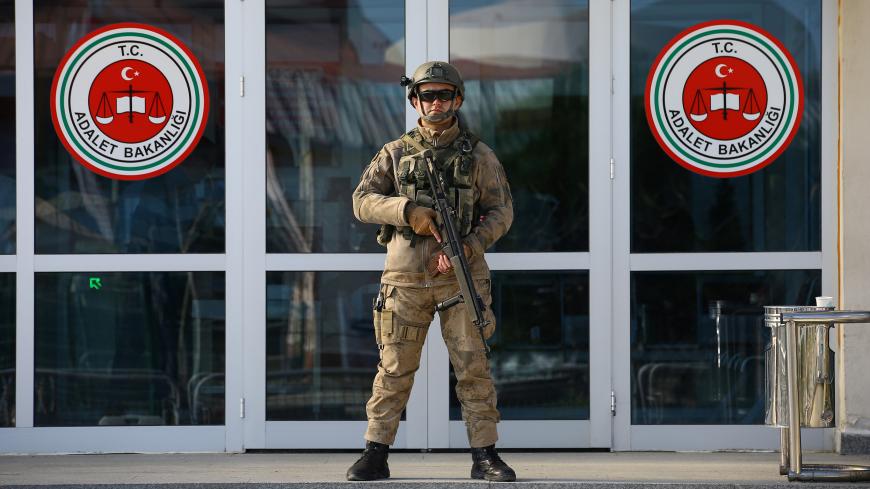 The journalists face eight to 19 years in prison for allegedly violating laws on the disclosure of information relating to state security or intelligence operations in a high-profile case condemned by press freedom advocates, who have called on prosecutors to drop all charges.

Those standing trial include Huyla Kilinc, Baris Pehlivan and Baris Terkoglu of the ultranationalist news site Odatv, Ferhat Celik and Aydin Keser of the pro-Kurdish Yeni Yasam newspaper and Murat Agirel of the nationalist Yenicag newspaper. Agirel along with Erk Acarer of the socialist Birgun newspaper is accused of revealing the intelligence officer’s identity, though Acarer is in Germany and being tried in absentia.

After a lengthy trial, the court ruled to release Terkoglu, Keser and Celik from prison, while the remaining three defendants will stay in jail pending trial. All six journalist will continue court proceedings with the next hearing scheduled for Sept. 9.

"With these nonexistent charges, I have been held alone in a cell in prison for 120 days," Agirel said in his defense Wednesday. "The charges against me are neither based on tangible evidence nor conscientious. … The MIT officer was reported about on social media before I wrote [about] it,” he added, using the acronym for Turkey’s National Intelligence Agency.

The six defendants present in the courtroom Wednesday have been in pretrial detention since the defendants were indicted in March for working “in a systematic and coordinated way” to illegally disclose information about the intelligence officer and Turkey’s operations in Libya. Since November, Ankara has ramped up military support to the UN-recognized Tripoli government in an ongoing conflict against the eastern Libyan National Army.

A civil servant of Turkey’s Akhisar municipality, Eren Ekini, is also being tried for sharing images of the officer’s funeral with the journalists.

Ozgur Ogret, Turkey representative for the Committee to Protect Journalists, said the diverse political leanings of the media professionals on trial “is proof enough” that they did not collaborate on a conspiracy to undermine state operations, adding the prosecution has failed to provide evidence of alleged cooperation.

The trial “is a good example of how Turkish authorities desire a singular voice in the media with nothing but official statements in the news,” Ogret told Al-Monitor. “The only thing these journalists have in common is that they work at outlets that are independent from and critical of the government. That is what is on trial today.”

Scott Griffen, deputy director at the International Press Institute, said the charges against the defendants were “absurd,” noting the intelligence officer’s identity was first revealed during public parliamentary discussions and the journalists had altered his name in their reports.

The charges indicate “Turkey’s attempts to suppress press freedom are not lessening and that journalists who report critically on sensitive subjects continue to be at risk of arbitrary arrest, prosecution and jailing,” Griffen told Al-Monitor.

A hearing was also held Wednesday for Turkish-German Die Welt correspondent Deniz Yucel, who was previously detained on terrorism-related charges in Turkey but has since been released. Yucel’s lawyer, Veysel Ok, presented his defense in absentia and the trial was adjourned until July 16.

In addition, a journalist for Turkey’s Evrensel newspaper, Ender Imrek, appeared in court today on charges of “insulting” Turkish First Lady Emine Erdogan for a 2019 column in which he criticized her for appearing in public with a $50,000 designer handbag. Imrek defended his column, saying, “It’s a journalist’s duty to write about the situation of the president’s family.” His next hearing is scheduled for Oct. 8, 2020.

On June 19, an Istanbul court ruled to block access to forum pages in which users had discussed the handbag, as well as separate forum pages that included details of 2013 phone call between Turkish President Recep Tayyip Erdogan and his son Bilal regarding a graft investigation launched by prosecutors linked to the Fethullah Gulen movement, which the Turkish government claims orchestrated the failed coup in 2016.

Trials are scheduled for June 25 for 11 journalists including Ahmet Altan, who was briefly released from prison in November 2019 before being detained once more on terrorism-related charges.

Reporters Without Borders ranked Turkey 154th out of 180 countries in its 2020 Press Freedom Index, stating the nation remains the world’s top jailer of journalists as pressure continues on critical voices and independent media platforms.

Earlier this month, 19 press freedom organizations signed a letter condemning the withholding of state advertising funds from media outlets deemed oppositional to the government. On Tuesday, Turkey’s Press Advertisement Institution cut public ads to the Evrensel newspaper for 45 days due to a May 5 article by Ragip Zarakolu, in which the author allegedly implied Erdogan would meet a fate similar to that of Turkey’s former Prime Minister Adnan Menderes, who was executed following a 1960 military coup.

In September 2019, a state ad ban was imposed on Evrensel for six months.