The resumption of court hearings in Turkey has press freedom advocates anxious, amid fears of a second COVID-19 wave and ongoing pressure on the media covering the pandemic. 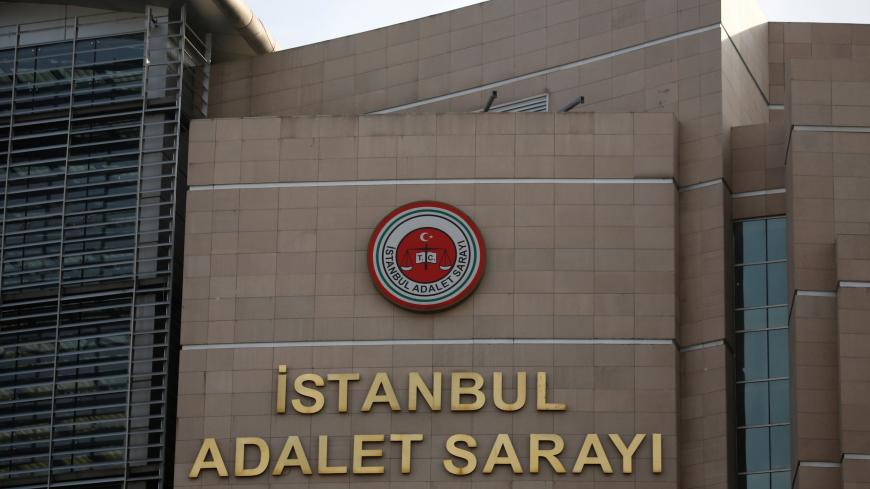 ISTANBUL — Images of people standing in long lines outside Istanbul’s Caglayan Courthouse filled social media streams in Turkey Tuesday as the nation’s courts reopened this week to a backlog of cases postponed by the coronavirus pandemic.

Now with many press freedom cases slated for hearings in the coming days, lawyers are preparing to defend not only their clients, but also themselves against the novel coronavirus as they head back to courtrooms.

Following a nearly three-month suspension of legal proceedings, Caglayan, the largest courthouse in Europe, was expected to receive at least 50,000 people today, according to Mehmet Durakoglu, head of the Istanbul Bar Association, which released social distancing guidelines for lawyers to protect themselves against COVID-19 exposure in trial rooms.

In anticipation of the large crowds, Justice Minister Abdulhamit Gul said, “Our courthouses are ready for the new normal,” in a tweet Tuesday morning, stating precautions had been taken to contain the virus. Yet some lawyers complained the measures were insufficient as Turkey has witnessed a rise in new cases this week, sparking fears a second COVID-19 wave is on the horizon.

Veysel Ok, co-director of Turkey’s Media and Law Studies Association, said the pandemic has extended the pre-trial detention periods for a number of media professionals, who face increased exposure to COVID-19 inside Turkish prisons, and that legal decisions should be delivered without compromising the health of jailed journalists.

“It’s very early to reopen courts, in my view, but it doesn’t mean that people in detention should remain there,” Ok told Al-Monitor. “There are many ways to hold hearings, such as with online interfaces and teleconference calls.”

In the coming days, Ok said he would head to the Caglayan Courthouse for five cases, including the final hearing of Turkish-German journalist Deniz Yucel, who is being tried in absentia.

“If the courts are open, we have to go … we have to take the risk of joining the proceedings,” Ok told Al-Monitor.

Erol Onderoglu, the Turkey representative for Reporters Without Borders and Bianet media freedom rapporteur, said he would attend some of the trials this week but was “concerned that coronavirus measures might restrict the observation of some cases.”

He also expressed concern for the ongoing detention of six journalists taken into custody amid the pandemic without the opportunity to stand trial due to COVID-19 precautions. The journalists, Baris Pehlivan, Hulya Kilinc and Baris Terkoglu of OdaTV; Ferhat Celik and Aydin Keser of the Yeni Yasam newspaper; and Murat Agirel of the Yenicag newspaper, were detained for reporting on the death of a Turkish intelligence officer in Libya and are expected to appear in court on June 24.

Birgun columnist Erk Acarer is also a defendant in the trial but is currently abroad and not expected to attend the hearing.

“These six media representatives were all jailed in early March, but couldn't be released under coronavirus measures since the government exempted those prosecuted under anti-terror provisions,” Onderoglu said, referring to a program that released 90,000 inmates to reduce the spread of COVID-19 in state penitentiaries but excluded political prisoners.

Another two journalists, Muyesser Yildiz of OdaTV and Ismail Dukel of the TELE1 broadcaster, were detained on June 9 over Libya-related reporting and await hearings. In addition, Voice of America correspondent Arif Aslan was detained early Tuesday in Turkey’s eastern province of Van for reporting on a protest march by the pro-Kurdish People's Democratic Party.

Meanwhile, pressure continues on journalists and social media users sharing “provocative” information on COVID-19. According to Turkey’s Interior Ministry, 510 social media users had been detained as of May 22 for “baseless” posts regarding the health crisis. The same statement noted a total of 1,105 suspects were being sought for their social media activity.

At least 12 Turkish reporters have been taken into custody since March for their coverage of the pandemic, according to Onderoglu.

“It’s not only journalists that have come under pressure during the pandemic,” Ok told Al-Monitor. “For example, doctors unions have come under legal pressure in Urfa, in Diyarbakir, in Van because they shared different data than the information shared by the state on COVID-19.”

The developments come as the daily rate of newly reported coronavirus cases in Turkey has risen to about 1,500 this week after previous restrictions were eased and weekend curfews ended on June 1. Health officials warn precautions may be reinstated if infection rates don’t subside as the nation achieved relative success in containing the virus prior to the repeal of inter-city travel bans and the reopening of most public venues earlier this month.

As of Tuesday, the Health Ministry reported 181,298 confirmed cases and 4,842 virus-related deaths in Turkey. In response to the recent uptick in infections, 42 of Turkey’s 81 provinces have made wearing face masks mandatory in crowded public spaces.