In a mixed verdict, three Turkish journalists charged with revealing state secrets were released from jail during a trial Wednesday. 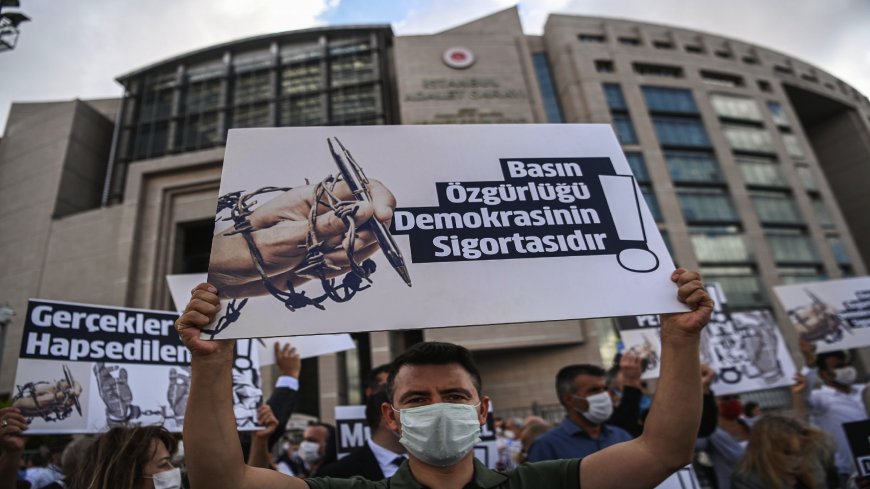 Demonstrators hold posters reading "Journalism is the insurance of democracy" and "If the journalist is arrested, you won't know about news," as they stage a protest in front of a courthouse in Istanbul on Sept. 9, 2020, before a trial of jailed journalists. - OZAN KOSE/AFP via Getty Images

They were among seven journalists on trial Oct. 9 for allegedly revealing the identity of a Turkish intelligence officer killed in Libya in February during their coverage of his funeral. Agirel, along with previously released Yeni Yasam editor-in-chief Ferhat Celik and managing editor Aydin Keser, was sentenced to four years and eight months in prison for “disclosing information and documents about intelligence activities.”

Under the same charge, Pehlivan and Kilinc were sentenced to three years and nine months in prison. Oda TV news director Baris Terkoglu was acquitted, and the court file was separated for the seventh defendant, BirGun reporter Erk Acarer, who is being tried in absentia and remains abroad.

In addition, Eren Ekinci, a press officer for the main opposition Republican People’s Party's Akhisar Municipality, has been arrested and is awaiting trial for allegedly sharing images of the intelligence officer’s funeral with press members.

“This is a case that should have never been opened, but since the jailed journalists have been released, this is good news unless appeals come,” Ozgur Ogret, Turkey representative for the Committee to Protect Journalists, told Al-Monitor. “They are not out of the woods yet.”

The high-profile case was one of many involving press freedom issues in Turkey, as more than 20 journalists face trials this week. Prosecutions on critical media professionals and organizations have increased sharply following a crackdown spurred by a 2016 coup attempt that saw dozens of news outlets shuttered and placed the nation among the world’s leading jailer of journalists.

In its 2020 World Press Freedom Index, Reporters Without Borders ranked Turkey 154 of 180 countries. Now, press freedom cases are once again in national headlines as courts work through a backlog of trials suspended earlier this year by the coronavirus pandemic.

“This trial isn't about a news story, but an attempt to punish my entire journalistic work," Pehlivan said in his testimony Sept. 9. Pehlivan had previously stated he was the victim of physical assault while in detention.

During the hearing, the defendants said they had not intentionally shared images of national security personnel and assumed they were lawfully covering a state funeral. The defendants also stated the agent’s name had been previously publicized and they had not sought to reveal state secrets. Prosecutors had sought prison sentences up to 19 years for the journalists.

Another key court case held Sept. 9 was the Ozgur Gundem newspaper trial in which four defendants faced terrorism-related charges through their collaboration with the now-shuttered newspaper. Held in the Istanbul 23rd High Criminal Court, defendants Zana Bilir Kaya, Inan Kizilkaya, Kemal Sancili and human rights lawyer Eren Keskin saw the trial adjourned until Dec. 24, 2020, after their lawyers filed a petition to be excused from the hearing, which the court accepted.

Also on trial Wednesday were Etkin News Agency editor Semiha Sahin and journalist Pinar Gayip for terrorism-related charges. Sahin and Gayip did not attend the hearing, and the trial was adjourned until Dec. 22, 2020.

In addition, journalist Oktay Candemir was released on probation Wednesday after brief detention stemming from a satirical tweet he shared regarding a historical Turkish television series that was allegedly “insulting the memory of a dead person.”

“The government should put an end to these arbitrary procedures to restrict critical media and freedom of expression,” Onderoglu told Al-Monitor.