In the wake of a brutal attack on a Turkish journalist, few believe the official story of a traffic altercation as political violence ravages the country. 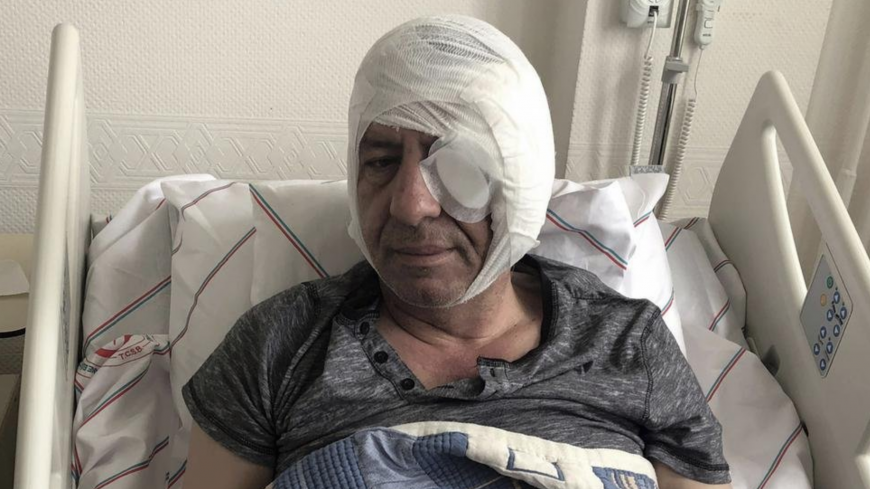 Yavuz Selim Demirag, a veteran columnist for Yeni Cag, is seen in the hospital after suffering an attack on May 10, in this photo uploaded May 11. - Twitter/Dailyworld

“Sharing what you witness, what you know is a matter of honor in our profession. But writing and speaking come at a price,” wrote Yavuz Selim Demirag, a veteran columnist in a recent esaay for the right-wing conservative Yeni Cag. Two weeks later, on May 10, Demirag, a fierce critic of Turkey’s president Recep Tayyip Erdogan, was attacked outside his Ankara home by a group of men wielding baseball bats, baying “kill him, kill him” before fleeing in a stolen vehicle. Demirag remains in a military hospital recovering from a concussion, bruises and a swollen eye.

Six of the seven perpetrators were detained by authorities only to be freed a day later on the grounds that the journalist’s injuries were not life threatening.

During their interrogation, the assailants claimed they got into a fight with Demirag over a traffic incident. Few believe this version of events.

Ozgur Ogret, the Turkey representative for the Committee to Protect Journalists, said, “This organized attack against a journalist which mercifully did not result in death is not only criminal but represents an indisputable assault on press freedom.” Ogret told Al-Monitor, “I would like to remind the authorities that the failure to punish violence against journalists will lead to grave and incontrovertible consequences and smooth the path to similar attacks.”

Demirag was ambushed minutes after he was dropped off at his home by a fellow journalist following his weekly show "Meydan" on Turkiyem TV. That evening, the pair had slammed Erdogan’s government over alleged corruption in Istanbul, which until the March 31 municipal polls was governed by his ruling Justice and Development Party (AKP). They dwelled at length on what they described as the millions of Turkish lira diverted to various foundations run by Erdogan’s immediate family members.

Turkey is a notorious bully when its comes to journalists. It retains the dubious title of biggest jailer of journalists in the world. According to the French advocacy group Reporters Sans Frontieres, at least 120 journalists remain behind bars. Some 36 of them are in prison for their journalistic work, said Erol Onderoglu, the Turkey representative of the watchdog.

Onderoglu is himself facing up to seven and a half years in prison along with human rights campaigner Sebnem Korur Fincanci and journalist Ahmet Nesin for taking part in a solidarity campaign in support of the Kurdish newspaper Ozgur Gundem. The now-shuttered newspaper’s editor Inan Kizilkaya remains in pretrial custody.

Onderoglu told Al-Monitor, “The lever for intimidating journalists and the suppression of critical reporting is the judiciary, with scores of journalists being prosecuted and jailed.”

The attack on Demirag, he said, represents a new low, with physical violence unleashed against critics. “The message, however, is destined not so much for Demirag as it is for the political party that he is allied with,” Onderoglu contended. He was referring to the right-wing opposition Iyi Party, which bled away votes from the AKP and his informal ally, Devlet Bahceli, leader of the far-right Nationalist Movement Party.

Erdogan is bracing for the controversial June 23 redo he managed to wangle for Istanbul after the country’s Supreme Electoral Commission upheld the AKP’s dubious claims of irregularities. Clamping down on negative media coverage is more critical than ever as the AKP fights to win back Turkey’s biggest city and a long-running source of privilege and perks.

On Sunday the Turkish Foreign Ministry denied allegations by Turkish-German journalist Deniz Yucel that he had been tortured, threatened and denigrated during his near year-long detention in Istanbul’s Silivri prison on scantily evidenced terror charges. The trial against Yucel, who was freed in February 2018 following massive pressure from the German government, is ongoing. On Friday he told a Berlin district court, which will relay his testimony, that he held Erdogan “personally responsible” for his ill-treatment.

The president has been accused of encouraging the climate of impunity that saw Kemal Kilicdaroglu, the leader of the main opposition Republican People’s Party (CHP), being mobbed and punched in the face last month by a crazed crowd during the funeral of a Turkish soldier slain by Kurdish militants. The habitually pugnacious Erdogan put out a limp statement characterizing the attack as a protest that had escalated into violence. He did not bother to call Kilicdaroglu, who leads Turkey’s second-largest and oldest political party.

Today Ekrem Imamoglu, the CHP mayoral candidate for Istanbul who won by a slim margin only to be stripped of his seat last week, took the opposite path. He visited Goknur Damat, a makeup artist who was stabbed last night by an unknown assailant who hissed, “Are you that brave-heart?” before escaping. Erdogan had received Damat at his palace in 2017, calling her “my adopted daughter” after hearing the story of how she beat breast cancer and launched a small business on a television program. Damat was blasted as an ingrate by pro-government trolls on social media after revealing that she had donated 20,000 liras to Imamoglu’s campaign.

Erdogan has yet to comment on the attacks against Damat and Demirag. But his lieutenants had words for prominent Turkish journalist Cansu Camlibel, who until recently was the Washington correspondent for the mass circulation daily Hurriyet. His senior adviser Gulnur Aybet castigated Camlibel for airing criticism of the government’s decision to appoint an outsider with little experience to qualify him as director general of personnel at the Turkish Foreign Ministry. Aybet claimed in a series of tweets the real reason for Camlibel’s disapproval was that Bekir Hazar is a graduate of an Islamic clerical training school.

Erdogan’s influential communications director, Fahrettin Altun, waded in yesterday with a tweet of his own, revealing a lack of self-awareness that has become something of a hallmark for the AKP.

“Is this journalist saying that certain ministries should be out of bounds to civil servants with a certain background regardless of their qualifications?" Altun asked. “Wouldn’t you agree that this totally unacceptable by European standards too?”