A reporter for Germany's Die Welt newspaper was recently released after a year in prison with no trial, but Turkey is likely to continue detaining foreigners for political bargaining. 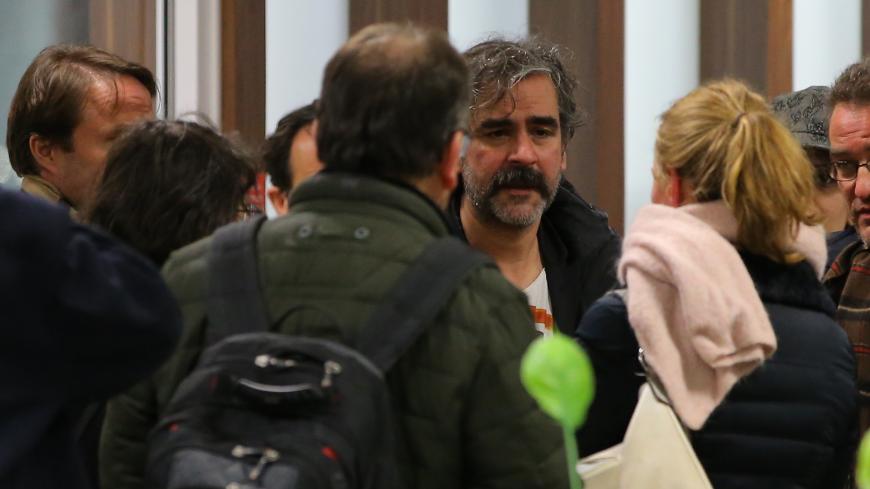 Did Turkey imprison an innocent man for over a year, or was it coaxed to release a dangerous terrorist or spy under pressure from the German government? This question is being raised since German-Turkish journalist Deniz Yucel was freed Feb. 16. That day, Yucel released a short video clip explaining that as he was leaving the prison, he was handed a piece of paper dated Feb. 13 that informed him the court had decided to continue his prison term.

“I was still let go," he said. "I don't know why I was released today, or [why I was] arrested last year. But I know that neither my arrest — or rather, my being taken hostage — nor my release has anything to do with the rule of law.”

Yucel’s release after a lengthy bargaining process between German and Turkish authorities was no surprise. To the contrary, it confirmed the adage, "Desperate times call for desperate measures." The timeline from his arrest to his release proves how desperate Turkish President Recep Tayyip Erdogan and his Justice and Development Party (AKP) government have become to continue credible foreign relations.

Prime Minister Binali Yildirim, on his way Feb. 14 to Berlin for an official visit, told the press, “I hope [Yucel] will be released soon. I believe there will be positive developments soon.”

That statement was a clear sign that Yucel’s release was imminent. Yucel is a correspondent for Germany's Die Welt (DW) newspaper.

Another crucial moment came Feb. 8, when AKP Vice Chair Ravza Kavakci Kann told a German television channel, “Human rights have excelled under Erdogan.” Yet when he was asked how Yucel could be kept in prison for a year without any charge, Kann didn't have much to say. When Yucel was detained, he was being questioned about supposedly spreading "terrorist propaganda" and "inciting hatred."

DW’s Michel Friedman summarized the situation when he said, "No court, no accusation, but [Erdogan] decided he is guilty. Human Rights? This is how the law exists today in Turkey — not [through] the courts, but the president.”

The German-Turkish negotiations for Yucel’s release had been in the works for a while. Even Yucel was aware of them. He told his lawyer he didn't want to be a part of a “dirty deal” between Germany and Turkey. German officials had hinted that the government wouldn't be selling arms to Turkey as long as Yucel was captive.

So why was Yucel arrested to begin with? On April 14 (just before the April 16 referendum that granted greater power to the presidency) Erdogan told the Turkish press, “As long as I occupy this position, [Yucel] will not be released.” Erdogan referred to Yucel as a spy and terrorist. He claimed that Yucel was a German agent acting as a liaison with the Kurdistan Workers Party and that the Turkish government had incriminating evidence against him. The alleged evidence, which was said to be photos or videos, hasn't been made public or shared with the courts.

Al-Monitor asked senior government officials why Yucel was arrested and why he was released. Most speculated that his arrest was likely a tit-for-tat affair, because German authorities were holding several pro-AKP Turkish citizens. For example, government elites noted that last year, Turks in Germany who were asking questions about affiliates of fugitive cleric Fethullah Gulen (whom Erdogan blames for an attempted coup in July 2016) were taken into custody as Turkish spies. Turks who confronted alleged Kurdish activists in Germany also were imprisoned. So, in turn, arrests of German citizens in Turkey would send a message to Germany that the countries share a "relationship of equals." This is a concept heard quite often from both the pro-AKP press and the government elite.

Yucel is not the first German whose release was based on backdoor deals rather than independent court proceedings. Peter Steudtner and other German human rights activists were held in a Turkish prison for three months charged with being spies. Steudtner was released in October. In the case, known as the “Buyukada trial,” the prosecution was asking for sentences of up to 15 years in jail. Yet thanks to a deal quietly brokered by former German Chancellor Gerhard Schroeder, eight out of 11 activists in the Buyukada trial were released.

Yucel’s arrest and the process of his release provide us with an understanding of how the meaning of "political prisoner" has evolved in Turkey.

Turkey's government has increased domestic surveillance of all residents. People are encouraged to snitch if they observe anti-AKP behavior. Foreigners, dual citizens and people whose names are known internationally undergo meticulous surveillance. Despite the effort, Turkey has failed to provide credible evidence against those taken into custody. As Yucel's case has shown, the courts don't need to produce an indictment, and they aren't obliged to follow due process or even inform those under arrest of the charges against them. A general blanket accusation of being a spy or terrorist is sufficient. The cases are political not only because those in custody are presented as potential threats to the government, but also because decisions about their court cases aren't made in the courts. Rather, the decisions are coming from government elites.

In Yucel's case, Erdogan had to eat his promise that Yucel would remain in prison as long as Erdogan was president. Of course, he dined quietly. And Yildirim’s good wishes about Yucel’s imminent release received little to no play in the mainstream media. A few days after Yucel’s release, Yildirim was irritated when he was asked about it. He said, “Is there no other issue between Germany and Turkey [to ask about] except for this guy [Yucel]?"

When the Turkish government reverses its course, most of the time Erdogan refrains from commenting and the majority of media outlets completely ignore the change. At the time of Yucel’s release, for example, Erdogan was busy continuing his tirade about Turkey's military operation in Afrin, Syria, and threatening US forces with the “Ottoman slap,” ridiculing them for their ignorance of how harsh it could be. And pro-AKP social media trolls were sharing images of Erdogan, wearing a fez, slapping US President Donald Trump under the hashtag #OsmanlidanABDyeTokat, or “Slap from the Ottomans to USA.”

Indeed, Turkey's government haphazardly struggles to sweep whatever it can't face under the rug. For example, in February 2017, Yucel was "invited" to police headquarters to be questioned about his interactions with the Redhack organization and about Erdogan’s son-in-law Berat Albayrak’s emails. He reported to the police on his own. The allegations were “provoking public hatred and enmity” and “spreading propaganda about terror organizations.”

Turkey can manipulate public opinion locally, but it is not fooling the world. The World Justice Project’s 2017-18 index of how well countries adhere to their rule of law demonstrates Turkey's regression: It dropped to 101 from its already dismal position of 99 out of 113 countries.

Turkey will probably continue its descent. In its quest to establish "relations of equals," the Erdogan administration has started treating other countries the way it treats domestic opposition. The motto of the government elite has become, “If they don't love and respect us, they will fear us.” Domestically, this campaign was against seculars, but as the recent arrest of Al-Azhar-trained religious figure Alparslan Kuytul demonstrates, Erdogan’s arbitrary actions are becoming bolder. Hostages in desperate times will continue to suffer in Turkish prisons as long as the victims present opportunities for the Erdogan administration to exploit.