Why is Erdogan rushing into a referendum now?

While Turkey's economic and security vulnerabilities increase, Erdogan has run out of enemies to rally his base against for the April referendum. 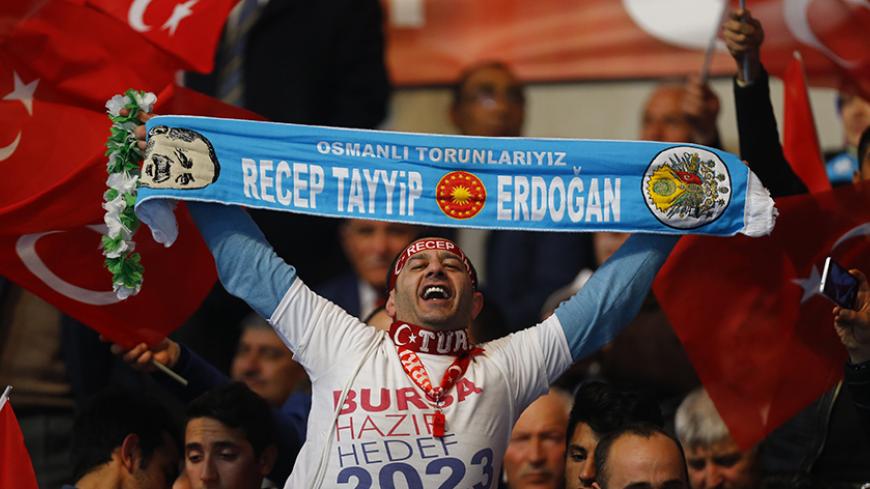 A supporter of the ruling Justice and Development Party holds a banner that reads "We are grandchildren of the Ottomans: Recep Tayyip Erdogan" during a rally for the April 16 constitutional referendum, in Ankara, Turkey, Feb. 25, 2017. - REUTERS/Umit Bektas

The public seems quiet in Turkey. One may think this silence means everyone is happy, as government statistics claim. On the other hand, one might suspect that in the current system where protests are banned, dissent is promptly punished and courts are compromised, there are almost no venues to air public grievances. Perhaps the public silence indicates a deep resentment and fear, rather than happiness with government services.

In the past couple of years, Turkish President Recep Tayyip Erdogan has often repeated the phrase, “We have been cheated,” as a way of escaping responsibility. Does his lack of accountability signal an approaching legitimacy crisis in Turkey?

As the vote nears on a referendum that would grant Erdogan unprecedented power, the questions heard most often are, “Why is Erdogan pushing for the referendum? What will he accomplish that he has not been able to do so far?” But Erdogan's presidential dreams are evolving, as Al-Monitor has been reporting since early 2013.

So what's his hurry? Despite the illusion that Erdogan has a strong grip on all aspects of government, he is gradually losing control.

Government agencies are dissolving into a bureaucratic mess. Since the July 15 coup attempt, the ruling Justice and Development Party (AKP) has been waging a war to cleanse the bureaucracy of followers of cleric Fethullah Gulen, whom Erdogan blames for the attempted coup. This purge not only led to hundreds of thousands of people losing their jobs, often with no apparent rhyme or reason, it also deepened AKP cronyism.

Public trust in these institutions has deteriorated, and Erdogan is determined to never again form alliances with groups as popular and strong as Gulen's. Instead, different religious orders are now able to form bilateral relations with the government and divide up different positions accordingly.

First, securing a government job is easier if you belong to one of these religious orders. Now Erdogan’s government is beholden to several small groups. This may be a fine strategy initially, but as the demands of these groups rise, and the economic wealth to be distributed shrinks, Erdogan knows he will not be able to satisfy these rival groups for long. As Al-Monitor reported in November, some of these groups are openly declaring that they are arming themselves in case there is another coup attempt.

This game of balancing a variety of small crony groups against each other not only causes a bulge in government employment but weakens economic health and encourages distrust against state institutions.

Erdogan is savvy enough to see the potential troubles ahead. He promised his supporters Feb. 18 that if the referendum passes April 16, he will immediately return to the AKP officially — even though the current constitution requires him to be neutral. The situation has come to this: You either love and applaud Erdogan or criticize and hate him. There are no gray areas.

The second consequence of this chaotic state under emergency law is a deepened legitimacy crisis and the lack of rule of law. For example, we see scores of artists, academics, journalists and politicians taken into custody. Police raids, arrests and bans to keep individuals from leaving the country have become routine. There is a pattern behind them: inconsistencies among bureaucratic agencies and the frequency of interagency miscommunications. As an example, Idris Baluken, a lawmaker from the Peoples’ Democratic Party, was arrested in November and released in January, then was arrested again in February.

One prominent defense lawyer from Istanbul told Al-Monitor, “In most cases when we speak to the prosecutors they tell us they are not quite sure what is expected of them. Senior bureaucrats tell us in confidence they know our defendants are innocent, and they are not sure why this witch hunt is taking place. But different agencies have conflicting interests and priorities, causing further confusion and victimizing innocent people. There are even cases with charges against people long-deceased. Irregularity has become the norm. At the end of the day, I find myself trying to calm police officers and prosecutors, who are under a heavy emotional burden, but they keep serving a system they know is failing.”

The situation is such a terrible mess that in one case, where Al-Monitor columnist Kadri Gursel and several other prominent journalists are defendants, the prosecutor, Murat Inam, is himself a defendant in another court case for allegedly being a member of the Gulen movement.

It has even become a daily routine in Turkey for dedicated AKP journalists to openly threaten other pro-AKP networks and journalists with arrest for their reporting. While struggling to end the deep state, Erdogan's government has created compartmentalized government agencies that are rivals at the expense of the public good. This also explains why people are arrested, then released, only to be arrested a short time later on the same charges.

Erdogan is running out of time. Since he became president in 2014, he has been acting against the existing constitution with the claim that, because he was elected by popular vote, he cannot be confined to a merely symbolic position. How much longer can Erdogan’s government operate like this with the economy deteriorating so quickly? The question is whispered frequently in Ankara. In a supposedly leaked conservation from 2014, Efkan Ala, then Erdogan’s senior adviser, allegedly told a senior bureaucrat to employ whatever means necessary to accomplish his goals, and laws would be created to make sure the actions were lawful. This mentality has become the norm, and there are new rules and regulations introduced almost weekly.

The 18 amendments in the referendum are not a luxury, but a necessary first step to preserve Erdogan’s rule.

The AKP is very publicly campaigning for a "yes" vote on the referendum. Every day, constituents are told about a different side effect of democracy. For example, on Feb. 22, Erdogan’s official Twitter account tried to explain why separation of powers is harmful to Turkish politics. All checks and balances, all political deliberations, in Erdogan’s view, are the cause of the economic crisis and political chaos. Similarly on Feb. 26, at another rally, Prime Minister Binali Yildirim said oppositionists complain that passing the referendum will result in one man holding all control.

"What else was it supposed to be?" he asked. "Of course it will be one-man rule.”

No wonder one video became an instant hit on social media. Released Feb. 24, it shows Foreign Minister Mevlut Cavusoglu touring a marketplace, chatting with customers and vendors. One elderly vendor complains about financial hardship and the steep rise in prices. Cavusoglu and his entourage walk away once the conversation sours. The vendor says, “You don’t go without answering me. You need to answer me.” But the minister did not respond.

Turkey's government stopped being accountable for its actions long ago. So here's a disturbing thought: What are Erdogan’s plans in case the amendments are not approved?