Eren Keskin, a prominent human rights lawyer, was among four defendants sentenced to prison on terror-linked charges Monday in a newspaper trial that raised concerns over media freedom in Turkey. 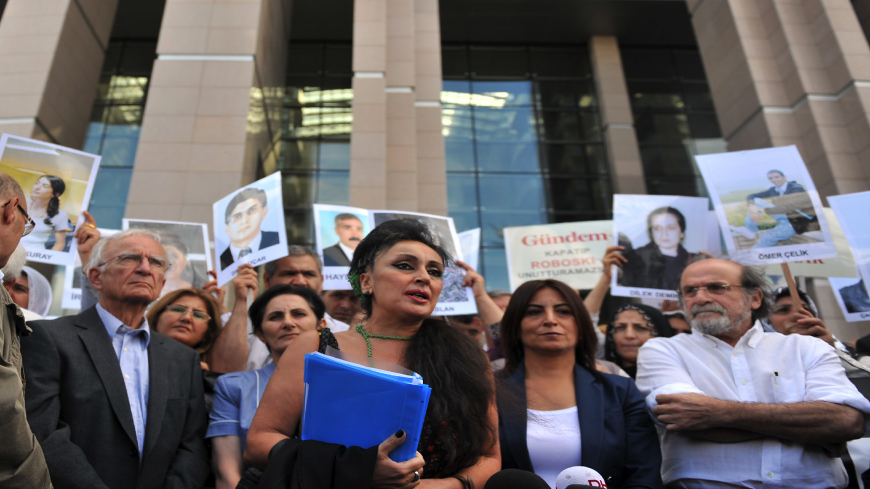 Eren Keskin (C), the director of Turkish newspaper Ozgur Gundem, speaks to the press as Kurdish women hold pictures of jailed journalists in Istanbul on Sept. 10, 2012, during the start of the trial of 44 journalists with suspected links to rebels from the Kurdistan Workers Party, in the latest of a series of legal operations against the Kurdish militants. Some 44 suspects, 36 of them arrested pending trial, are currently facing charges in the 800-page indictment that was unanimously accepted by the court in May 2012. The suspects are charged with leading a terrorist organization, being a member of a terrorist organization and being a member of the press committee of a terrorist organization. - BULENT KILIC/AFP/GettyImages

ISTANBUL ­— More than four years after the state-ordered shuttering of the pro-Kurdish newspaper Ozgur Gundem, a Turkish court issued jail sentences Monday to four of its administrators on terror-related charges.

Among the convicted was Eren Keskin, a prominent human rights lawyer and co-chair of Turkey’s Human Rights Association, who served as a temporary guest editor when the newspaper was facing increasing legal pressure in 2016.

Speaking in a phone interview Wednesday, Keskin said ongoing court cases of former Ozgur Gundem employees and supporters highlight continued infringements on freedom of speech in Turkey and present challenges to the nation’s independent media outlets. She also said she would appeal her verdict “through all legal means.”

“I find this decision unlawful and illogical because it violates Turkey's domestic legislation, rulings by the Court of Cassation and international conventions to which Turkey is a signatory,” Keskin told Al-Monitor.

On Monday, the 23rd Istanbul Court of Serious Crimes convicted Keskin, along with Kemal Sancili and Inan Kizilkaya, Ozgur Gundem’s publisher and news editor, respectively, of membership in an armed terrorist organization, sentencing each of the defendants to six years and three months in jail. The court also convicted co-editor-in-chief Zana Kaya of making propaganda for a terrorist organization, issuing him a two-year and one-month prison sentence.

In 2016, Ozgur Gundem was one of more than 130 media outlets closed by the government during a state of emergency imposed after an attempted coup that year. Dozens of newspaper staff were detained, with some alleging ill treatment while in custody.

The paper was ordered to cease operations after police raids on its Istanbul offices in August 2016 over suspected ties with the Kurdistan Workers Party (PKK), a designated terrorist organization in Turkey, the United States and the European Union.

Prior to the Ozgur Gundem’s closure, Keskin was one of dozens of human rights defenders and journalists who served as symbolic guest editors for one day each at the paper in a show of solidarity. Keskin denied accusations that in her temporary role she worked under orders from the PKK.

“Courts must prove with concrete evidence that an individual has submitted their will to the armed group,” Keskin told Al-Monitor. “I have been with the human rights movement for more than 30 years. I am not a member of any organization except the Human Rights Association.”

Under a separate case in May 2019 that remains in the appeals process, Keskin and six Ozgur Gundem employees were each issued three years and nine months prison sentences on terrorist propaganda charges. Currently, Keskin said she is facing 143 cases against her in addition to the main Ozgur Gundem case for which she was convicted this week.

Other high-profile individuals facing charges over their support for Ozgur Gundem include Erol Onderoglu, the Turkey representative for Reporters Without Borders and editor of the Bianet news website; Sebnem Korur Fincanci, an internationally recognized forensics expert and chair of the Turkish Medical Association; and Ahmet Nesin of the online news outlet Arti Gercek.

The three face a retrial on charges of promoting terrorist propaganda through Ozgur Gundem after prosecutors appealed the verdict of a previous trial, which ended in their acquittal in 2019.

“The trials of the guest editors in the solidarity campaign of 2016 were a warning to others who would dare to stand with the Ozgur Gundem journalists, and that remains the case in the retrial of Erol Onderoglu, Ahmet Nesin and Sebnem Korur Fincanci,” Ozgur Ogret, Turkey representative for the Committee to Protect Journalists, told Al-Monitor.

Taken together, the cases highlight ongoing state pressure on independent media in Turkey, where the majority of mainstream news outlets are government-run or operated by government-friendly companies. In its 2020 World Press Freedom Index, Reporters Without Borders ranked Turkey 154 out of 180 countries, with media rights advocates often raising concern over the acute obstacles faced by pro-Kurdish outlets such as Ozgur Gundem.

“Ozgur Gundem's history, considering it was published under many different names in the past, is full of vindictive judicial action trying to silence this tradition of pro-Kurdish journalism,” Ogret told Al-Monitor, adding the latest verdict was “the most recent link on that long chain.”

Following Monday’s decision, Keskin posted a tweet saying she had stood trial many times and had been in prison for her thoughts before, stating “I'm not going anywhere.”

“In Turkey, freedom of speech and press is worse than ever,” Keskin told Al-Monitor. “In the '90s, human rights violations were grave, but freedom of speech was not under pressure like today. Now, none of the dissidents are allowed to express opinions.”

“Eren Keskin has dedicated her life to defending the rights of women, prisoners and fought for justice for the families of the disappeared,” Buyum said Monday. “This verdict is yet another shocking example of anti-terrorism laws being used to criminalize legitimate, peaceful activities.”