Have Turkey's human rights violations reached point of no return?

Prominent Turkish academic lands in solitary confinement for writing about the devastation and human rights violations conducted by the Turkish state in southeast Turkey. 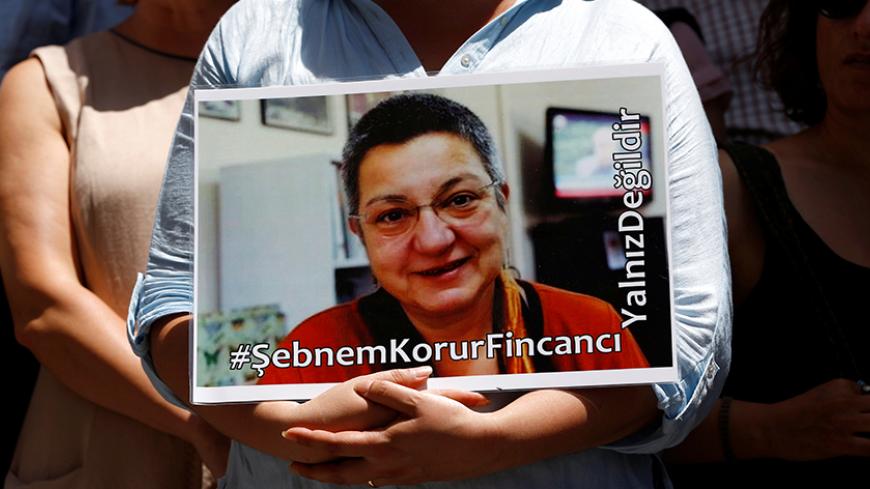 A demonstrator holds a picture of Sebnem Korur Fincanci, president of Turkey's Human Rights Foundation, during a protest against the arrest of three prominent campaigners for press freedom, in front of the pro-Kurdish Ozgur Gundem newspaper in central Istanbul, June 21, 2016. - REUTERS/Murad Sezer

Last week I was seated next to Sebnem Koru Fincanci at a hearing in the Swedish parliament titled "The State of Human Rights in Turkey." Fincanci delivered a very impressive presentation, using visuals that showed the destruction and devastation and speaking convincingly on human rights violations committed by Turkish security forces in the southeastern Kurdish town of Cizre. She is the author of a recent detailed report on Cizre.

When it was my turn to speak, I began with a tribute to her, saying Fincanci is the most prominent forensic medicine expert in Turkey and an indefatigable human rights activist. I did not conceal my pride in sharing a rostrum with her on the human rights issues. Apart from being a well-known scholar on forensic pathology, she is currently the chairwoman of the Human Rights Foundation of Turkey.

After the session she told me that her daughter had married a few days before our encounter in Sweden, and that on her return back to Turkey the first thing she would do is to rush to the city of Adana, where her daughter and son-in-law would be residing.

It did not happen. Fincanci is now in solitary confinement in an Istanbul jail pending trial, possibly facing 14 years in prison.

I read an interview in which her daughter Kardelen Fincanci said that she and her close family members were expecting this after she had authored the Cizre report. Fincanci's daughter did not hesitate to warn a relatively broad public. "Do not ever think you would remain in peace," she said, referring to what happened to her mother. "This state [Turkey] is trying to chain everyone [whom it sees as dissenting]."

If you are respected for what have you done and thus are invited to the parliament of Sweden to present your work, that could be the main stimulus to land in prison in Turkey. Nevertheless, that was not what Fincanci herself was expecting. During our almost day-long conversation, such a possibility, including her ending up in prison cell, did not come up at all.

Therefore, her arrest along with a very prominent and popular reporter, Erol Onderoglu — a representative for the renowned international nongovernmental organization Reporters Without Borders (RWB) in Turkey — and another intellectual, Ahmet Nesin, who is the son of the country's legendary satire novelist, the late Aziz Nesin, came as a shock not only in Turkey but all over the world.

Meanwhile, for the first time ever, UN Secretary-General Ban Ki-moon stressed his "worries" on developments in Turkey after his meeting with Christophe Deloire, secretary-general of RWB. Moon also expressed his "hope for the release of the three people arrested."

The European Union's foreign policy chief Federica Mogherini indicated that the arrests violate fundamental rights, including freedom of the press, and said the EU emphasized many times the need that "Turkey, as a candidate country, must aspire to the highest possible democratic standards and practices."

European Parliament’s President Martin Schulz, who only a day ago had announced that he suspended the process of granting visa-free travel for Turkish citizens because of Turkish President Recep Tayyip Erdogan’s "unacceptable conduct," tweeted that the jailing of Nesin, Fincanci and Onderoglu is "against free press and EU values."

The outrage against the arrests of the three Turkish human rights activists was at a peak in Germany. All political parties are mobilized, asking the German government and the EU to pressure the Turkish government to release the arrested immediately.

The alleged "crime" of Fincanci, Onderoglu and Nesin is joining a solidarity action with the pro-Kurdish daily newspaper Ozgur Gundem, which is accused of being the mouthpiece of the outlawed Kurdistan Workers Party (PKK) and whose 12 members were arrested. Since May, a number of prominent Turkish intellectuals began a solidarity campaign with the paper for the sake of freedom of the press.

Since then, a Turkish intellectual goes to the office of Ozgur Gundem every day and symbolically acts as the editor-in-chief of the paper at the news desk and chairs the meeting. The three arrested are among the pioneers, but all together 44 people committed the same "crime."

The Turkish judiciary, which is seen as increasingly controlled by Erdogan, stepped in and charged the ones showing solidarity with the allegedly pro-PKK newspaper for rendering support to terrorism. According to Turkey's controversial anti-terror law, those who allegedly support terrorism can be considered terrorists as well.

The result has led to handcuffing three prominent human rights activists in Turkey and sending them to jail.

A similar fate now awaits the 44 well-known intellectuals, journalists and academics who joined the same solidarity campaign for Ozgur Gundem.

What has befallen Fincanci, Onderoglu and Nesin did not act as a deterrent. Only a few hours after they were put in jail, Can Dundar — the editor-in-chief of the daily Cumhuriyet, who has become an international figure himself — took over the symbolic post of editor of Ozgur Gundem and chaired the meeting at the news desk. He declared that he is determined to commit the same crime of those jailed in an act of solidarity.

What has happened to Fincanci, Onderoglu and Nesin is a watershed. Soon, we will understand whether Turkey has crossed the Rubicon of drifting into an authoritarian or a quasi-totalitarian regime or whether there is still hope that it may return to the road to democracy.