Why is Turkey wasting its time arresting peace advocates?

The arrest of renowned author Asli Erdogan on terrorism charges generates questions about Turkey's arbitrary use of emergency law. 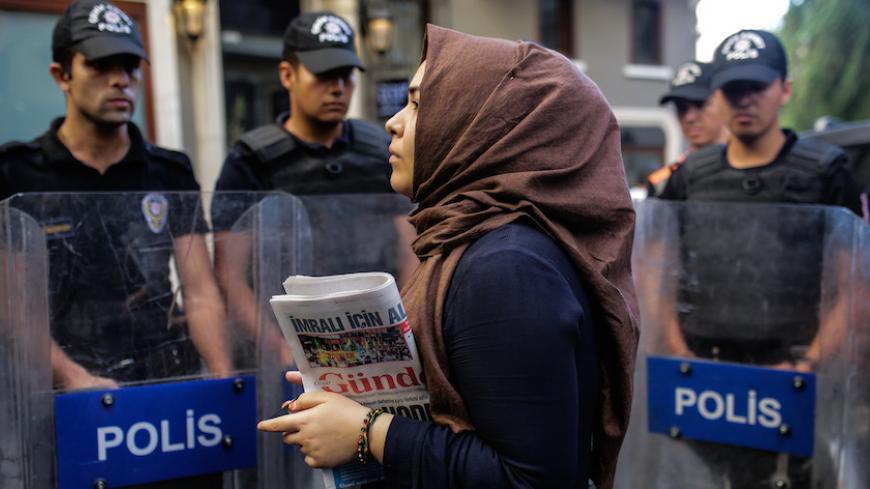 A woman holds an Ozgur Gundem newspaper in front of a police barricade in Istanbul, Aug. 16, 2016. - YASIN AKGUL/AFP/Getty Images

On Aug. 16, Ozgur Gundem, one of the few remaining independent news outlets in Turkey, was closed by a decision from Istanbul's 8th Court of Peace. Pro-government newspaper Sabah reported the news as “PKK’s [Kurdistan Workers Party] newspaper is shut down. It was a tool for both the PKK" and followers of self-exiled cleric Fethullah Gulen. Police raided the offices of Ozgur Gundem and the homes of several columnists and staff and detained them.

Some employees were taken into custody for “spreading terror propaganda,” according to the official explanations.

The reports from the raids were quite scary. For example, editorial cartoonist Dogan Guzel was photographed in handcuffs being pulled out of the building with a torn T-shirt and bruises and marks on his face and body.

Twenty-four journalists from Ozgur Gundem, IMC TV and DIHA news agency were taken into custody, including Asli Erdogan, a renowned author, human rights activist and columnist. Erdogan was named one of PEN International's "most promising 50 authors of tomorrow” and has received multiple prestigious literary awards.

Erdogan is a brilliant woman who was educated at Turkey's best schools. She has a degree in computer engineering and physics, but decided to focus on literature in the early 1990s. Erdogan has represented Turkey on several international platforms. From 1998 until 2000, she was the Turkish representative of the International PEN’s Writers in Prison Committee. Until June, Erdogan was a writer in residence in Krakow, Poland, for the International Cities of Refuge Network.

She has written for other left-wing newspapers as well, always focusing on issues the majority of columnists would not dare: torture, Kurdish rights, human rights violations in prisons and violence against women. Internationally respected for her literary works — which are translated in several foreign languages — and her human rights battles, Erdogan has stood up for those in need for the past two decades. Her impressive achievements were even acknowledged in 2013 by Turkish Radio and Television in a documentary detailing her life and works.

Erdogan has been persecuted for her human rights activism before, having to live in exile, being subjected to social lynching and losing her jobs. Still, she has not been deterred. That must be why she was part of a solidarity program called Editor-in-Chief on Watch for Ozgur Gundem, one of the most troubled publications in modern Turkish history. Just to put it in perspective, the newspaper was completely shut down by court order from 1994 to 2011.

On Aug. 19, the majority of Ozgur Gundem's personnel were released, but Erdogan was officially arrested. Her lawyers objected that she couldn't be arrested for simply having her name on the newspaper's board as part of the solidarity program — though she isn't the first.

Erdal Dogan, one of Erdogan’s attorneys and a prominent human rights activist, told Al-Monitor, “In the official documents it is stated that Erdogan was arrested for her writings. However, when we look at what are in these writings that the prosecution said support a terror [operation], what we see is that Erdogan supports human rights, peace and stands up against violence. As a female Turkish author she stands in solidarity with the Kurds, Alevis and all ‘others’ who are discriminated against, without being apologetic. On top of it all, she dares to write for Ozgur Gundem.”

Human rights activist and Alevi Bektasi Association Chairwoman Hatice Altinisik concurred with Dogan and said, “Erdogan is a Turk, a 'White Turk.' And she is now in custody for being a member of the PKK. Because she was on the board of Ozgur Gundem, a newspaper that struggles to be a voice for the suppressed, she is seen as being a member of a terror organization. In a sense, the political opposition is labeled as terror. Now Erdogan here is persecuted to set a precedent for other White Turks. This decision is telling them, 'Do not get involved with the Kurds.' This is not the first time; they tried to make Pinar Selek out to be a terrorist and it failed. It will fail with Erdogan as well.”

Al-Monitor spoke with several prominent columnists and academics and almost all of them agreed with Altinisik’s view that if an ethnic Turk from the upper middle class supports the Kurdish cause or the rights of those who are suppressed, that would be a major threat for the ruling Justice and Development Party (AKP), because it brings further attention and justification to the suffering of the Kurds, Alevis and other minorities.

Indeed, a prominent scholar who studies immigration issues told Al-Monitor on condition of anonymity, “Erdogan fights against discrimination. She has been the voice of even African immigrants to Turkey. Going over Erdogan’s writings, you cannot find any arguments specifically supporting the PKK or encouraging any sort of violence. However, she dares to do what even most of the upper middle class Kurds would not do, and that is not good news for the AKP. Erdogan in jail sends a message to all of us to be silent — and, in a sense, to be complicit with the atrocities of the state.”

This could explain the difficult and inhumane conditions Erdogan is being subjected to in prison. She answered questions from the daily Cumhuriyet in a letter.

“I have not been physically tortured. However, ill-treatment in prison will leave permanent damages on my body. I am not given water or my medications. I have diabetes and require a special diet; without it all my body suffers," she said. "The mattress I am to sleep on is imbued with urine, and as an asthma patient … I have not had any access to fresh air.”

It was particularly painful to read Erdogan’s answer to the question about what she plans to do first upon her release: “I will have a 16.08.2016 [the day police raided her home] tattooed on my left arm, just like female prisoners in Auschwitz," a Nazi concentration camp.

This is Turkey after the July 15 failed coup, a Turkey where emergency laws allow additional restrictions on the rights of those detained. It does not help that pro-government newspapers claim the Gulenist movement has been cooperating with the PKK. The evidence for this claim is shaky. For example, a 2010 case in which more than 3,000 Kurdish activists, politicians and intellectuals were prosecuted is now under scrutiny because most of the prosecutors and judges on those cases are being taken into custody for allegedly being Gulenists.

Using terrorism laws arbitrarily and widely against people who are not involved in any stage of violence is counterproductive for the AKP’s goals.

For one, if Turkey is serious in seeking Gulen’s extradition from the United States, Ankara should realize indiscriminate arrests of intellectuals hurt Turkey’s credibility internationally. The inevitable question becomes: "Is this really a war on terror or a political witch hunt?" The more the government conflates stories of Gulenist crimes with opposition figures, other terror organizations and foreign countries' secret services, the less credibility the stories have in the eyes of political observers. This confusion may work in the short term for angry domestic audiences, but overall it hurts Turkish national interests.

Second, it distracts authorities from focusing on what really matters: those who have generated and are planning to generate terror attacks that cost Turkey lives and money. After July 15, the workload of the courts has increased dramatically, which inevitably will affect the quality of deliberation and due process. All of these factors weaken confidence in Turkey's legal system, which is already seen as practicing “legal violence” against innocent people.

Turkey is suffering from simultaneous attacks by three potent terror organizations: the PKK, the Islamic State and the Gulen movement. Shouldn't taxpayers' money be spent to prosecute those who create violence rather than those who create ideas for peace and justice?