Is Turkey on the fast track to fascism?

The July 15 coup in Turkey failed, but for many citizens, the country's upheaval carries all the signs of a regime change nonetheless. 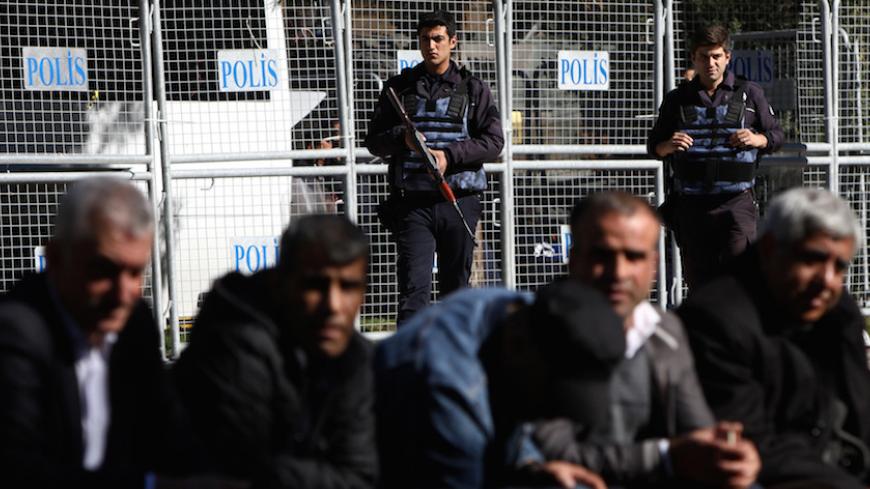 Riot police stand guard in front of a courthouse during a gathering to protest against the arrest of pro-Kurdish Peoples' Democratic Party (HDP) lawmakers, in the southeastern city of Diyarbakir, Turkey, Nov. 4, 2016. - REUTERS/Sertac Kayar

An email I received around noon today from a young Turkish academic with impeccable credentials, whom I know very closely, ended with the following precautionary note:

“*PLEASE — don't forward the email; only copy and paste if you would like to share and do not include my name in it.”

Naturally, I am withholding his name, but will share most of his message:

The reason is the long-[expected] arrest last night of Selahattin Demirtas and Figen Yuksekdag, co-presidents of the [pro-Kurdish] Peoples' Democratic Party (HDP), which garnered 6 million votes in Turkey's last parliamentary election and is the second-largest opposition party in Turkey. Nine other HDP deputies have been arrested as well. A blast, most likely by the terrorist organization PKK [Kurdistan Workers Party] — not confirmed — shook Diyarbakir this morning and at least 30 people have been wounded and eight killed, including five police officials. [Editor's note: These numbers have since been updated to two police officials and seven civilians, with a possible 100 people wounded, most not seriously.]

Eastern Turkey has already been subject to internet cuts for the past week as the co-mayors of Diyarbakir, Turkey's largest Kurdish city, have been jailed. This morning I had to get news from television, which now almost exclusively broadcasts pro-government channels. Over the past few weeks, tens of opposition channels, radios and even literary journals have been shut down.

The latest victim was Cumhuriyet (think on the scale of the Guardian or Washington Post), one of the country's longest-running opposition newspapers, whose editor and executives are now behind bars. This comes on top of the purge of thousands of people from the civil service, academia and private sector on charges of membership in 'terrorist networks.' The definition of that now includes almost anyone who opposes the government/state. It even includes Germany, the government of which yesterday was declared a supporter of terrorism. For almost 10 weeks, I have been part of a solidarity initiative for Asli Erdogan, one of Turkey's most celebrated novelists. She has been in prison since Aug. 19 for her advisory role for Ozgur Gundem, a pro-Kurdish newspaper. Yet advisers bear no legal responsibility under the law. She hasn't yet seen a judge.

Turkey is fast transforming from a so-called 'model democracy' into an Islamo-Turkist fascist state that is returning to the brutal tactics toward freedom and dissent it has exercised throughout its history. … At the moment, we need all the pressure we can get from the international community to stop this madness. Please write on social media, tell your friends and influential acquaintances, write to your representatives, participate in solidarity initiatives. Anything. We'll get through this but outside pressure can help; it always has for a country like Turkey that needs international cooperation for a functioning economy and stability.”

Except for the last paragraph, which is a call for solidarity from the international community, the rest is the best summary of items I had intended to write for Al-Monitor in reference to all the dramatic developments. These include the arrests of the co-mayors of Diyarbakir, which is the symbolic Kurdish political center of the region — not only of Turkey’s Kurds, but Kurds in each part of the Middle East. I also planned to include the police raid on the homes of some staffers of Turkey’s oldest daily, Cumhuriyet, including the editor-in-chief, its chief cartoonist and 11 prominent columnists, under unwarranted charges.

All of them were put under detention and have been denied access to lawyers for four days. Among them were two septuagenarians, as well as Kadri Gursel, a fellow Al-Monitor columnist who is also the Turkey representative at the International Press Institute in Turkey.

Both developments — the one involving the Kurds and the other Cumhuriyet, which is considered the bastion of secular thought in Turkey — constitute a turning point for the country and will perhaps have an impact in the much broader geopolitical landscape.

In the early hours of Friday, while I was getting ready to write this column for Al-Monitor, the news broke on the detention of 12 HDP deputies, among them the two co-chairs, the popular rising stars of Turkish politics, Demirtas and Yuksekdag.

At the time of this writing, a few were being released from detention, but some — including the co-chairs of Turkey’s third-strongest party represented in the parliament — were being arrested. Since the failed July 15 coup, while writing for Al-Monitor I have always had the uneasy thought that what I write could be outdated, both in scope and content, by the time it's published, given the speed of the drastic developments that take place.

That is precisely what happened during the course of one week.

A week ago, in the Iraqi Kurdistan Regional Government (KRG) capital of Erbil, I was having breakfast with HDP deputy Osman Baydemir, better known as the former mayor of Diyarbakir. His cell phone rang. On the other end was Firat Anli, his successor as the co-mayor of Diyarbakir. Baydemir passed the phone to me, and Anli told me that he was also to be in Erbil, yet due to a decree under the Turkish state of emergency, mayors who want to leave the country need the Interior Ministry's permission. Because of the red tape and bureaucracy, he had declined the trip.

That very night, we heard he had been put under detention along with the other co-mayor, Gultan Kisanak. Both were arrested after 48 hours. Baydemir, a panelist at the Middle East Research Institute Forum in Erbil like myself, was in a hurry to go back to Diyarbakir. As we once again sat at the breakfast table, he said with a stern expression on his face, “Maybe it would be an exaggeration to make the following analogy, but this [detaining the co-mayors of Diyarbakır] would be very similar to the Baghdad government detaining Nechirvan Barzani, the prime minister of KRG, here in Erbil."

An hour later, before he got into a car to make the five-hour trip back to Diyarbakir, he hugged me to say farewell and whispered, “Maybe the next time we see each other will be after I am released from prison!”

Since then, the suppression has reached unprecedented levels, involving the Kurds and the last remaining secular opposition media outlets like Cumhuriyet.

European leaders — above all German President Joachim Gauck, who has a very bright record of human rights activism — began to voice their worries on the latest developments in Turkey.

The dollar and the euro hit record lows against the Turkish lira.

I received a phone call from London from a Turkish financial expert who had occupied high posts at Goldman Sachs. He referred to the Turkish financial markets' increasing volatility due to the repressive measures, and particularly the crackdown on pro-Kurdish HDP parliament members. “Do you agree with me that Turkey is on the verge of becoming a second Syria?”

It seems I have made a reputation of ringing alarm bells on the “Syrianization of Turkey” for a long time. Despite that, I refrained from openly agreeing with such a characterization. Instead, I responded, “With what happened in the last week and in the last 24 hours, Turkey is steadily moving on the road to fascism!”

The latest developments, for many in Turkey, are so dramatic they amount to a regime change. What the developments imply, however, in the wake of the failed coup, is nothing as natural and expected as democracy — but just the opposite.