Furious over the arrest of their co-mayors, the Kurds of Diyarbakir are protesting by the thousands, but the crowds would be larger if the population weren't exhausted by the ongoing conflict with the Turkish government and afraid of being targeted. 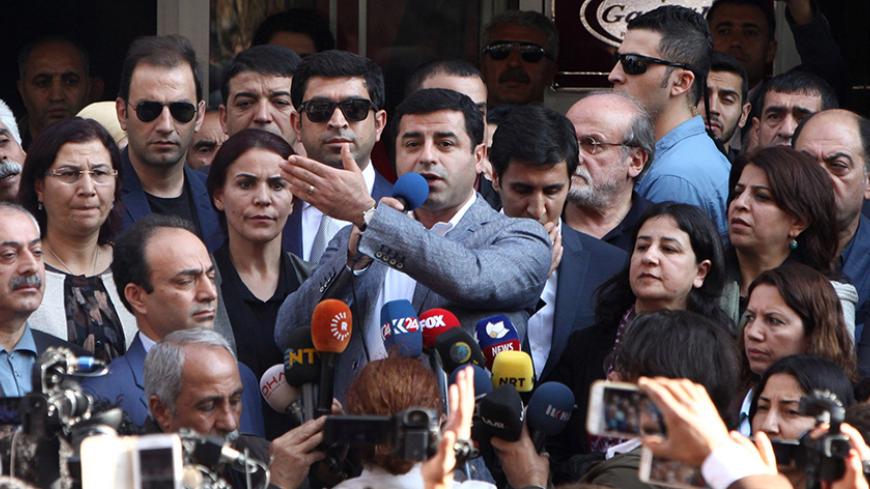 Selahattin Demirtas, co-leader of the pro-Kurdish Peoples' Democratic Party, talks during a protest against the arrest of the city's popular co-mayors for alleged links to terrorism, in the southeastern city of Diyarbakir, Turkey, Oct. 27, 2016. - REUTERS/Sertac Kayar

Turkey’s Kurds protested the detentions of the co-mayors of Diyarbakir, the country’s largest Kurdish-majority city, for a second day, even as a government-imposed internet outage across the mainly Kurdish southeast provinces disrupted efforts to organize.

In Diyarbakir, Selahatttin Demirtas, the co-chair of the largest pro-Kurdish bloc, the Peoples' Democratic party (HDP) vowed to keep up the protests until Gultan Kisanak and Firat Anli, both arrested Oct. 25 on terrorism charges, are set free. Addressing several hundred people gathered outside the Diyarbakir city hall on Oct. 27, Demirtas accused the ruling Justice and Development Party (AKP) of waging a “dirty war” against the Kurds. Demirtas said the government does not respect “justice, the constitution, nor political ethics.” The only means “to defend against such oppression is to resist, to escalate the struggle,” asserted Demirtas.

A local prosecutor in Diyarbakir filed charges against Demirtas soon after his speech claiming, among other things, that he had incited the pubic to disobey the law and insulted Turkey's president. Demirtas is already facing scores of similar criminal charges, and there is widespread speculation that he too could eventually end up behind bars.

But the public response to the HDP’s daily calls has been lukewarm, as gloatingly noted by pro-government outlets. “The people told the HDP enough already,” blared the pro-AKP daily Star newspaper on its front page. Like many other publications, the paper claimed that the Kurds were spurning the party’s calls to action. “Even [Diyarbakir] municipal workers did not heed them,” Star said.

A prominent businessman in Diyarbakir agreed that locals were not mobilizing in large numbers, telling Al-Monitor, “People are simply fed up and want to get on with their normal lives.”

The businessman, who declined to be identified by name, attributed the apathy to the violence that raged in Diyarbakir earlier this year after armed youths linked to the Kurdistan Workers Party (PKK) dug trenches and declared autonomy in Sur, the historical and commercial heart of the city. The entire neighborhood, home to ancient churches and mosques, was virtually destroyed after months of protracted street battles between the youths and Turkish security forces. Some 80,000 residents were forced to flee.

The PKK’s decision to move its battle to urban centers and embed its youth cadres in residential areas throughout the southeast was clearly a strategic blunder. When the army moved in with its tanks, tens of thousands of the PKK’s core constituents were displaced. Hundreds of civilians were killed, with no tangible gain for their sacrifice.

The so-called trench war followed 2½ years of relative calm, in keeping with a mutually observed cease-fire between the army and the PKK. This truce broke down in July 2015 amid mutual recriminations, though both sides were clearly itching for a fight.

Still, the businessman said that the level of state repression is such that “the notion that Kurdish voters will now defect to the government in droves is idiotic.”

Yet, even hardcore PKK loyalists question the wisdom of its strategy, which has seen the rebels targeting security forces and civilians alike. And the HDP is picking up the tab. Recent opinion polls suggest that if elections were held today, the HDP would fail to muster enough support to meet the minimum 10% of the national vote required to secure seats in the Turkish parliament. Not only that, PKK commanders based in Iraqi Kurdistan blame the HDP for this state of affairs, saying the party is too passive. And the AKP has been doing its best to ensure that things stay that way.

Armed with the emergency laws, the government has muzzled virtually all opposition newspapers, radio and TV channels that gave the Kurds a voice. It even persuaded the global satellite operator Eutelstat to knock the pro-PKK channel Med-Nuce off the air. Journalists rarely venture to the southeast these days and those who do often face police harassment or outright ejection from the region.

The climate of fear prevailing in the aftermath of the July 15 coup attempt is such that even the Kurds’ most stalwart backers have gone largely silent for fear of being jailed on terror charges themselves.

A veteran journalist from Diyarbakir told Al-Monitor on strict condition of anonymity, “In the old days if a mayor were arrested, hundreds of thousands of people would have poured into the streets here. Now, it’s a few thousand at best.”