The matter of suppressing the freedom of press in Turkey is getting very serious. 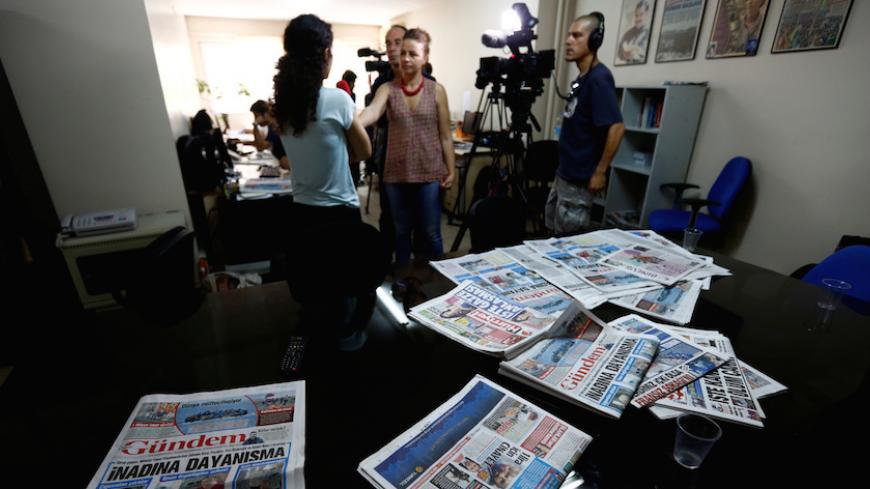 A journalist of the pro-Kurdish Ozgur Gundem gives an interview to a German TV channel in the paper's newsroom before a protest against the arrest of three prominent campaigners for press freedom, Istanbul, Turkey, June 21, 2016. - REUTERS/Murad Sezer

Aug. 30 is the date of the decisive victory won against the invading Greek force in 1922 that led to the foundation of the Republic of Turkey a year later. Since then, every year, Aug. 30 is a national holiday celebrated as “Holiday of Victory.” In effect, it is “Army Day.”

This year, because of the trauma of the failed July 15 coup attempt, military parades in the major cities of Turkey and celebratory cocktail receptions in the country and abroad did not take place.

Replacing the fanfare of previous years was a surprise: a new wave of intimidation and suppression of independent journalism. The day began with police raids on the homes of various world-renowned journalists.

We learned from Platform 24 that “on Aug. 30, detention warrants were issued for 35 journalists as part of the probe launched into the July 15 coup d’etat attempt, officially called the ‘Fethullah Gulen Terrorist Organization/Parallel State Structure (FETO/PDY)’ investigation. Nine of the 35 individuals on the most recent list were detained in raids that started at dawn.”

Platform 24 or The Independent Journalists Platform is a two-year-old watchdog organization of journalists. Its founding president is the veteran journalist Hasan Cemal, a former editor-in-chief of the daily Cumhuriyet and the senior columnist of Milliyet. Considered by many as “the dean of journalists,” he has nearly half a century of experience in the profession.

Among those for whom a detention warrant was issued was one of the founders of Platform 24, Yavuz Baydar. Baydar was not at home during the raid. Police broke down the door and entered and searched the house as if trying to find the weapon used in a murder.

Baydar won a European Press Prize in 2014 and has been a television host for 30 years. Among his many other credentials, the most important are that he has been the president of the world Organization of News Ombudsmen and has been closely associated with and known by the editors of major media outlets all around the world.

Police raids of residences have targeted many linked to the failed coup. But to associate Baydar with the coup is impossible. As Nesrin Nas, former chairwoman of the center-right Motherland Party, tweeted, “Yavuz Baydar and putschism. … They can never come together. This is mental paralysis.”

Another notable name in a detention warrant was Ali Yurttagul. He is well-known, having served the last 15 years as a political adviser for the Greens-European Free Alliance Group in the European Parliament.

Yurttagul’s residence in Istanbul was also raided. The police broke in and left a copy of the formal search log at the premise.

Yurttagul played a tremendously important role in the resolution of the European Parliament in December 2004 that opened the way for the start of Turkey’s accession talks with the European Union.

Yurttagul now advises Greens/EFA co-leader Rebecca Harms on the topic of EU-Turkey relations, and the raid on his home triggered the indignation of the Greens. Harms, in an Aug. 31 press release, said, “Mr. Yurttagul was a trusted and well-respected member of our staff and continues to advise me on relations with Turkey. I am deeply concerned at the way he has been treated.”

She also mentioned her concern about the growing number of police actions against various parts of Turkish society, including independent journalists, judges and academics.

Murat Aksoy, an Alevi by origin who is an adviser to Kemal Kilicdaroglu, chairman of the main opposition Republican People's Party, did not have the luck to not be home when the raid occurred on his residence, unlike Baydar and Yurttagul. Aksoy was detained and put behind bars.

Were they Gulenists? No. Never. A Swedish-trained leaning leftist, a German Green and a Turkish Social Democrat of Alevi faith cannot possibly be Gulenists.

A warrant also was issued for Eyup Can, the former editor of the daily Radikal and former digital press coordinator for the daily Hurriyet. He had been at the daily Zaman about 15 years ago. There is nothing to link him to the July 15 coup attempt, because for the past year or so he has been living in London with his wife, the internationally renowned novelist Elif Shafak, and their children.

Apart from their having no ideological links to Gulen or Gulenism, each one of the journalists is known to have strong anti-putschist credentials. Therefore, the detention warrants for them have nothing to do with the coup problem but rather with suppressing the freedom of press.

Many other names can be included on this list to indicate or prove that the coup probe has gone beyond the Gulenists. P24’s website regularly updates the journalists who are arrested, detained or persecuted with terms such as “Journalists detained under State of Emergency outside coup probe” and “Detentions outside the coup probe.”

The names in these lists keep growing. On Aug. 31, it was Necmiye Alpay’s turn to go to jail. A respected academic in her field, an expert on linguistics, and a peace activist whose name appeared on the highly symbolic advisory board (that never meets) of the recently banned pro-Kurdish daily Ozgur Gundem, Alpay was sent to prison under the charges of “aiding a terrorist organization.”

The matter of suppressing freedom of press is getting very serious. Cemal was summoned to police headquarters along with eight others for being at the Ozgur Gundem offices in May to display solidarity, months before the coup and the ban on the daily.

I spoke with Baydar, Yurttagul, communicated with Can and finally with Cemal.

He was at home. I realized later when I read his T24 column that he had not shared his true feelings with me. He had sounded somewhat sanguine on the other end of the phone.

But in his column, he had presented quite a different mood. In the previous two days he had been hearing about the detention warrants for colleagues and the arrest of Alpay, whom he had known since his youth. After shuttling back and forth between prosecutors all day responding to the charges against him, he had come home. He had morosely placed a glass of whiskey in his hand and watched a documentary about Ernest Hemingway.

The following are his concluding lines:

“I was in a very bad mood while watching a documentary on Hemingway on television. At one point there was a sign that said, ‘In this bar, you don’t drink to get drunk, you drink not to wake up sober!'

“I murmured to myself, ‘Can I find a bar like that one?'

“The phone rang. I was asked to go to the police to account for my stand of solidarity at the premises of Ozgur Gundem.

When I read his lines, I asked myself, “Has Turkey itself, already, turned out to be Hemingway's bar?”