The Erdogan government’s crackdown on "enemy within" includes free press; Iran and Russia may gain from strains in US-Turkey ties; Aleppo key to "undivided Syria"; Iran likely to deepen ties with Russia over Syria. 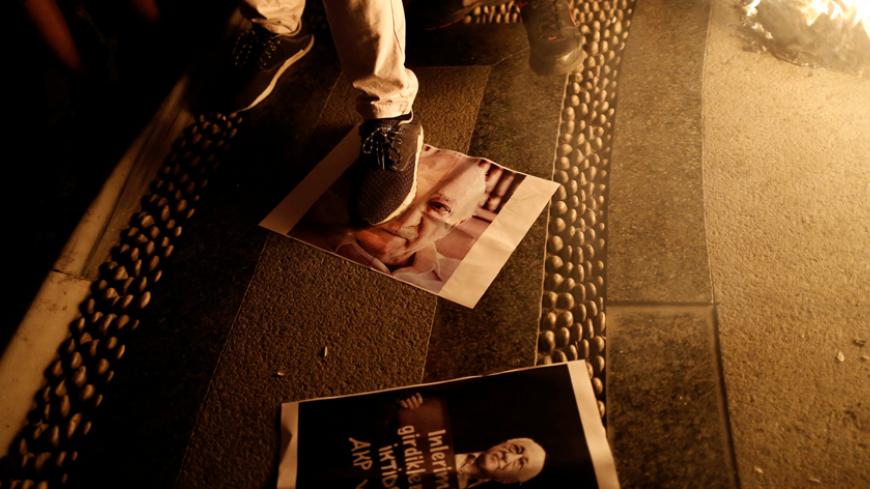 A supporter of Turkish President Recep Tayyip Erdogan steps on a photo of US-based cleric Fethullah Gulen during a pro-government demonstration at Taksim Square in Istanbul, July 18, 2016. - REUTERS/Alkis Konstantinidis

Mustafa Akyol writes that the attempted military coup in Turkey on July 15 and subsequent crackdown by the Turkish government has “opened a whole new chapter in the nation’s history. The followers of Fethullah Gulen, seen by most political groups and ideological camps as being behind the coup, have become the national 'enemy within.' This perspective, of course, has quite worrying consequences, for it leads to collective demonization and punishment, and the Gulen community includes many innocent people who are unaware of the group’s darker side. How to uphold the rule of law in the face of hysteria over a powerful threat is a challenge that should concern everyone.”

The collective demonization and punishment described by Akyol includes independent media and journalists. Even before July 15, Turkey ranked 151 out of 180 countries on the Reporters Without Borders “Press Freedom Index,” which described a campaign by the Turkish government in which “journalists are harassed, many have been accused of 'insulting the president' and the Internet is systematically censored. The regional context — the war in Syria and Turkey’s offensive against the PKK [Kurdistan Workers Party] Kurds — is exacerbating the pressure on the media, which are also accused of ‘terrorism.’”

The report adds that “the media and civil society are nonetheless resisting [Turkish President Recep Tayyip] Erdogan’s growing authoritarianism,” as is well-known to readers of Al-Monitor’s Turkey Pulse.

Reporters Without Borders noted less than one month after the coup attempt that Turkey had achieved the nefarious distinction of “world leader in imprisoned journalists.” And, believe it or not, it may be getting worse. Cengiz Candar reports that on Aug. 30, historically celebrated as “Holiday of Victory” or “Army Day” in Turkey, there were no such celebrations and parades, reflecting the grim and tense mood of a society dominated by accusation and purge. Instead of parades, the holiday ushered in another round of crackdowns on prominent journalists for alleged ties to the Gulenist movement. Candar writes, “Replacing the fanfare of previous years was a surprise: a new wave of intimidation and suppression of independent journalism. The day began with police raids on the homes of various world-renowned journalists.”

Candar explained that the failed coup merely provided the catalyst and context for the government to intensify its already wide-reaching campaign against independent media. “The matter of suppressing freedom of press is getting very serious,” Candar concludes after speaking with journalists now facing intimidation and harassment, including Hasan Cemal, a former editor-in-chief of the daily Cumhuriyet and the senior columnist of Milliyet. “Cemal was summoned to police headquarters along with eight others for being at the Ozgur Gundem offices in May to display solidarity, months before the coup and the ban on the daily.”

Turkish reset on Iran and Russia

Russia and Iran appear to benefit from a deterioration in US-Turkish relations over Syria, the US response to the failed coup and Ankara’s request for the extradition of Fethullah Gulen.

Semih Idiz writes, “The failed coup in July appears to have also strengthened Erdogan’s hand in Syria against the United States. Russia and Iran condemned the coup attempt outright, without waiting to see its outcome, which is the opposite of what the West did in Turkish eyes.”

He added, “The result is that many Turks consider Russia and Iran to be more reliable than Western countries. After Turkey reset its Syria policy, Ankara is also closer to Moscow’s and Tehran’s positions regarding the future of Syria. Ankara is better poised now to get Russian and Iranian support for its approach to Syrian Kurdish aspirations.”

Complicating matters further, Idiz notes, is “the perception that the United States is reluctant to extradite Fethullah Gulen, the alleged mastermind of the attempted coup, has also resulted in a sharp increase in anti-American sentiments among Turkish government officials."

Fehim Tastekin argues that even if Erdogan is resetting Turkey’s Syria policies, the next steps are all high risk. According to Erdogan, the military operations are to continue “until the YPG [People's Protection Units] is no longer a threat," which will lead to further tension with the United States.

Tastekin explains, “It won't be easy for Turkey-supported armed groups to hold the de facto buffer zone. Their capabilities and capacity are limited. They can advance or hold on to a position only if there is an army like the TSK [Turkish Armed Forces] behind them. If the buffer zone is to be secured by increasing TSK's presence on the ground, that would put Turkey in the position of occupier, ushering myriad of problems it would have to cope with both on the ground and in the international arena. … Building a town for refugees without coordinating with the Syrian administration will only consolidate Turkey's occupier status. Moreover, settling refugees in a risky area is bound to provoke humanitarian and legal arguments.”

An Iranian military source told Ali Hashem that the “battle of Aleppo is not a battle for a city or a province, it is a battle to keep Syria undivided.”

Hashem writes that despite the huge stakes in Aleppo for the Syrian government, “Turkey is enjoying a Russian-Iranian blind eye and minimal Syrian condemnation, as the objectives of this specific battle serve their agendas: solidifying the stance of the Syrian regime and ending the ambitions of Syrian Kurds for a state. Never mind that in the long run, a Turkish victory with the help of opposition fighters could have dire consequences for the battle in the center of Aleppo.”

A field commander told Hashem that if the Syrian government and its allies retake Aleppo, “the province will be next. … The battle seems to be over a passage, but this passage is as important as the whole province.”

Iran and Russia likely to expand "tactical" ties over Syria

Ali Omidi reports from Iran that despite historic tensions in Russia-Iran relations, the tactical alliance between Tehran and Moscow in support of the Syrian government is likely to grow. “Strategic cooperation with governments that share Iran’s interests in Syria would not be difficult to forge,” Omidi writes. “Indeed, the decision to allow the Russians on Iranian soil was made by the Supreme National Security Council, consisting of representatives from all pillars of power in the country. Given this, the opposition expressed by 20 lawmakers in the 290-member parliament is insignificant by comparison and cannot be the reason for Russia’s sudden departure from Hamedan.”